Eating More Plant-Based? Here Are the Top 14 Vegan Chefs You Need to Follow 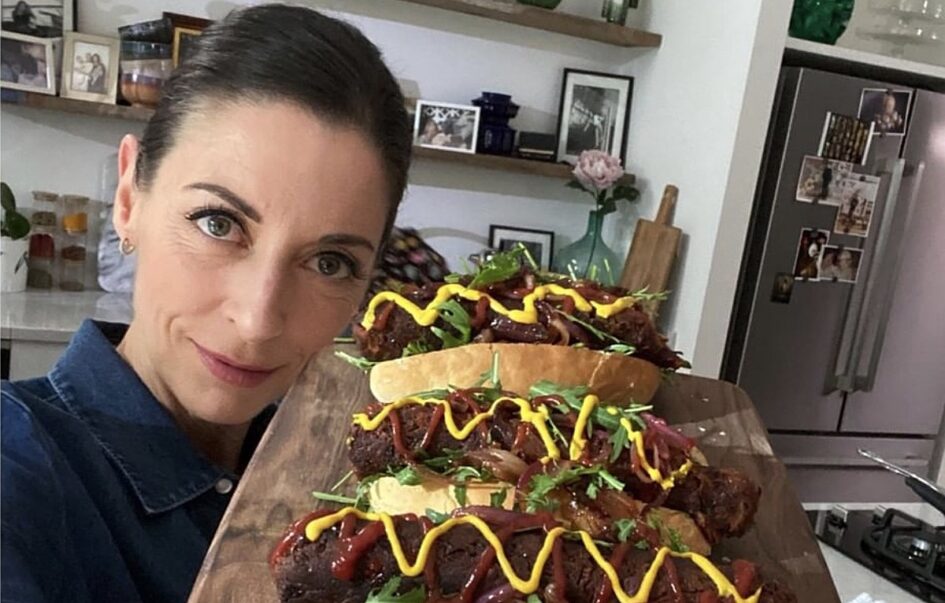 If you’re trying to eat more plant-based in 2022 you are in the majority. More consumers than ever are trying to eat plant-based at least some of the time, as a way of staying healthy, benefiting the environment, and being kinder to animals. It’s also a great way to lose weight, if that’s a goal.

But before you jump to the conclusion that eating vegan food means the death of all things tasty and delicious, consider that some of the best chefs in the country are adding plant-based dishes to their menus. And there is a cast of thousands of amazing chefs who make their names based on serving up delicious, satisfying, and affordable vegan food offerings, dishes that would win any cooking show.

Globally, 60 percent of consumers believe that plant-based diets are going to be a fundamental shift in how we eat, according to the Good Food Institute, and recipe developers have popped all over social media to create exciting, delicious homemade meals to meet the demand.

The Beet compiled a list of the top vegan chefs and plant-based recipe developers you should follow. Each one showcases a different type of cuisine or specialty, and each has shown how creative and inventive you can be when cooking plant-based. Start sending your likes their way.

Lauren Toyota brings a new and irreverent attitude to plant-based cooking. Creator of the popular blog, Hot for Food, she has authored two plant-based cookbooks, Hot for Food Vegan Comfort Classics: 101 Recipes to Feed Your Face in 2018, compiling everything from the Best Vegan Ramen to Raspberry Funfetti Pop-Tarts. Now she just came out Hot for Food All Day: Easy Recipes to Level Up Your Vegan Meals, leaving any hungry reader drooling over the pages of recipes like Tokyo Street Fries.

Jessica Seinfeld pulls no punches when it comes to her approach to vegan food. Not a vegan herself she takes the stigma out of labels and her cookbook, Vegan, at Times, serves up delicious plant-based classics that will make any family love dinner and not even notice it’s plant-based. No matter when you eat vegan, Seinfeld wants to help people start whenever they feel ready.

Seinfeld feeds her family this way, she says, including famous husband, Jerry Seinfeld, and their three kids but other than that she doesn’t attempt to persuade people to eat vegan. Instead, she highlights how easy it is including her Mac and Cheese. Follower her on Pinterest or Instagram.

Working alongside her father, Sir Paul McCartney, and sister Stella, Mary McCartney has been a long-time advocate for Meat Free Mondays which they started in 2009 in honor of the late Linda McCartney, a vegetarian. It has since taken off as Meatless Mondays worldwide. The trio released The Meat Free Monday Cookbook in 2011, filled with tons of vegetarian options for any home cook and another recipe book last year of Linda’s all-time favorites called Linda McCartney’s Family Kitchen.

Mary also published two of her own vegetarian cookbooks: Vegetarian Home Cooking and At My Table: Vegetarian Feasts for Family and Friends. She has a popular cooking show on The Food Network called Mary McCartney Serves it Up. She is an outspoken environmental activist and has joined campaigns against the meat and dairy industries to reduce climate change and promote animal rights. Check out her Instagram or website for recipes and sustainable activism.

Chef Chloe Coscarelli stepped into the culinary limelight when she became the first vegan chef to win Food Network’s Cupcake Wars. The chef showcased the outstanding potential for plant-based desserts. Soon after she opened a series of vegan restaurants called byChloe that had lines forming down the block for her treats, salads, and more.

Coscarelli has published four best-selling cookbooks, including Chloe Flavor, Chloe’s Kitchen, Chloe’s Vegan Desserts, and Chloe’s Vegan Italian Kitchen. Her fanbase assure that every new cake goes viral. She is a regular on talk and food shows but her true happy place is in the kitchen. Whether it’s on Youtube, Instagram, or her website, Coscarelli shows you that it’s easy to be vegan and still enjoy the highest level of baked goods, treats, and desserts.

Ellen Charlotte Marie – whose real last name is De Meulemeester – started food blogging nearly eight years ago, focused on healthy eating. However, as she started incorporating more plant-based foods into her diet, Demeulemeester decided that she wanted to adopt a fully plant-based diet. Her Instagram encouraged her followers to try going vegan as well, and she showed them that it could include eating exciting, cutting-edge vegan dishes.

De Meulemeester launched the Effortlessly Healthy app to bring plant-based recipes directly to people’s phones. The app features more than 100 plant-based recipes with new additions every month. The vegan platform aims to make it easy to help people eat healthy and vegan.  She has since authored Everyday Vegan: Healthy Plant-Based Cooking for the Entire Family. Follow her on Instagram or her Effortlessly Healthy app.

Youtuber, recipe creator, and vegan phenomenon Rachel Ama should be a household name on both sides of the Atlantic since her Caribbean-style cooking and her sunny personality are mesmerizing. Her two cookbooks, Rachel Ama’s Vegan Eats, and One Pot: Three Ways make it look easy to create amazing dishes like Peanut Rice and Plaintain Burgers that are spiced and flavored to taste better than the traditional versions.

The London-based Ama launched her Youtube channel in 2017 to showcase what she calls her “naturally vegan dishes as well as cuisine that reflects her Caribbean and West African roots.” It has since expanded across several social media platforms including Instagram and personal recipe blog.

Matthew Kenney is reinventing what fine dining means within the plant-based boundaries, and his restaurants span from casual pizza or Mexican food to upscale international cuisines housed at Four Seasons hotels. Kenney’s recipe development exceeds expectations and sets new standards for plant-based and every type of dining experience. Between his 40 restaurants, his culinary school, his new frozen meals, and his work to grow plant-based dining in the Middle East, Kenney is the top innovator in the plant-based world.

Follow Kenney’s Instagram or Plant Journal to keep up with the most innovative, stunning vegan dishes that you can make at home or go to one of his restaurants to experience.

Britt Berlin started dabbling with recipe development when she was 15 years old. After she graduated from college, Britt launched her food blog The Banana Diaries as a creative outlet, to help her overcome a serious eating disorder (which she shared with her readers). In recent years, she developed it into a successful vegan blog with 114,000 followers on Instagram. Berlin shares her beautifully designed and shot plant-based recipes that bring baking to new heights. Her cookbook, Baked with Love, contains 110 allergy-friendly and vegan desserts. Just watching her artistry on her website or Instagram will keop you entertained for hours.

Mark Bittman wrote the best-selling book, Vegan Before 6 and it changed how people thought about vegan food – suddenly it was something anyone could enjoy, not just vegans, His next books all featured vegetarian and vegan options for recipes and though not all of Bittman’s recipes are vegan, his work provides an accessible starting point for people who want to try it. In 2007, he published How to Cook Everything Vegan and his techniques allowed people to transform their favorite recipes into plant-forward alternatives without abandoning their food traditions.

Today, Bittman still sits at the forefront of the food scene with his new company, The Bittman Project, where you can learn and join the dialogue about what’s exciting to him. Visit the website, follow Bittman on Instagram, or Twitter or see what he’s cooking up on The Beet.

Chef Charity Morgan first appeared in the public eye as the chef on The Game Changers who was cooking up plant-based dinners for NFL stars including her husband, Derrek Morgan of the Tennessee Titans. Her food became so popular that she was feeding dozens of meals a day and finally realized this could be an actual business. But rather than try to scale the in-person meals she has instead poured her creativity into a new cookbook, Unbelievably Vegan, featuring more than 100 plant-based recipes. Even before it was published, Morgan’s online presence is massive with 148,000 followers.

Morgan is passionate about making sure people never equate vegan food with boring. She created a vegan wedding menu for Miley Cyrus and Liam Hemsworth, and all the celebrity guests loved it. Follow her on Instagram or check out website to see just how exciting eating vegan can and should be.

Chef Derek Sarno and his brother Chad co-founded the food blog Wicked Healthy with the mission to prove that plant-based cooking is as manly as it gets. The food blog is the launchpad for the two brothers’ plant-based empire and they have since launched Wicked Kitchen line of foods, as well as the vegan seafood company Good Catch. Based in England, Derek works as the Executive Chef & Director of Plant-Based Innovation for Tesco.

The Sarnos have made mushrooms their number one source of vegan protein, and shown ways to create BBQ steaks out of Lions Mane that sizzle up on the grill and taste better than the real thing. The Sarnos are firing on all burners. The food company continues to innovate, the Wicked Healthy recipes excite and the only question their fans have is what will they conquer next?

Priyanka Naik’s plant-based cooking is unique to her background and experience, andf or her first cookbook, The Modern Tiffin, she draws on the Indian tradition of the “tiffin” which is a small tea-time or in-between meal that you eat mid-morning or afternoon on the go. Her plant-based recipes provide the perfect introduction to cooking for one or as a perfect snack for anyone who wants to dabble in vegan food but not commit to a major change.

Naik is a self-taught cook who started her blog 11 years ago as a vegetarian and has since gone fully vegan. Her following has grown and now she has over 104,000 followers on Instagram. Check out her Facebook, and Youtube channels for new recipes and tiffins.

Sophia Roe not only walked the red carpet at this past year’s MET Gala, but also was one of the chefs who helped create a fully plant-based menu for the celebrity crowd. Her true passion is helping others start their own plant-based journey and every one of her videos makes it look easy, accessible, and also chic.

While Roe doesn’t call herself vegan, she does exclude animal products from her recipes.  Whether you check out her Instagram, Youtube, or VICE TV show Counter Space, the authentic and likable chef will make you want to try what she’s cooking. Roe hopes to help combat food insecurity and discrimination in our food supply, by throwing her support behind more sustainable and equitable food systems. She is working on her first cookbook, so keep an eye out in 2022 for more from Sophia Roe.