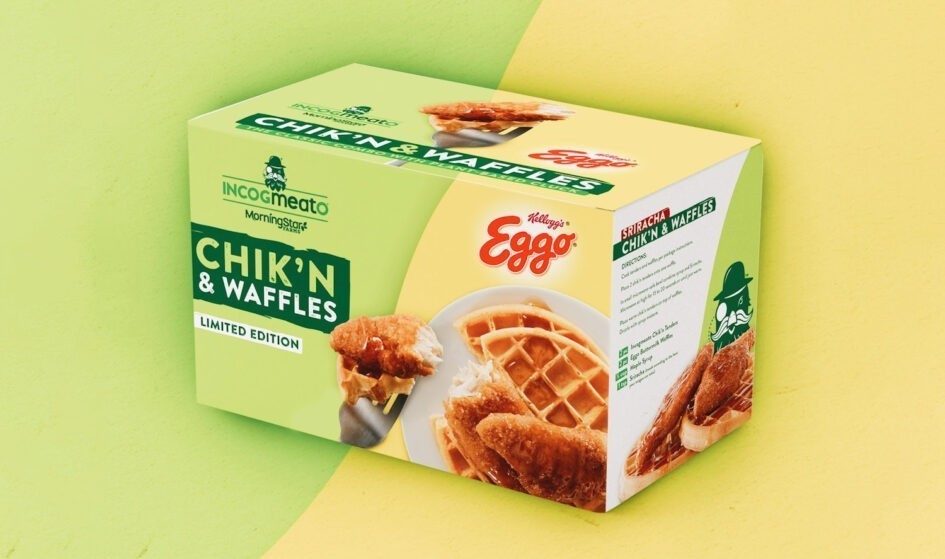 This is the first-ever meat-free chicken and waffles product from the company, well known for its frozen breakfast foods. Eggo and Morningstar Farms (both Kellog’s-owned brands) collaborated on the plant-based Chik’n and Waffles to celebrate National Waffle Day 2021.

Each pack includes Eggo’s standard buttermilk waffles, which contain both dairy and eggs, along with Morningstar’s Incogmeato Chik’n tenders, which are vegan-friendly. Each pack includes two veggie recipes: One for savory Sriracha flavor, and one for Honey Butter.

According to Incogmeato, its breaded vegan chicken tenders contain approximately 27 percent more protein than typical animal-based options. The plant-based tenders launched back in April of this year, and are currently available in stores and from a limited number of restaurants.

“We’re always looking for new ways to make vegetarian foods more accessible for everyone, so we’re excited to partner with an iconic brand like Eggo to put a delicious new spin on a beloved dish like chicken and waffles,” said Heidi Ray, Marketing Director at MorningStar Farms.

“This limited-edition combo pack gives people another opportunity to see how delicious plant-based [food] can be and experience our Chik’n Tenders that look, cook, taste, and tear just like the real thing,” added Ray.

Chicken and waffles is one of the ultimate comfort foods, regardless of diet and lifestyle, and Eggo’s choice to add a meat-free option reflects the growing dominance of flexitarian consumers in the food and beverage market in general.

Eggo itself is enduringly popular. It has enjoyed several significant, temporary boosts in sales coinciding with the airing of Netflix’s sci-fi horror Stranger Things (2016-present).

The character of Eleven, played by vegetarian actor Millie Bobby Brown, is a big fan of Eggos, and each appearance of the frozen breakfast treats in the show gives the nearly 70-year-old brand increased cultural relevance—sparking additional contemporary consumer interest.

Eggo’s choice to combine vegan protein with animal-based but vegetarian ingredients has been the go-to move for major brands in recent years, including Starbucks, Burger King, and McDonald’s. This strategy targets the growing demand for meat-free ingredients (and the environmental benefits of ditching animal protein), but with minimal menu disruption.

Looking for more vegan waffle recipes? Check out this one for a “meaty mac and cheese waffle slider” featuring pulled pork and slaw.