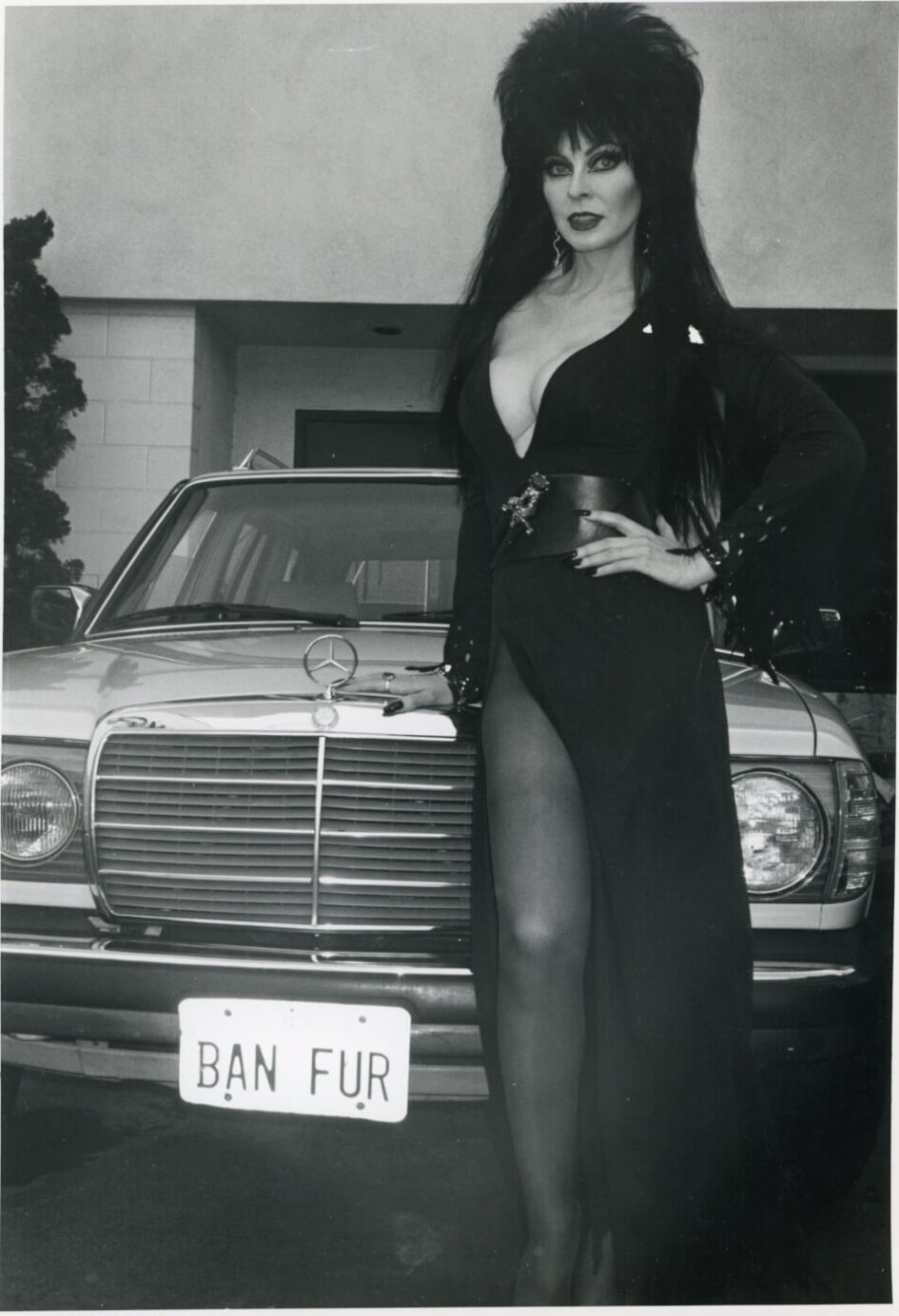 She may be the Mistress of the Dark, but when it comes to animal liberation, Cassandra Peterson (aka “Elvira”) helps others see the “lite.” Peterson’s portrayal of the “horror hostess” is legendary, as is her work for animal rights: She’s spent decades starring in PETA campaigns, protesting, strutting down fur-free runways, and otherwise getting loud for animals. And now, with her new book—Yours Cruelly, Elvira, which debuted at number four on The New York Times bestseller list—Peterson has revealed how her Elvira persona put her on PETA’s map and how her animal activism shaped the rest of her life.

The Power of a License Plate

In chapter 28 (“Lite a Flame”), Peterson reminisces about changing the license plate of her station wagon to read “BAN FUR.” With one simple action, she drove home the message that tearing the skin off rabbits, foxes, or other animals’ backs is never OK.

Gas up your own car decor for animal rights!

Drag queens were active with PETA long before RuPaul’s Drag Race hit the airwaves—and even before the art of drag had broken out of queer spaces and entered the mainstream. In clubs around the world, Elvira and other legends joined PETA for “Fur Is a Drag” parody runway shows, in which they wore trashed fur coats covered with blood-red paint.

Peterson recalls that she was offered a spot on Circus of the Stars, a television show in which celebrities performed circus acts, sometimes while forcing other animals to perform, too. Although Peterson’s initial reaction was, “Wow—fun! I love elephants!” once she discovered that circus trainers beat elephants and other animals with bullhooks and shock them with electric prods, she declined. Her refusal to partake in such exploitation ruled headlines and called attention to the cruelty that animals endure in circuses—abuse that PETA, Peterson, and countless others have helped to curb drastically in the years since, including by taking down former industry giant Ringling Bros. and Barnum & Bailey Circus.

Are you inspired by Peterson’s activism? Consider supporting our campaigns and helping to deliver a message of total animal liberation by joining the PETA Action Team:

Once you’ve signed up, check out PETA’s list of other powerful animal rights reads—these books will also get you hyped about getting loud for animals, and you won’t be able to put them down: