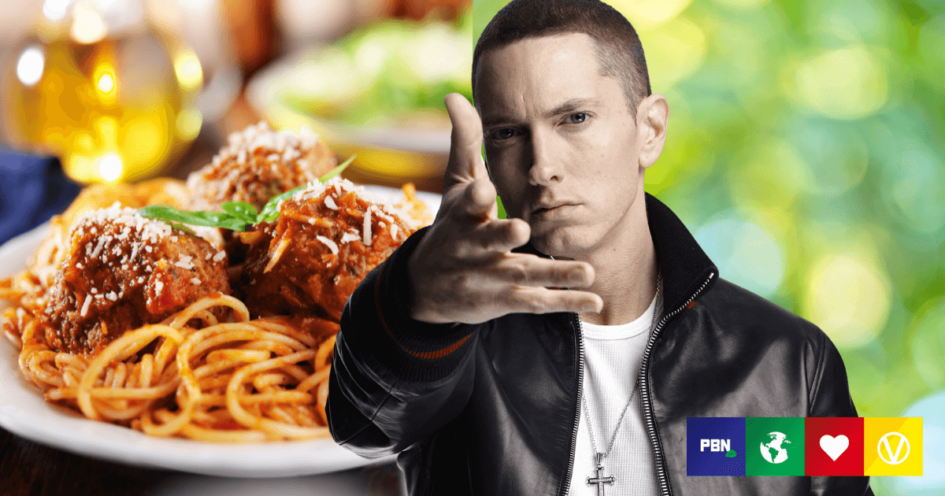 Earlier this week, American rapper Eminem opened the doors to his new vegan-friendly restaurant in Detroit.

The restaurant is called Mom’s Spaghetti, a nod to the popular lyric from his 2002 hit Lose Yourself. Unsurprisingly, the venue serves various pasta dishes.

What’s more surprising is Eminem turning up to the grand opening to serve the spaghetti himself. The Grammy Award-winner dished out piles of pasta with marinara sauce. Guests could order their meal with animal-based or vegan meatballs. The plant-based meatballs are made with black beans, quinoa, and sweet peppers.

The Grammy Award-winning rapper tested out the concept as a pop-up in 2017. The pop-up was intended to be a quirky promo for his album Revival. But an ‘overwhelmingly positive’ response from fans, according to Eminem’s manager Paul Rosenberg, made the team think twice about setting the eatery up permanently.

And it seems the hype hasn’t died down. According to Detroit Free Press, the line for the restaurant wrapped around several blocks.

​Eminem teamed up with Union Joints Restaurant Group to open the venue.

Co-owner Curt Catallo commented in a news release: “The opportunity to build a permanent location based on an incredibly meta-reference was one that everyone at Union Joints, as a Metro Detroit restaurant group, took very seriously.”

“We’re proud of the fact that we created a scratch sauce that tastes like it’s straight from the jar, and wok-firing the noodles gives it that leftover pasta snap,” he added.