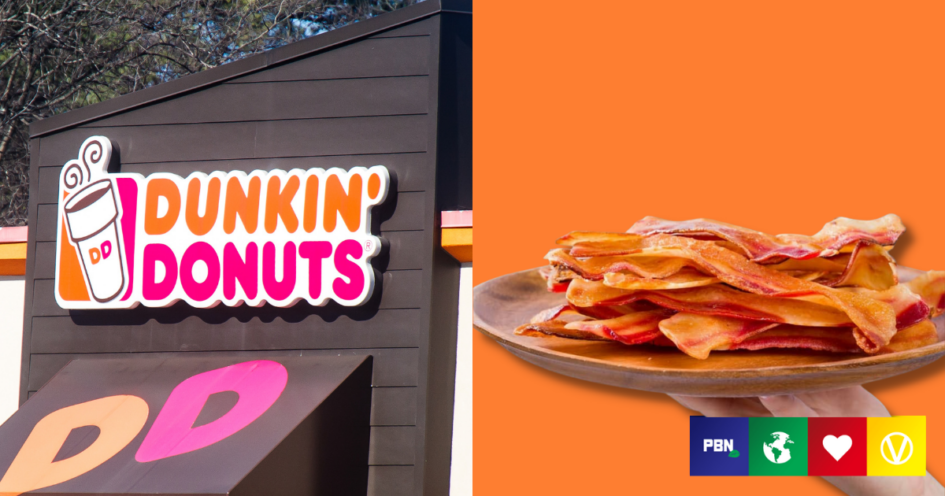 Dunkin’ CEO for more than two decades, David Hoffmann, is moving into the plant-based meat alternatives sphere by offering a helping hand to a new vegan bacon company.

Hoffman is among the financial backers of Hooray Foods, which is now celebrating a hefty $2.7 million investment.

The company creates plant-based bacon “that looks, cooks, and tastes like the real thing,” made from a blend of coconut oil, rice flour, and liquid smoke.

Its recent injection of funds means it can continue its development, following a successful launch in more than 1,000 stores up and down the US.

Hoffmann says he is looking forward to “guiding” Hooray Foods. And, he anticipates it becoming a national “must-have.”

Hoffmann is credited for bringing on board the Beyond Meat Breakfast Sandwich during his stint at Dunkin‘. The businessman has also worked high up aboard McDonald’s.

Commenting on the launch of the Beyond sandwich at Dunkin’ in 2019, Hoffmann said: “We’re all headed into a ‘better-for-you’ platform. We’re going to look at plant-based proteins as well, going forward.”

Sainsbury’s Boss Voices Fears That Vegan Food Is Too Fatty