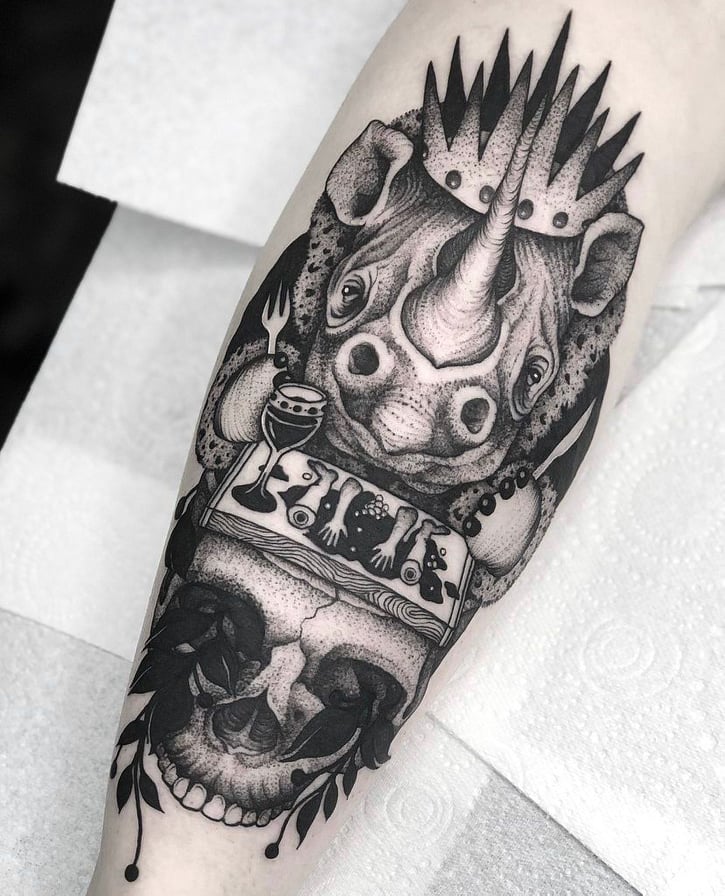 There are so many ways of effectively advocating for the vegan lifestyle. Street outreach, direct action, vegan food, fitness endeavours to name but a few. Vegan clothing displaying animal rights themes and representing organisations are also becoming increasingly popular. Anything that helps to make veganism more current and mainstream is advantageous for the movement.

Some individuals though feel the need to go one step further and permanently make additions to their skin. Vegan tattoo designs vary widely. Some depict animals and others rallying cries to be active and continue this fight for animal liberation.

Tattoos like this represent a political manifesto and a strong animal rights themed agenda. They are another way of giving the animals a voice and demonstrating a strong desire for change. The vegan symbols indicate commitment and a sense of collective.

Activists that have such tattoos are also making a permanent statement to themselves: they will continue with their activism and their veganism. It has become a large part of their identities and they will continue to work for a vegan world.

Alfredo Meschi, an Italian writer and activist, has the highest number of vegan-themed tattoos. His entire body is covered with 40,000 small crosses in honour of the number of animals killed each second in the world.

Meschi said “The era of ‘present moment art’ begins. And in the present moment, we all need to face the biggest challenge of our history – saving a planet that is dying and interrupting a holocaust of sentient beings. The first step in accomplishing these two perspectives is becoming ethical vegans. And we can do it now. Every second counts” as quoted by Livekindly in 2020.

Such a high volume of tattoos raises questions and curiosity. Meschi has turned his body into a piece of art-based activism; it has gained him international attention and a platform in which he can speak for the animals. When anyone asks him what his ink represents, he can inform them about the horrors of animal agriculture.

As such, tattoos become another form of effective activism and a means of raising awareness. Even a small ‘V’ has great significance.

Vegans should remember to specify that they want vegan-friendly ink when booking a tattoo and to source their own plant-based brands for aftercare. Tattoos can be made vegan very easily without sacrificing quality.

If you need any more information, please check out our cruelty-free guide to vegan tattoos.