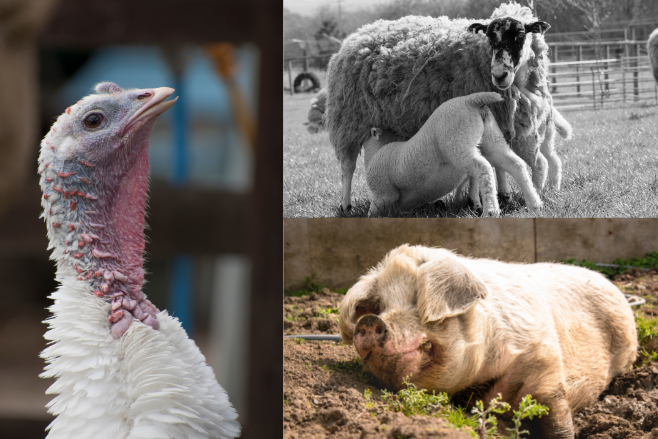 Now their  tenancy agreement is nearing its end, The Farm Animal Sanctuary’s 600-plus residents are at risk of losing their home

Now that the news of their plight has come to light, the sanctuary’s founder, Jan Taylor, has released a heartfelt mission statement, containing info about their dilemma, and the animals in their care who need help: “They come to us as broken animals. We give them back their life. Our animals need to stay at Manor Orchard Farm for the rest of their lives. We promised them a forever home, and we will
keep that promise. We need YOUR help to make this possible.”

“We have been given the opportunity to buy Manor Orchard Farm before our tenancy agreement expires in December 2025. We have to do this, for welfare reasons and on Veterinary advice we wouldn’t be able to transport many of our animals, although healthy and living a contented life. These would include Arnie, a blind horse, aged and blind sheep, sheep with mobility problems, such as Queenie who has had a leg amputated. There is nowhere else for a mixture of over almost six hundred, mixed farm animals to go.”

“To do this, we have to raise £944,000… It sounds to be an impossible sum, but with the support we’ve been receiving, and a lot of good will, we will achieve it.”

“We have now been at Manor Orchard Farm for over 20 years. In that time, we have made a lot of improvements to make life even more comfortable for our animals, creating new paddocks, purchasing stables, field shelters, a new barn, hard standing in handling areas and pig paddocks, grassland improvement, and many more.”

“Bringing in animals in need is only a part of what we do. Over the years we have investigated and reported many cases of animal cruelty and neglect, with positive results.”

“For example, not so long ago, with the help and evidence provided by our Vet, we were successful in bringing a case of gross neglect and unnecessary suffering to sheep before a Court. After receiving a complaint, we went to see the sheep, who were owned by a local man. They were weak, distressed and were alive with maggots.” “Under the supervision of our local police and with our Vets in attendance we were able to remove 12 of the worst affected animals that evening. They were days away from dying a painful, wretched death. Maggot infestation was the worst the Vet had seen in an animal that was still alive, some of the holes in their flesh were big enough to put a fist into. One ewe lay still, with her head on the floor, she looked as though she’d given up and was beyond our help. She was to be euthanised to put her out of her misery after the Vet had checked the others.”

“When she went back to her, the ewe lifted her head and looked into the face of the Vet – she was brought home, she’d shown us that she wanted help. She survived, they all survived, they stayed calm and trusting while their wounds were dealt with, the rotting fleeces taken off. Many weeks later, we had 12 bright, confident ewes, all putting flesh, AKA meat, on their bony frames. The scars in their memory had faded, although they’d carry the scars left on their bodies for life.”

“We’re known as a nation of animal lovers, how many people are able to look behind the scenes or would even want to, or turn away and say, ‘It’s nothing to do with me’?”

“The abuse of animals, especially farm animals, goes on out in the open. it’s happening now, at markets, sale yards and on farms. Question it and the answer is ‘They’re going to be eaten anyway, so why the fuss?’”

“Over the years we’ve found and taken in a wide variety of animals. Lily and Ginger, two Shetland pony foals, too young to have left their mother, sold to us in market for £9. Ginger was too stressed and weak to be able to stand, ignored by all the Welfare Officers present. They’re 22 now, still going strong.”

“Percy, the Wonder Pig. Found in a comatose state lying on the side of the M42, only a few months old. No marks on him, no ear tags, all illegal, the only place Percy could have been travelling to was a place where illegal slaughter could take place. Strangely, no one came forward to say they’d mislaid a pig?” “And so, it goes on. Ewes and lambs brought to us from farms suffering with infected limbs, cancerous growths, massive abscesses, lambs unable to walk, all left to get on with it.”

“Lambs, Pandora, Freedom, and very recently Ted, Violet and Minnie, all disabled from birth, are up and running. Blind lambs who were going to be shot are now contented and confident, enjoying the same life as all the other sheep.”

“George and Kanga, George born with the bones in his front legs not where they should have been, no future for him unless it was in the farm freezer, and Kanga, brought to us with seven other disabled lambs, she couldn’t even sit up due to the pain in all of her joints. All treatable with a suitable course of antibiotics, but they weren’t worth it. And we still hear, ‘As long as they’re humanely kept and humanely slaughtered, I feel that it’s okay to eat them’.” “Why has everyone at the Farm Animal Sanctuary become so passionate about our mission to raise the funds to keep our animals here? Generally, the people who work here and have worked here want to work with animals, an outdoor life, nothing specific.”

“Now, they’ve seen the other side of what can happen when animals are reared for meat and milk. To be present when broken animals are brought in, some too late to be saved, those who make it bring a big smile to everyone’s face. Everyone who has taken part in bringing those damaged animals back to life takes that feeling home with them, a good way to end the day.”

“I was a meat eater, I drank milk and ate cheese, I didn’t have feelings or curiosity about how it was produced.”

“By default, I became a journalist, specialising in investigations into animal abuse, smoking beagles, primates in labs, zoo animals.” “When I witnessed what was happening in our Livestock markets, I focused on that. Abuse in markets was normal behaviour, unnoticed or ignored by welfare officers present to protect them. It led to me following consignments of sheep, cattle and calves all over Europe for a National Newspaper.”

“We’re a very strong team. We have almost 600 animals in our care at the moment, please support us however you can to enable them to live out their lives at Manor Orchard Farm with us.”

“Our animals and their histories, are living proof that they are sentient beings, they are the Ambassadors to bring about change.”

“We have to stay here, no question about it.”

To help The Farm Animal Sanctuary and find out more about their work, visit thefarmanimalsanctuary.co.uk