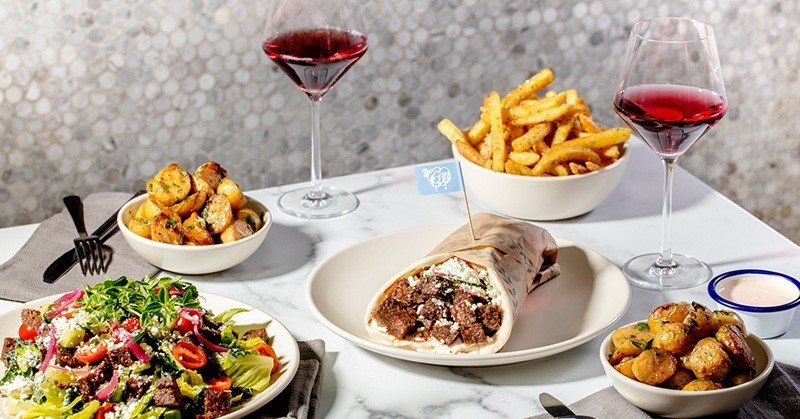 The past few years have brought us vegan chicken, vegan beef, and even vegan fish. The market continues to expand, and yesterday, fast-casual Greek chain Souvla added plant-based lamb to its menu!

The beloved San Francisco Greek chain has the vegan lamb available to add to any of their sandwiches or salads as of yesterday, Wednesday, October 20.

Souvla has exclusive rights to the brand new plant-based lamb product for six weeks, after which you can expect to see the product at more restaurants across the country. Souvla has a simple menu of sandwiches and salads that you can doctor up with your protein of choice. While they do have one vegetarian option already (roasted white sweet potato), the option of a vegan meat comes as a welcome addition to their veggie-friendly customer base. To enjoy a vegan meal, simply order a vegan lamb sandwich or salad and ask for no cheese or yogurt. Both entrees will come loaded up with veggies and pickled red onions. The plant-based lamb will also be available for nationwide shipping via Souvla’s Goldbelly Sandwich Kit.

Souvla hasn’t made any changes to their menu since they opened in 2014, making the addition of the vegan lamb a huge milestone for the restaurant and the vegan community.

The vegan lamb is made from textured pea protein, sunflower and coconut oil, beet extract, and mushroom powder, and has wowed consumers and restaurateurs (including Souvla founder Charles Bililies) in recent taste tests. The meat replacement has the gamey texture that one would expect from traditional lamb, and the flavor and even the smell of the product mirror its animal counterpart flawlessly.

Visit Souvla.com to check out the menu or place your online order, and make sure to keep up with Black Sheep Foods to see where its vegan lamb will be available next!

This Fast-Casual Restaurant is Making Taco Tuesdays Even Better