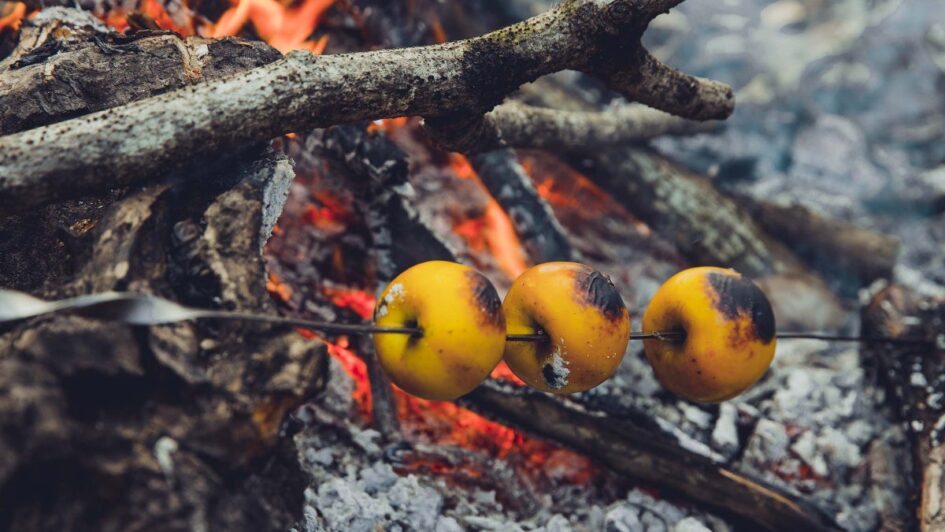 Roasting food over a campfire is the quintessential camping experience. It’s easy, gives your group an excuse to gather together, and is just plain fun. But if all you’re cooking on a stick are marshmallows and hot dogs, you’re missing out on one of the best fire-roasted dishes of all: apple pie on a stick.

Apple pie is a classic flavor for a reason. The mixture of ripe apple and warm spices (cinnamon, cardamom, and ginger) work as well on warm summer nights as on chilly fall ones. While several companies, like AlpineAire have made backpacking-friendly dehydrated versions of apple crisp, our favorite on the dish is the one you make yourself. This version takes a few shortcuts, substituting a crust and sliced fruit for a whole roasted apple, peeled and rolled in cinnamon-sugar and granola, but the result is nothing short of classic.

Tip: Can’t safely make a campfire, or don’t want to? Roast the apples over a low-to-medium camp stove instead. Pick one with a wide burner if possible.

Recipe: Apple Pie on a Stick

Combine sugar and cinnamon in a zip-top bag.

Push a stick or dowel through the apple top until the apple is secure on the stick. Place the apple two or three inches above the hot coals, and turn the apple while roasting it. As the apple cooks, the skin browns and the juice drips out. When the skin is loose, remove the apple from the fire (but leave it on the stick). Carefully peel the hot skin off. Roll the apple in the sugar-cinnamon mixture, then roast it some more over the coals, letting the mixture warm until it forms a glaze. Remove the apple from the heat, and if you want, roll it in the granola for a crust. Let it cool, then bite in!

RELATED: After Committing to #VanLife, I Learned the Secret of Eating Fresh, Vegetarian Food on the Road