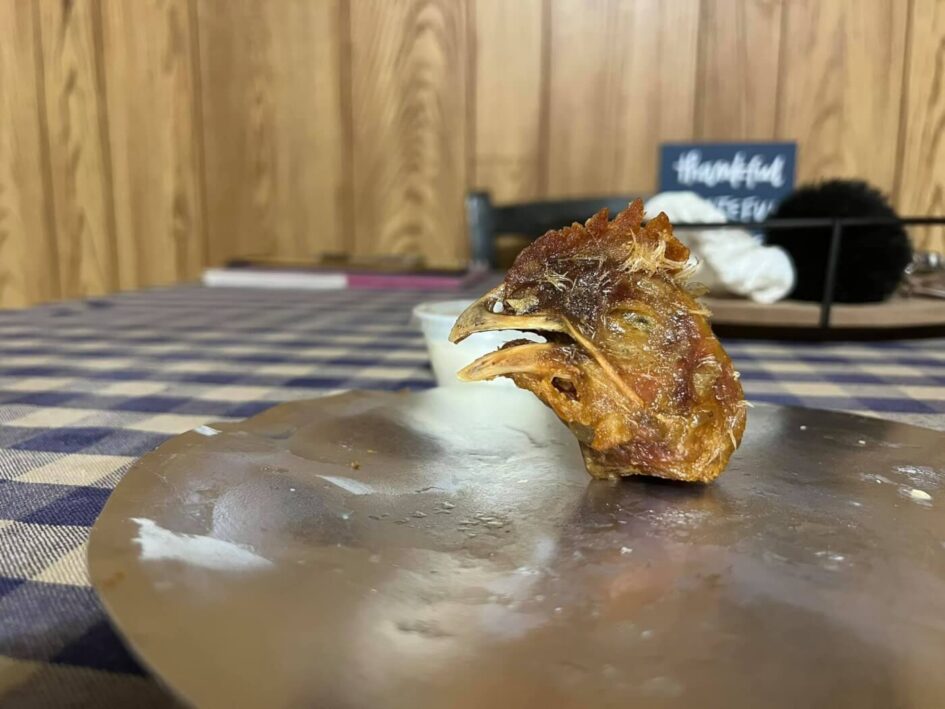 The internet went wild when, in 2016, Jared Cook—at the time, a tight end for the Green Bay Packers—made an alarming discovery after digging into his takeaway chicken wings from Buffalo Wild Wings: a fried chicken head. “Not the first time it’s happened, I remember a news story back in the 90’s when [McDonald’s] had a head in nuggets,” one Twitter user commented. Now, five years on, there’s been a similar disturbing discovery—this time, involving a Pennsylvania pizza joint. Diner Brittani Paulhamus found what appeared to be a chicken’s severed head in her takeaway chicken wings order. “I turned it and whenever I seen the beak and the eye, I threw it and I screamed,” she reportedly admitted. “So we’re in, like, disbelief at this point.”

But some folks commenting on the viral post weren’t exactly shocked: “Oh no there’s chicken in my chicken

the cognitive dissonance is real here,” one remarked.

First it was pigs’ nipples, then chickens’ noggins. Animals need us to stop being shocked when an order of parts of their dead bodies includes dead animals’ body parts.

Once they’re severed, battered, deep-fried, and coated with Buffalo sauce, it’s perhaps easy to forget that “wings” were once truly chickens’ wings—and that chickens need their wings and we don’t. These are our fellow earthlings who are capable of feeling pain, grief, motherly love, joy, anxiety, and more, just as we do. Nippled bacon, a “zombie” chicken carcass, a frozen duck head, a leaping fish corpse—these viral anecdotes serve as dramatic reminders that no one wants to be killed for food. If folks are tired of finding body parts in their food, there’s only one thing to do: Go vegan!

Chickens are inquisitive animals whose cognitive abilities are on par with those of cats, dogs, and even some primates, according to leading animal behavior scientists. But unlike the beloved animal companions who share our homes and hearts, on filthy farms, the vast majority of chickens spend their lives in total confinement—from the moment they hatch until the day they’re killed. At slaughterhouses, most birds’ throats are slit while they’re shackled and hung upside down and other birds are scalded to death. Chickens are arguably the most abused animals on the planet. Head, wing, breast, thigh—none of these should end up in your takeaway order. And the good news is that leaving chickens and other animals off your plate has never been easier: These days, there are too many vegan chicken options to count! Click below to discover a few of our favorites and to order a free vegan starter kit:

Vegan Chicken Brands No One Had to Die For

McDonalds To Launch New Vegan Option In The UK