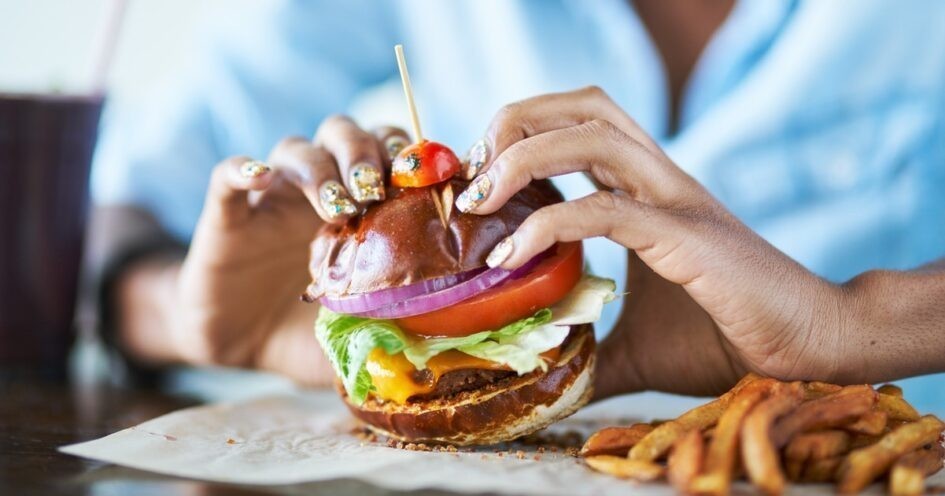 Plant-based meats have a positive impact on gut health, according to a new study published in peer-reviewed scientific journal Foods. The randomized and controlled real-world study found that consumers who eat just five plant-based meals per week instead of meat-centric dishes experience an increase in the levels of a group of bacteria that produce butyrate, a fatty acid that promotes good digestive health and lessens inflammation to protect against disease.

The study, titled “Impact of Plant-Based Meat Alternatives on the Gut Microbiota of Consumers: A Real-World Study,” followed 40 participants between the ages of 18 and 55 for four weeks with one intervention group replacing at least four meat-containing meals per week with meals cooked with plant-based meat products (the study used products from vegan brand Meatless Farm). Researchers compared the changes in the composition and functionality of gut microbiota to those in a size-matched control group that continued to eat meat, dairy, and eggs and no plant-based meat products. Stool samples were collected and the resulting data was analyzed in a compositionally aware manner using a range of bioinformatic methods. The study’s findings that plant-based meats have a positive impact on gut health are likely due to the products’ nutritional profile, specifically the fiber content which helps produce gut-friendly butyrate. The study also found a decrease in the potentially harmful Tenericutes bacteria, which indicates that plant-based offerings lead to holistic changes within the gut microbial ecosystem. At the same time, because participants in the intervention group increased their weekly fiber intake by an average of 19 grams due to the addition of plant-based meats, more than half of them reported increased gas and bloating, making this the most commonly reported adverse symptom.

“This study is ground-breaking as it’s the first to indicate a direct correlation between plant-based meat offerings and changes in gut bacteria consistent [with] better gut health outcomes,” lead researcher Miguel Toribio-Mateas of the School of Applied Sciences at London South Bank University said in a statement. “The key factor driving these changes is the nutritional value of Meatless Farm’s offerings, most importantly the high fiber content and phytonutrients found within and their role on the production of butyrate.” The goal of the study was to find out if plant-based meats such as burgers, sausages, and meatballs that are manufactured with plant-based ingredients and rich in vegetable protein, fiber, and phenolic compounds can elicit positive changes in the gut bacteria of consumers when used to substitute their animal-based product equivalents. While plant-based meat products by brands such as Beyond Meat, Impossible Foods, and Meatless Farm are classified by some consumers as “highly processed,” the process used to manufacture these plant-based products can still maintain their ingredients’ high nutrient profiles.

Some processed convenience foods include reduced amounts of ingredients of nutritional value along with high levels of unhealthy fats and refined carbohydrates, and these fiber-poor foods are known to alter the supply of nutrients to the colon and therefore promote negative changes in both the composition and metabolic activity of the gut bacteria. However, the study’s researchers argue that the potential for a plant-based meat product to promote these negative changes in the gut lies in the nutrient profiles of its individual ingredients. Because there was a lack of literature from trials on the quality of plant-based meats compared to conventional animal-based products on the microbiome of consumers, this study aimed to fill a knowledge gap in the intersection of nutrition, microbiology, and consumer behavior.

What To Eat To Heal Leaky Gut Syndrome, From Dr. Steven Gundry