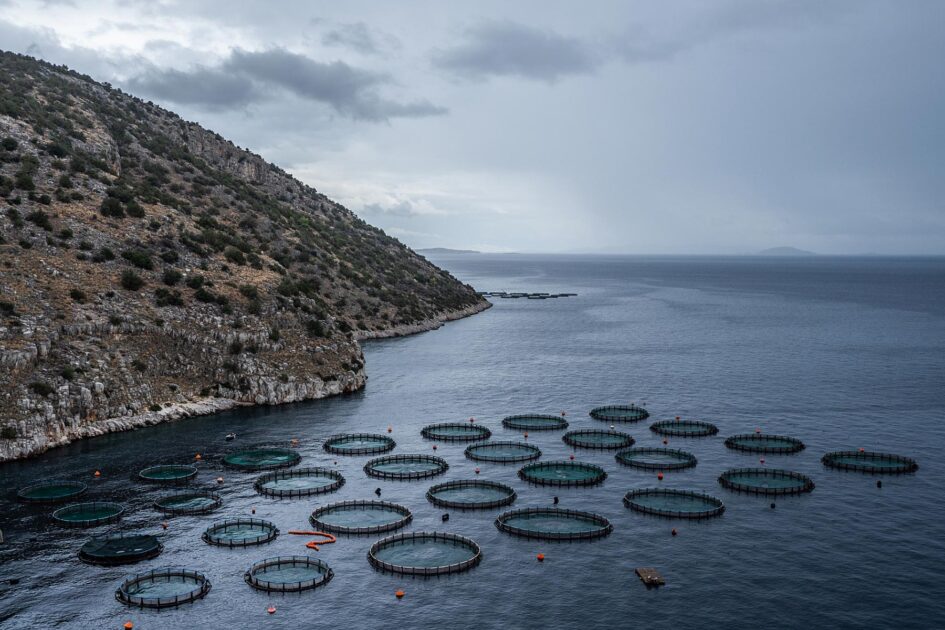 The number of intensive fish farms around the world continues to rise, with around half of all aquatic animals eaten today coming from farms. Fish farming is not a solution to overfishing the oceans, as wild fish are still caught and fed to farmed fish. And while ocean fishing is really bad for the environment, so is farming fish, with the pollution emitted damaging natural waterways and killing wild animal populations. The documentary Seaspiracy revealed the serious human, animal and environmental injustices associated with the fishing industry, and here we’ll look at why fish farming is also ethically and environmentally problematic.

What Is Fish Farming?

Fish farming is the breeding and rearing of aquatic animals in captivity for the sole purpose of killing and eating them. All fish farming is intensive, and brings with it a whole host of serious welfare and environmental problems.

Depending on the species being farmed and the resources available, different systems may be used.

Fish may be kept in cages which are immersed in a river, stream, lake, reservoir or ocean. This means all the chemicals used to try and keep the fish alive and all the waste they produce goes directly into the natural environment where it impacts wildlife. And, of course, caging animals who would naturally swim in the wide open rivers and oceans causes psychological harm that can be seen in stereotypical behaviors.

This tends to be on a smaller scale than some other methods, but it is still intensive. Fish are introduced to a water-filled ditch or pond, and are fattened up on artificial foods, which often includes soy from deforested lands.

Here, large plastic tanks are placed inside hydroponic greenhouses – where plants are grown without soil – and the waste from the fish feeds the plants.There is less environmental damage with such a system but there are serious welfare problems for the fish who are kept inside those plastic tanks.

If you thought anglers went out to catch wild fish, you would be mistaken. Fish are often purpose-bred and released into rivers, lakes and streams specifically so people can catch them. In this way, it is the same as the pheasant shooting industry in the UK, where the birds are purpose-bred and turned out to be shot, and the “canned hunting” of lions in South Africa, where big cats are bred in large enclosures just so that people can come and kill them. Different species, same exploitation.

Not all fish are reared outdoors. Like many factory farmed animals – including almost all chickens and most pigs – they are brought inside for the convenience of the farmer, and may never experience the natural environment where they belong. One of the “benefits” of this system, according to the industry, is that stocking densities can be even higher, meaning these farms can have incredibly crowded conditions.

How Are Farmed Fish Killed?

There are several methods of slaughtering fish, but all are crude and cause suffering. The industry’s terminology makes the process of slaughter sound benign but when you express each in everyday language it becomes clear what impact this has on the animals.

Just as we cannot breathe underwater, fish cannot breathe in air, and so this method allows fish to suffocate to death in the open air, a process that can take more than 15 minutes.

This simply means being frozen to death. Research has shown that this process actually elevates cortisol – the major stress hormone in fish – and the animals remain conscious for longer than some other methods.

Here, the animals are cut and bled to death without any prior stunning. According to the Food and Agriculture Organization of the United Nations, “fish may remain conscious for 15 minutes or more between the time when major blood vessels have been cut and when they lose consciousness. Eel brains may continue to process information for 13-30 minutes after being decapitated and some fish remain conscious for 20-40 minutes after evisceration” – that is, the removal of their insides.

Sometimes fish are stunned before being slaughtered, and with this method, they are beaten on their heads until they lose consciousness.

This is electrocution and may be done in or out of the water. While it is probably the least inhumane form of stunning, it is far from failsafe. If the voltage or duration of the stun is insufficient, the animal may be immobilized, but remain fully conscious.

Why Is Fish Farming Bad?

Keeping animals in intensive systems, away from their natural habitats and unable to express their natural behaviors, causes suffering. And we know that fish do feel pain. These are just a few ways in which aquatic animals suffer in farms:

For many farmed animals, handling by people induces fear, and fish are most commonly handled when being transported from breeding sites to farms or from farms to slaughter. According to the European Commission: “During transport, fish are exposed to a multitude of stressors such as density changes, handling stress, water movement, noise and vibrations, and poor water conditions. Exposure to such stressors simultaneously or in rapid succession may induce severe physiological stress… The process of transport may also lead to pain and fear in fish.”

Lack Of Space And Crowded Conditions

More animals farmed equals more profit, and so as many fish as possible are crowded into pens or cages, in the same way that chickens, geese, turkeys and other animals are intensively farmed. Overcrowding causes stress, allows disease to spread, and creates large amounts of waste that have a detrimental impact on the environment.

Certain measures are used to speed up growth so that bigger fish are produced and more money can be made. One such measure is the use of artificial lighting. It is most commonly used in the hatcheries and is intended to reduce the time the baby fish sleep. When they’re not sleeping, they’re eating, and so they grow faster and bigger. Although very little research has been done on the implications for the animals, what has been done shows that the use of lighting in salmon farming is associated with weakened bones and possible skeletal deformities.

Before subjecting the fish to stressful events – such as transporting them, separating them into different groups or slaughtering them – food may be withheld from fish, often for two to three days, but sometimes for as long as two weeks.

There are a multitude of terrible things that are done to animals on farms but deliberately blinding shrimps has to be one of the most appalling. Shrimp are not suited to being farmed and many of those kept in captivity are not able to reproduce. Farmers realized that cutting off their eyestalks, which blinds them, triggers the maturing of their ovaries, and so blinding these little animals has become the norm.

How Fish Farms Threaten The Environment?

Farming fish places a significant burden on the natural environment, through the diseases that transmit to wild populations, pollution by chemicals and waste, and the impact on local species when non-native fish escape into the wild.

Farmed animals get sick because their immune systems are compromised by the stressful conditions, and because pathogens can spread quickly in those overcrowded conditions. One example is sea lice – tiny crustaceans that eat fish alive. It’s a horrible – and horribly common – disease on farms. In Scottish salmon farms, one fifth of all deaths are due to infestation by sea lice. But as farm pens are located in wild waters, these lice – and other pathogens – can spread from the sick farmed animals and make wild animals sick, too.

Farmed fish are treated with harsh chemicals to try and keep them alive in those squalid conditions. Inevitably these also get out into wild waters and pollute them. Pollution also comes from any uneaten food and also the fish’s waste. When these get into the waterways, the nutrients they contain increase the risk of algal blooms, which deplete oxygen in the water, killing wild aquatic life and creating ‘dead zones’. Research by UNESCO’s Intergovernmental Oceanographic Commission found that the harm caused by algal blooms has risen in step with the growth of fish farming.

Fish regularly escape from farms, and when they do, they not only take their pathogens with them, but they may cause devastation to the delicate local ecosystem just by inserting themselves into it. They may prey on native species, wiping out local populations, or they may become food for another species, which then creates a boom in their numbers, and creates a knock-on effect. It’s a complex web below the waves, and fish farming disrupts it.

To ‘protect’ the fish long enough to get them to slaughter, wild animals attracted by the buffet of fish are also killed. This includes the deliberate shooting of otters, beavers, sea lions and seals, as well as aquatic birds like cormorants.

Fish farming is bad news for both captive and wild fish, and causes mayhem in the natural environment. But the good news is we do not need to eat fish, and can get all the fishy flavors we love and the nutrients we need for optimal health from plant foods. The omega-3 acids in oily fish that we are recommended to eat, for example, can be found in walnuts and elsewhere, so we can leave the fish in the wild where they belong, and help protect the environment, too.