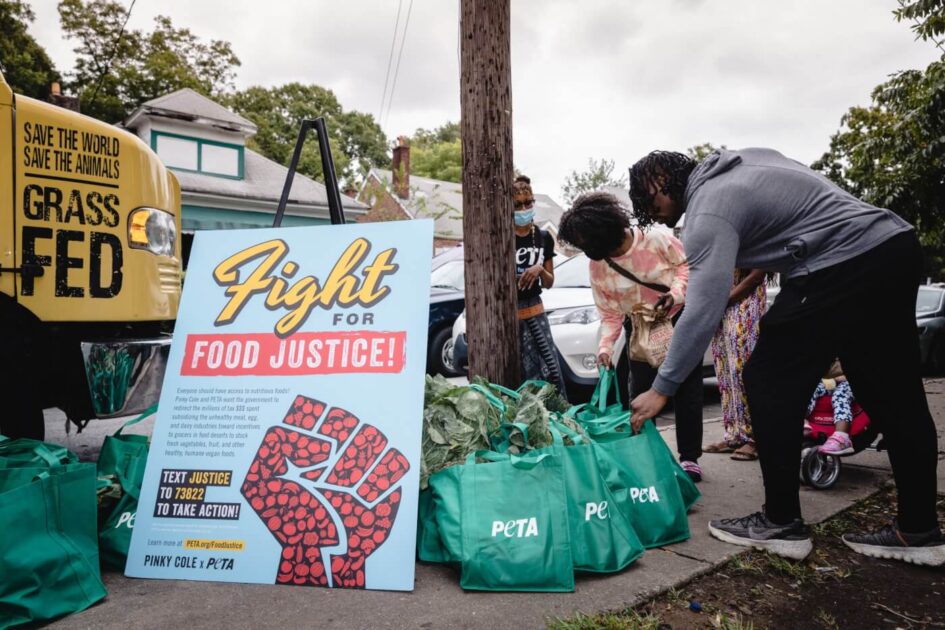 Attendees also scooped up PETA’s free vegan meal starter kits, which include a reusable green grocery bag, an easy go-vegan guide, fresh produce, and more. This is just the first of many fun events planned throughout the country, including in Baltimore, Indianapolis, Los Angeles, and other cities.

Every year, the U.S. government spends about $38 billion in tax money to subsidize the meat, egg, and dairy industries, the vast majority of which goes to big corporations, not American farmers. Only about $17 million is used to subsidize the fruit and vegetable industries—even though the federal government’s own dietary guidelines encourage people to eat more produce and fewer animal-derived products. Decades of scientific studies have repeatedly proved that choosing vegetables, grains, beans, fruits, nuts, and other vegan foods over meat, eggs, and dairy helps support a lifetime of good health. The Academy of Nutrition and Dietetics states that vegans enjoy a lower risk of death from ischemic heart disease, lower blood cholesterol levels, lower blood pressure, lower rates of hypertension and type 2 diabetes, and lower body mass indexes as well as lower overall rates of developing cancer. The proof is in the vegan pudding. Urge your local, state, and national representatives to join you in advocating for food justice. Ask them to redirect funds that support the meat, egg, and dairy industries toward incentives to grocers in food deserts to stock vegetables, fruits, and other healthy, humane vegan foods:

Clash at Carden! PETA to Counter Circus With Giveaway