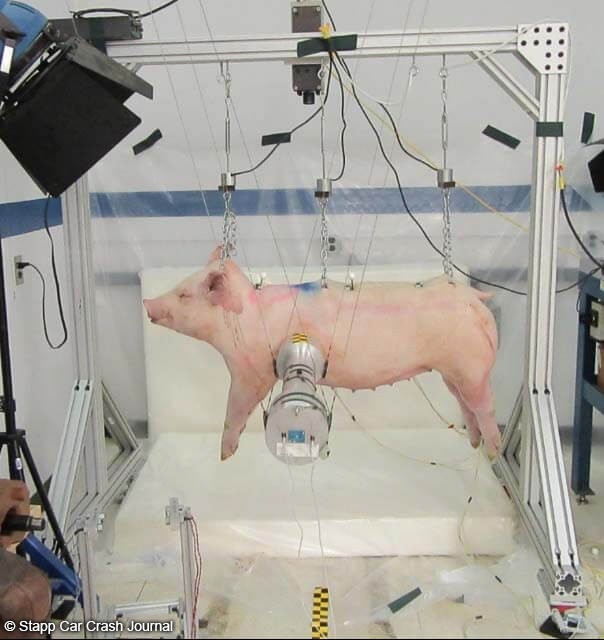 Just when PETA thought U.S. automakers had finally moved away from senselessly using animals as stand-ins for humans in crash tests, Ford Motor Company is careening out of control.

The Dearborn, Michigan, automaker recently funded a crash test that used the bodies of at least 27 pigs, even though no other car company in the U.S. has done such a thing in many years. The grisly details are found in a published study: The bodies of the pigs, who were killed just prior to being tested on, were held aloft by wires that extended through their spines as a pendulum slammed into them.

In this Ford-funded experiment, pigs were killed and their bodies subjected to injuries produced by a high-impact pendulum. Non-animal research methods using state-of-the-art manikins or human cadavers are readily available and in use by major automakers.

It’s not the first time that Ford has been on PETA’s radar. After we campaigned against the use of animals in crash tests, Ford assured us in 2009 that it “does not directly conduct or fund development of products that involve live animal testing, and is unaware of directing any such testing in the past three decades.”

This recent test appears to violate that assurance, and a Ford spokesperson refused to say whether the company was currently conducting or funding other animal tests. 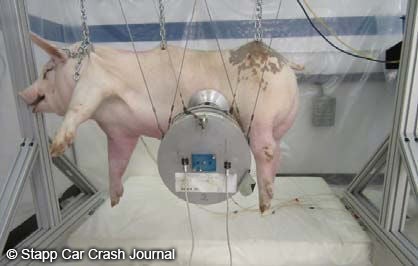 A pig’s anatomy is very different from that of humans, so the data obtained from these horrific animal experiments aren’t applicable to human car-crash victims.

It’s telling that no other U.S. carmaker is supporting this type of cruel testing on animals anymore. The world has moved on, Ford. There are crash test dummies. There are high-speed computers. Technology has made the barbaric practice of using animals in crash tests obsolete. Animals feel pain and fear and value their lives, just as humans do.