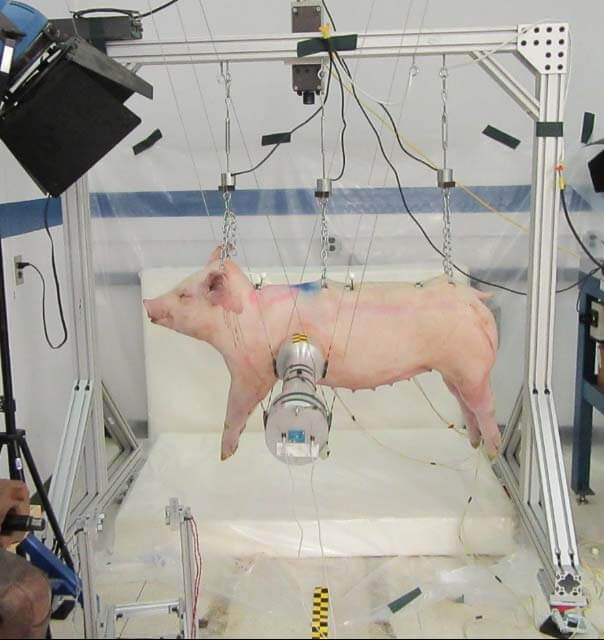 Decades after banning all crash tests on animals—following a PETA campaign—Ford has dirtied its hands once again. In a study titled “Side Impact Assessment and Comparison of Appropriate Size and Age Equivalent Porcine Surrogates to Scaled Human Side Impact Response Biofidelity Corridors,” at least 27 pigs were killed and their bodies were hung by wires through their spines and slammed by a high-impact pendulum.

The study’s authors state the following:

We would like to acknowledge and thank Ford Motor Company for its funding and support of the current research project. Funding for this study was provided by Ford Motor Company through its University Research Program. [Emphasis added.]

No other car company is known to have performed such abominably cruel tests in many, many years, and it’s time for Ford to get back in its lane and commit to helping drivers and animals by renewing its ban on car crash tests on other species.

The world has moved on to crash test dummies and high-speed computers from cruel and archaic tests on animals who feel pain and value their lives just as much as we do.

Ford assured PETA in 2009 that the company did “not directly conduct or fund development of products that involve live animal testing, and is unaware of directing any such testing in the past three decades.”

If Ford is going back on that commitment now, PETA will ensure that the public is fully aware so that car buyers can make informed decisions about which automakers to support and which to drop.