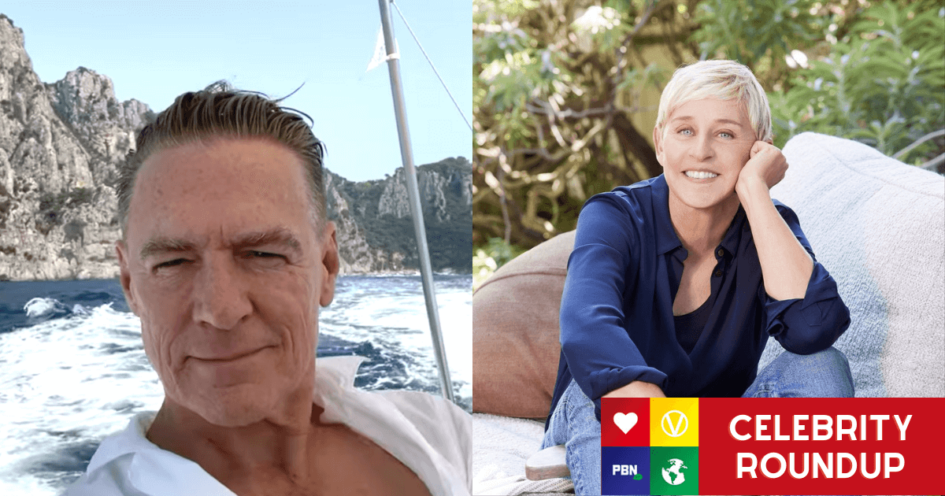 Big names have been making waves in the vegan scene this week. Ellen DeGeneres dips her toe into vegan beauty, Bryan Adams explores the dairy-free scene, and more.

Ellen DeGeneres has announced she is releasing a vegan skincare line. The range, called Kind Science, is mostly under wraps for now, with more details becoming available on October 26 when it launches.

“There’s something that I’m very excited about. I have been working on this for three years and I’m excited to share it with you today,” the talk show host said on her program.

DeGeneres describes the line as ‘age-positive skincare that actually works’. She reveals that she has been using the products for three years, with her friends and family trying it out too. The results have been ‘through the roof’, the 63-year-old entertainer said.

The name ‘Kind Science’ stems from the range’s kindness to skin, animals, the planet, and wallets, DeGeneres adds. The range does not test on animals and is Leaping Bunny-certified.

“Kind Science isn’t about anti-aging because aging is a good thing… I want to keep laughing, just with fewer laugh lines and wrinkles,” she said on Instagram.

Adams, who has been vegan since 1989, said he hopes the collaboration will help inspire conscious consumerism. Specifically, by choosing products that benefit health, animal welfare, and the environment.

“Fostering responsible eating habits, such as choosing plant-based dairy alternatives, is something that we can all do to help lessen animal cruelty and help our environment,” the entertainer said in a statement.

“I’m excited to be invited to be a founding member of bettermoo(d) for those reasons.”

Bettermoo(d)’s first product is a ‘fully foamable’ dairy-free milk, called Moodrink. The beverage is free from BPAs, carrageenan, and gluten.

Moodrink is set to arrive in Canada in winter 2021/2022. Flavors like vanilla, matcha, and chai will also be rolled out. Then, the company will introduce new dairy alternatives over the next 12 to 18 months.

“Being plant-based isn’t just a trend – it’s about making better choices,” said Nima Bahrami, CEO of bettermoo(d). “By creating great-tasting alternative dairy products, made from sustainably-sourced quality ingredients, we will make it easier for consumers to make these better choices.”

The supplement, called DTF, was made to support women’s sexual desire, arousal, and mood.

On her Instagram, the Academy Award-winner wrote: “Everyday stress and anxiety, hormonal changes, exhaustion, age… These can impact our libido and sexual health. So yes, we (with our science and research team) created a supplement that REALLY helps and, yes, we called it DTF.”

The Goop website notes, “It’s not just about sex: It’s about supporting our pursuit of more pleasure, more often.” Goop added that the DTF label ‘can be a joke we share’.

Fish and chips are a staple in a lot of British families’ diets. In fact, 380 million portions are sold every year in the UK.

“It suddenly became obvious what we needed to do,” said Winters, who is vegan himself. He added that the company’s mission is to ‘take on’ the fish and chip shop industry.