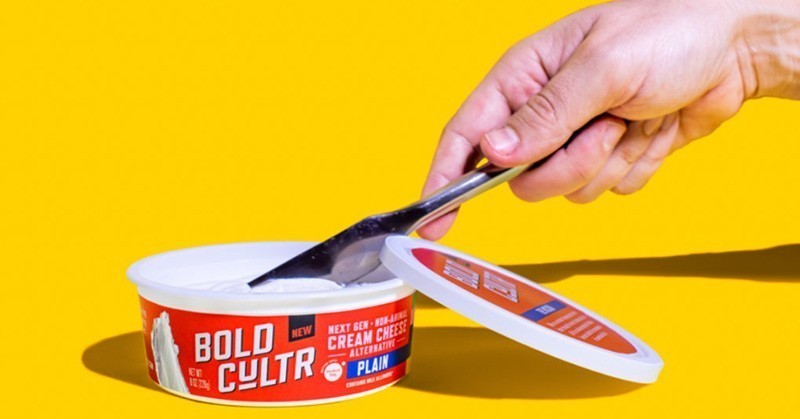 “Animal-free” is the new trend these days, with countless companies turning to scientific technology to create identical replicas of animal products without the animal! General Mills is the latest company to release an animal-free product with the launch of their vegan cream cheese made with animal-free whey protein.

The new vegan cream cheese is being released under the new brand Bold Cultr. The first and only product, for now, is a plain flavor cream cheese made with milk-identical proteins that are created through precision fermentation. The non-animal whey protein comes from Perfect Day, a food technology company that’s leading the foray into animal-free proteins.

The cream cheese is also made with pea protein, palm oil, and various cultures. Bold Cultr has plans to release two additional flavors of the cream cheese, as well as animal-free slices and shreds.

The cream cheese can currently be found on Bold Cultr’s online store, as well as in select Hy-Vee locations in Minnesota. Beginning in January, popular bagel shop Rise Bagel Co. in Minneapolis will also be serving the product. Look for a nationwide expansion soon, after the brand gathers early consumer feedback.

Perfect Day—the company behind the non-animal whey protein used in Bold Cultr—uses a process called precision fermentation, in which microorganisms are programmed to produce specific proteins. These proteins are then combined with microflora to produce a genetically identical equivalent to dairy … without ever using an animal!

Bold Cultr then utilizes this protein, along with traditional dairy cheese-making methods, to blend and ferment the product into flavors and textures you know and love in a cream cheese.

While these new technologies can be confusing, it does make it easier than ever for anyone to eat animal-free (especially those who love cheese!). Visit PerfectDay.com for more information on how the animal-free dairy is produced, and check out some of the other companies that have started making animal-free alternatives to your favorite products, like Brave Robot (who also uses Perfect Day’s animal-free dairy) and The EVERY Company, whose animal-free egg white protein is now being used in a new smoothie at Pressed.