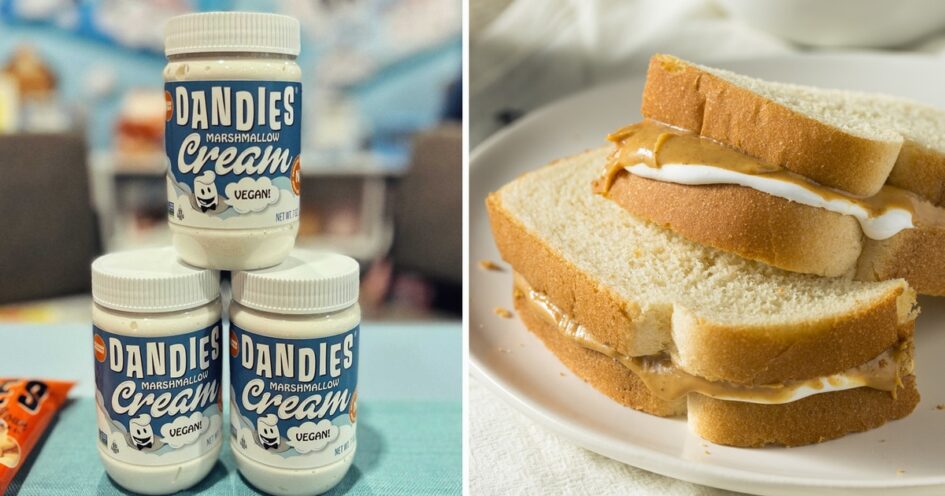 Created to satisfy longtime customer demand for spreadable marshmallow fluff, Dandies’ new vegan marshmallow cream is free from the top eight allergens, including soy, and is made with certified vegan sugar. Unlike other puffy marshmallow products under the Dandies brand, CVF’s newest addition to the line is also carrageenan-free and represents its first offshoot from its core line of solid vegan marshmallows.

“This has been a product I’ve been excited to see come to fruition for a long time and a product I know our customers have been wanting to see,” CVF Founder Dan Ziegler told VegNews. “It’s a first-of-its-kind product in the vegan market.”

CVF also showcased new Dandies maple-flavored mini marshmallows at the convention that are set to hit stores in January 2022.

Ziegler and Ryan Howard founded CVF in 2001, initially launching the brand with Temptation Vegan Frozen Dessert and Tease Vegan Cheese. In 2010, CVF first launched Dandies in stores as the first vegan marshmallow on the market. Since then, CVF has innovated Dandies to include seasonal flavors such as peppermint, pumpkin, and upcoming maple. Propelled by the success of Dandies and the explosion of the plant-based market, CVD has grown 40 times in size over the past 10 years. Though the brand is sold primarily in the US and Canada, late last year Dandies expanded overseas at all ASDA stores in the United Kingdom. Why most marshmallows are not vegan

Most commercial marshmallows are made with gelatin, rendering them neither vegan nor vegetarian. Gelatin is typically derived from the boiled connective tissue of pig or cow bones, ligaments, and tendons. And while some marshmallow fluff does not contain gelatin, its fluffy texture is typically derived from egg whites, rendering it not vegan, as well.

In addition to CVF’s Dandies, there are a few other brands making vegan marshmallows, including Yummallo which launched its marshmallows—made from sugar, corn starch, rice protein, and vanilla—at Walmart stores in April. Trader Joe’s also offers private-labeled vegan marshmallows in its stores and ice cream brand Ben & Jerry’s created a new marshmallow swirl for a vegan version of its iconic Phish Food flavor it launched earlier this year.

Sarah McLaughlin is the New Products Editor at VegNews who is always on the search for the newest innovations in plant-based food.