Glastonbury Vegan Taste Trail – What To Eat & Where To Go 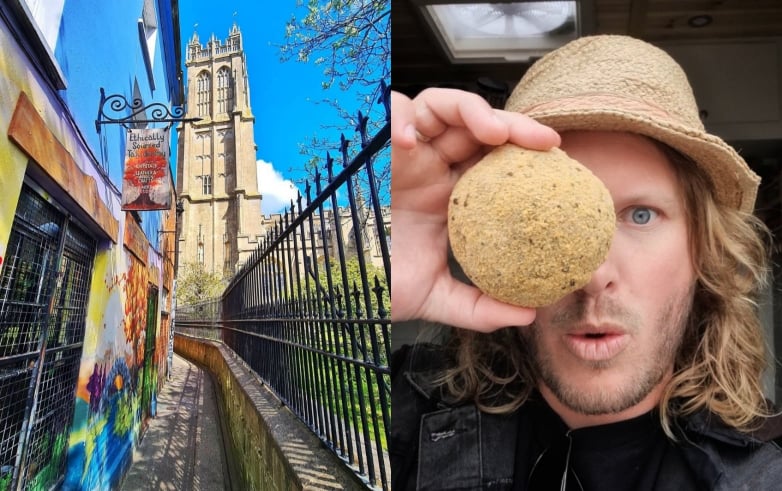 Glastonbury is a secret haven for witches, wizards, and vegans!  Let us take you on a plant-based taste trail of this wonderful town

The following list of vegan-friendly places to visit when in  Glastonbury,  is by no means fully comprehensive! Glastonbury is super friendly to vegans, but the trail we have provided definitely shows off the best plant-based food that is on offer.

This is Glastonbury’s only 100% vegan eatery, which makes this a must-visit place on your Glasto itinerary.  But there are many other reasons to visit, the main one being the delicious vegan comfort/junk food, and their incredible bakes.

On arrival at  Pyramid, they were baking up some Giant Vegan Scotch Eggs, and we mean huge! It was such a treat to eat it warm out of the oven too. Before we visited Glasto, we were advised by the local vegans to try Pyramid’s vegan Vish & Chips, which we did and they were right to get us to do it. The vegan ‘fish’ is so similar to actual fish that a local walked past at the time and popped her head into the cafe to tell us how realistic it is, and she wasn’t even vegan herself. Matt Sparrey, the owner of the Vegan Pyramid, told us that they ‘like to experiment with the menu and change it up often‘, namely with the different bakes that they do, which are baked by his lovely wife and talented cook.

Other items we sampled whilst we were there were the Cheeze & Bacon Turnover, Spinach & Mushroom Quiche, Savoury & Sweet Tarts, Cheeze & Onion Potato Roll, Samosas, Sausage Rolls, Cheezecakes, Sweet Crumbles, Brownies, Biscoff Cakes, and so much more.

If that wasn’t enough, Pyramid uses only compostable packaging, and actively promotes using local, fairtrade, and organic products in their foods. And it’s all super friendly for different dietary requirements

Not just tasty, homemade food, but a gorgeous setting too. The Rainbow’s End is on the main high street and you could easily not know it was there. It has a tiny door front but opens up into the most beautiful fairytale-like garden. This place has been here for decades, and it’s one of  Glastonbury’s longest established veggie cafes. The owners have clearly kept the standard up as locals keep returning for their lunchtime meals.

Apparently, the menu changes theme quite often, but Egyptian cuisine regularly resides here as it’s linked into the heritage of The Rainbow’s End owners.

The cafe is set-up school dinner style, where you queue and the server (who was vegan, and grandson to the owners) loads up your plate with what’s on offer that day. All of the food looked homemade and wholefoody with plenty of legumes and salad. We ordered: Egyptian Samosas (a first for us); Egyptian Street food Salad with legumes, rice, and pasta; a Tofu Tart which tasted like Mousakka; and an Earl Grey cake.

The quaint garden and the incredibly tasty food make up for the fact that it’s a tad on the pricey side, I guess you get what you pay for. But we would certainly recommend this place to anyone for a memorable Glastonbury  experience.

Tofu Scramble can  be hit or miss, but this is a definitely a hit! This place was recommended to us by a vegan whilst we were in Glastonbury. You are going to have to walk to the bottom of the town for this, but it’s definitely worth the short walk. This building used to be a police station but feels like you are sitting in a church garden when you are outside.

It’s not a vegan or vegetarian  cafe, but super vegan-friendly. We sat underneath a large oak tree and drank coffee whilst waiting for the brunch to arrive.

The scrambled tofu is leaning more towards a scrambled egg than it is a tofu dish – which we love! It has to be one of the best vegan dishes in Glastonbury, and a great place to go if you have non-vegan company.

Based closer to the top of the town on the high street is Earthfare, an eco-conscious supermarket with a fantastic deli.

What was once a  Woolworth’s building is now full of eco-friendly cosmetics, homeware, and lots of delicious vegan foods.

Right at the back of the store is a little deli where they bake up fresh pastries (not all vegan, but most) and have incredible coffee to take away.

We bought vegan croissants & lattes and sat on the high street watching the quirkiness of Glastonbury walk past in front of us.

Run by a lovely former actor/presenter, The Green Room is tucked down an alleyway which can be easily missed if you weren’t looking for it.

We included this place on the list because if you are going to buy wine from anywhere in Glastonbury, make sure you get it from here.

All wines are vegan and organic (or as close to organic without being 100% certified). We got a bottle of Sauvignon from here that was one of the most delicious we have ever tried.

Probably one of the most vegan-friendly bakery chains you will come across. Burns The Bread is on the high street again and is well worth a visit. We had vegan Eccles cakes and sausage rolls, but the items that stood out were the Glastonbury pasty and the Iced Buns. No joke, it was the first time we have had an authentic iced bun in eight years – pure nostalgia!

The Glastonbury Pasty is very much like a Cornish Pasty,  with soya mince, veg, and delicious pastry. Iced Buns from Burns The Bread

You don’t have to drive far around Somerset before you come across an orchard, so we were on the hunt for apple-based foods. Luckily the very vegan-friendly Hundred Monkeys Cafe had some apple cake on offer the day we were there – and it was delicious. We loved sitting in their lovely and intimate garden, drinking tea, eating cake and talking to the locals.

Cafe Sol should be on  every Glasto-goers list. A veggie/vegan cafe that is based around their beautiful little garden.

In all honesty, we wanted to come here just to sit amongst the quirky characters playing music and having fun, but the food was also really good. We hope you enjoyed our taste trail of Glastonbury. As we revisit this town, we will update this list with all the new things we find.

Are Vegan Eggs Healthy? What Do They Taste Like?