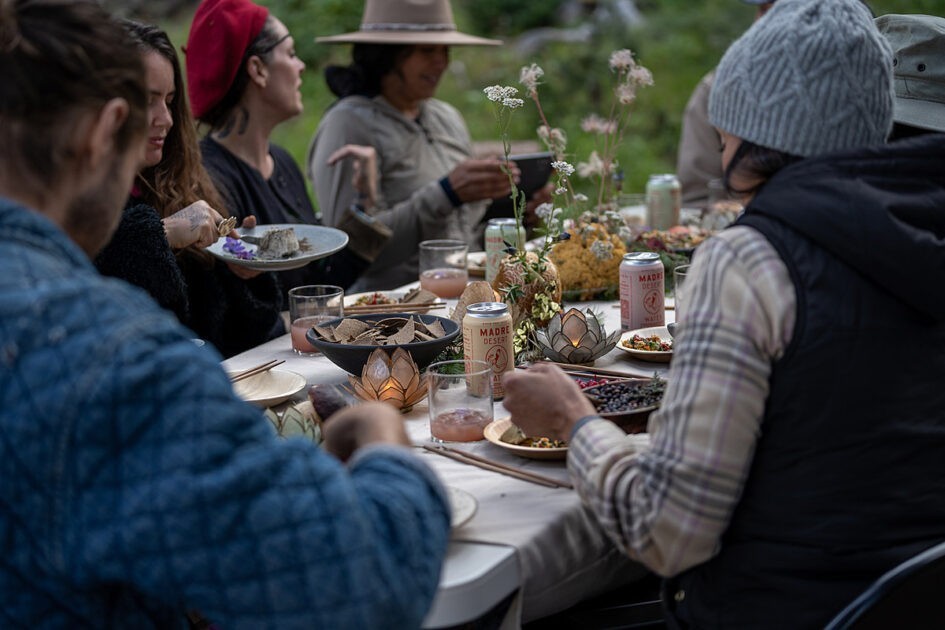 The art or sport of foraging has taken on a new urgency, as people want to know where their food comes from, and is suddenly popular in states from Maine to California. That’s why I recently found myself on a mountainside forest in Telluride, Colorado, competing to find the bounty of mushrooms, seeds, berries, and other edible plants that were hidden in plain sight.

Telluride has long been a notable hotspot for mushroom-obsessed foragers and epicurean wildcrafters. Impassioned locals keep their pruning knives handy, refusing to divulge the exact coordinates of their favored alpine destinations, as they await the first pop of their chanterelles or porcini to show up.

I was lucky to join a group of experienced foragers, led by vegan chef and author Jess Starwood, on a glamping and cook-out adventure in the Uncompahgre National Forest at an altitude of 11,400 feet. Once we adjusted to the light-headed feeling that comes with higher elevation (and the awe-inspiring backdrop of snow-ringed mountains), we embarked on a gentle hike, baskets in hand, in search of edible, high-profile, rare mushrooms.

Our first discovery was a cluster of beaming spotted, orange-capped mushrooms called fly agarics that look like the iconic fairytale mushrooms from Allice in Wonderland, but which I learned are technically Amanita muscaria. Though they look enticing, they are some of the most dangerous kind – so it’s best to admire them from afar. But Jess quickly set the record straight on the subject of “poisonous” mushrooms.

“I write about this in my book—[the muscaria] has long been erroneously considered a poisonous mushroom, but,” she adds, “we all ate it without consequence. When properly prepared, it is an edible and medicinal mushroom. Yes, if you ate large quantities of this raw mushroom, it would cause hallucinations and psychotropic effects. The term “poisonous” alludes to the possibility of death from eating the mushroom and that is not true and incredibly rare.”

So while they are not actually killers in the sense of a poisonous snake, these mushrooms are indeed known for their hallucinogenic properties, with the main psychoactive active ingredients being the neurotoxins ibotenic acid and muscimol. When Lewis Carroll’s Alice ate pieces of this “fairy tale mushroom” she had visions of following the rabbit down his rabbit hole, getting smaller, then bigger, meeting the Queen, and having fantastical hallucinations.

“They don’t have much flavor when properly cooked, Starwood told us, but they do have some medicinal properties as a topical painkiller. And while “technically you can eat them,” she added: “I wouldn’t recommend it for beginners.”

Searching for mushrooms, seeds, and berries

Instead, Starwood steered us toward a patch of Rocky Mountain porcini mushrooms (aka Boletus rubriceps). This superstar mushroom pairs well with other plants and natural spices and is revered worldwide as a  culinary delight.

The classically shaped porcini is high in nutritional value, containing notable amounts of B vitamins and amino acids. Though some enthusiasts gravitate to the larger ones, Starwood explained that when it comes to boletes, bigger is not necessarily better. “You want to go for the smaller buttons,” she said. “They’re less likely to be a host to insects.”

After a short trek to a shaded area, we found a patch of Hawk’s Wing mushrooms (Sarcodon imbricatus), wing-patterned fungi with tons of flavor and antibacterial properties. Hawk’s Wing is popular in the coniferous woods of Colorado and other wooded regions, easy to recognize, and has no known poisonous look-alikes.

Surrounding these prized fungi were large patches of thimble-sized, wild strawberries, as well as wild onions, harebell flowers,  and dandelion shoots, all of which we placed in our baskets. Since it was my first time foraging for mushrooms, I made sure to check with veteran mycologists before unearthing any or tasting varieties. I strongly advise any novice foragers out there to do the same.

The hike ended with the discovery of a cache of beautifully formed chanterelles (Cantharellus cibarius), spotted at the edge of the meadow. Though the color of these fungi varies from white, light yellow to dull orange, they can be distinguished by the ridges beneath the cap that run the length of the stem.

This ground-dwelling plant, which is rich in Vitamin D, works in both sweet and savory dishes. With a fruity yet graceful aroma, these mushrooms are believed to have antioxidative properties. Starwood cautioned us to be vigilant about look-alikes, including the toxic jack o’ lantern mushroom, which can often be mistaken for a chanterelle.

Back at the campsite, we washed and prepped our take, using foraging knives and small paintbrushes to remove dirt and debris, before soaking the plants in a cold water bath to preserve them.

Foraging reminds you of the work that goes into your food

“When sourcing our food, we should consider where it came from and what resources were used to get it into your hands,” says Starwood. “With commercial food production, most of our foods are grown in distant locations on large swaths of lands that have been stripped of all biodiversity, shipped, stored and packaged in ways that deplete our waning natural resources.”

Starwood has long held a fascination with finding food in the natural world and eating it. “As a kid, I was always interested in nature and curious about what plants were edible if I were to ever run away from home to live in the wild. However, it was during my deep investigation of holistic health and food that led me to research the most natural and unadulterated diet for humans with the least amount of impact on the environment.”

How to learn to live off the land

Our chef improvised an outdoor grilling station, while we strung some lights and set the table with a bouquet of hand-picked wildflowers, including purple harebells and dandelions. Soon we were seated and happily out of the sun, under the shade of a Douglas fir, to start our foraged feast that included vegan delicacies Starwood had created in advance.

For appetizers, she had made fermented yucca blossoms topped with pickled thistle buds, smoked porcini, and cashew nut cheese, and an elixir made from osha (also known as bear root and good to fight off colds) and elderberry syrup. The second course featured the mushrooms we had just plucked from the ground – including a tasting of Amanita muscaria, Rocky Mountain porcini, Hawk’s Wing with koji soy sauce, and delicate chanterelles. (I waited for the effects of this fairy tale mushroom to kick in but nothing happened.)

The third course, which was paired with Madre’s refreshing Desert Water mezcal – the company that had arranged the entire trip – centered a sweet acorn crisp with bay nut cream, drizzled with elderberry syrup and topped with wild strawberries, blueberries, and gooseberries, and then garnished with fried strawberry leaves.

Foraging lets us connect to the natural world

“Foraging allows people to be intimate with their food,” said Starwood, who made the leap from vegetarianism to veganism after the birth of her first child, and later earned a Master’s degree in herbal medicine.

Five years ago, she packed up her Subaru and traveled throughout the western states, meeting with plant-based communities and discovering foraging practices in several regions. Now Starwood leads wild food excursions across the Western US as well as internationally.

“You can feel good about foraging and mixing in other ingredients – as long as you know where your food comes from,” Starwood explains. “When we outsource our food, there’s a disconnect. Foraging allows for an ongoing conversation that connects us to our food.”

Here is what you need to get started

A foraging knife with attached brush

Investing in a good foraging knife may be useful. Some have small attached brushes, which are helpful for cleaning debris from plants and vegetables in the field.

Get one large enough to keep items separate. You may want to wear a light backpack, with room for hydration, sunscreen, and an extra layer (to take on when the sun heats up or put on as the light wanes), but a basket ensures you won’t crush your bounty.

This is no joke at elevation and in the summer sun, where sun protection is even more important. You can get burned much faster in the mountains than at the beach.

When you set out on a mountainside, your ankles and arches need more support, and to enjoy all the striking views, you work for it. Plus every uphill slope or trail is accompanied by steep downhills. Invest in sturdy hiking boots to save your feet and joints.

Plenty of water and iodine pills

Sounds obvious. Bring twice as much as you think you need or iodine pills to help you cleanse a brook and drink from mountains streams. Animals live there too and your water source may be their bathroom.

A book about foraging mushrooms

Nature is tricky. Know what you’re doing. If you don’t have a guide, then read Jess Starwood’s book, Mushroom Wonderland (2020)

When is the best time of year to go foraging

The best time to go foraging is fall but there is always something to forage, throughout the year, depending on the region, and it is a good exercise of creativity, Some regions have excellent foraging conditions for most of the year, where others are more seasonal. Winter is a challenging time, especially in northern regions but even then a creative forager can be collecting conifer needles, rosehips, acorns and various roots and so much more.

Make a recipe from Starwood’s book

If you can’t have the luxury of Jess cooking your mushrooms at the end of a long day of foraging, then at least make this recipe to enjoy your haul. But of course, if spending days in nature with a botanist and chef is your idea of fun, then check out her upcoming adventure to Baja, California, which you can still book for this coming November.

Combine the steamed mushrooms with the marinade and mix well, ensuring that all mushrooms are coated with the flavors. Allow the mushrooms to marinate for up to a few hours or overnight in the refrigerator.