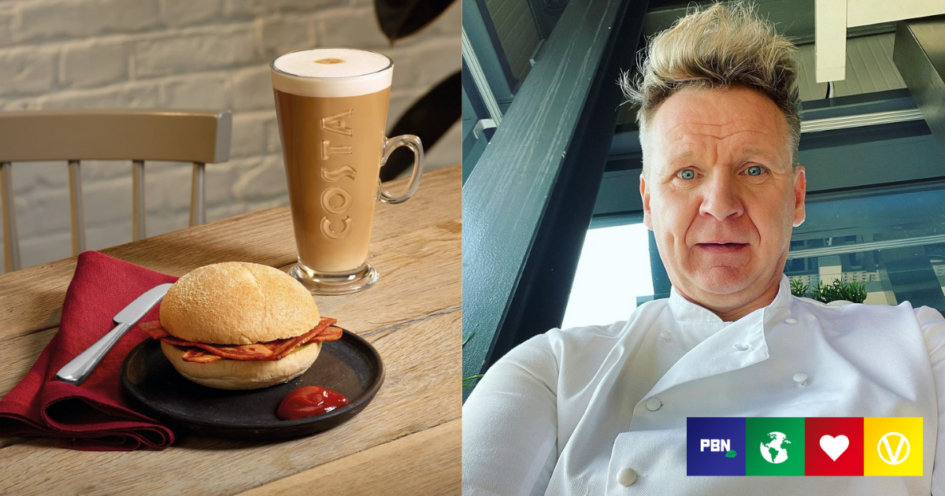 A look-alike of the famous TV chef Gordon Ramsay has been hired by Costa Coffee to promote its new vegan bacon roll.

Impersonator Martin Jordan is part of the campaign and features in a video on the coffee giant’s TikTok account.

Across two videos, Jordon claims one of his ‘all-time favorites’ is the Vegan Bac’n Bap. Moreover, the campaign states ‘proud to be fake’.

‘I’m no expert but this is pretty f*cking good’, Jordon claims in the post.

It comes after Ramsay’s long history of criticizing vegans. Despite this, he was named a spokesperson for vegan milk brand Silk this summer.

It’s made with Naked Bacon Without The Oink! by Finnebrogue and on offer for £3. The brand claims: “‘There really is nothing like the taste and smell of proper bacon. But these delicious rashers are made without the oink.”

Earlier this year, Gordon Ramsay was criticized for a viral TikTok video in a Costa drive-thru.

In it, he returns the bacon in a bacon bap and laughs with a member of staff about his infamous ‘idiot sandwich’ joke.

Additionally, he lambasts the company for microwaving the bacon rather than grilling it. ‘Tell Mr. Costa to get a grill for Christmas…you’ve got to grill it’, he adds.

The video garnered more than a million views but not without the 54-year-old being branded a ‘snob’ on social media.