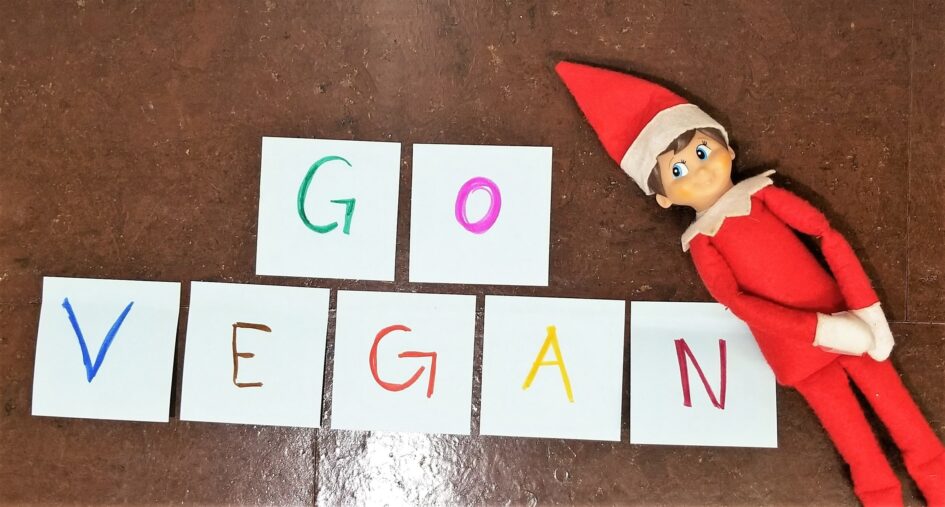 To help the family get into the Christmas spirit (and impose an ever-so-mild yet constant threat), many parents invite an elf to sit on a shelf in their home and observe their little ones. The kids actually love it when the elves come to visit, and it’s great for the elves, too—they get a break from making toys, and Santa gets a break from cooking all their meals! (He recently had to come up with a lot of new recipes when many of his employees decided to go vegan after watching The Game Changers on Netflix.)

Not to worry—vegan elves still love spreading Christmas joy. Just don’t be surprised if your elf’s slightly changed priorities inspire him to try to add a little animal-friendly flair to the festivities this year. Here are some ways you can convince your kids that this compassionate visitor is not only keeping his eyes on them but also encouraging them to take action for animals:

1. You may catch him attempting to fill the dog’s water bowl, but the kids will probably need to lend a hand—and the elf will be watching to make sure they do! 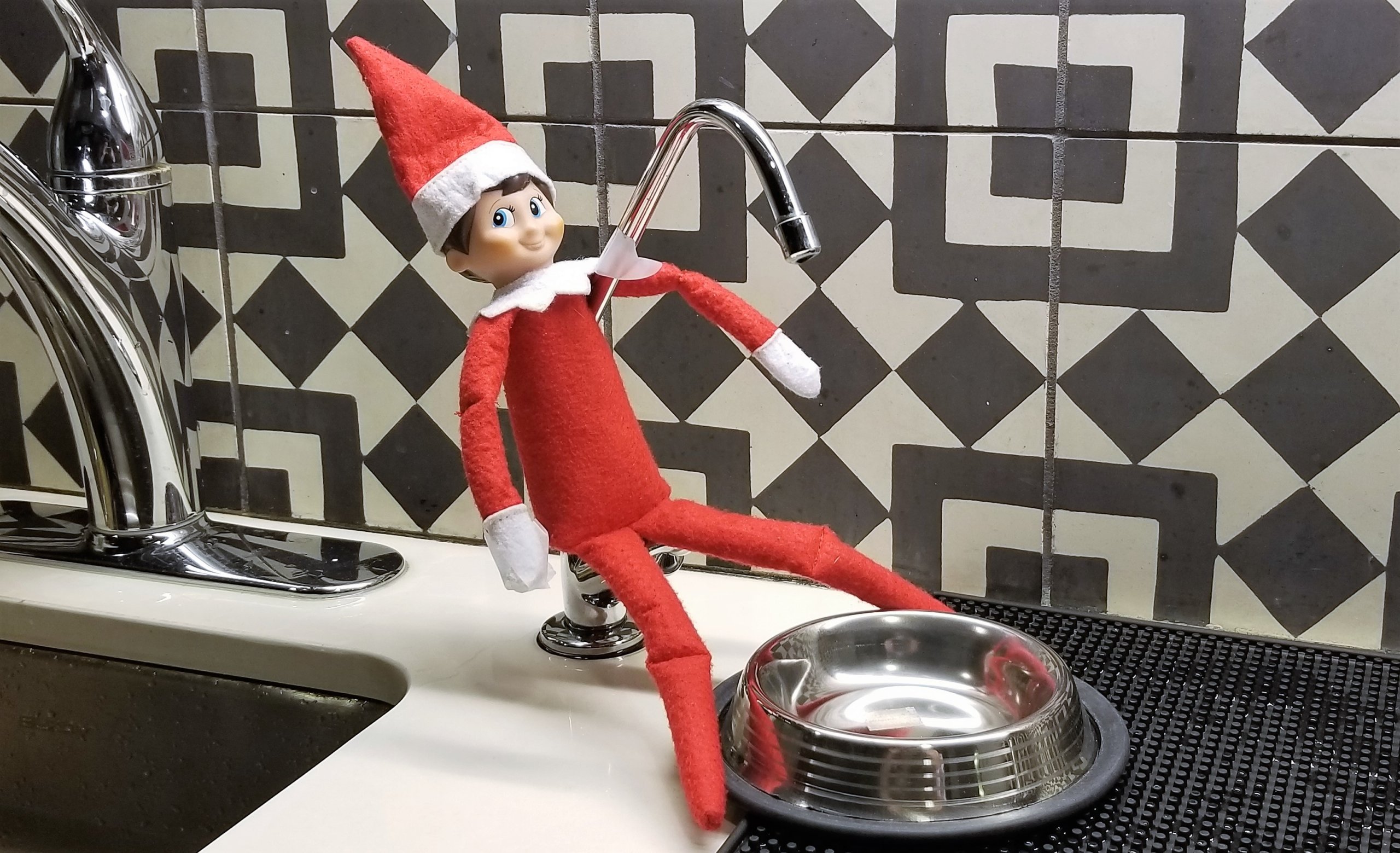 2. You’ll wake up to find him snuggling in some used blankets in order to encourage the kids to collect even more of them to donate to an open-admission animal shelter.

3. He’ll get started on a letter to Santa (who may be residing at SeaWorld this winter), asking him to free the orcas. The kids will need to help by writing the rest of it and mailing it. 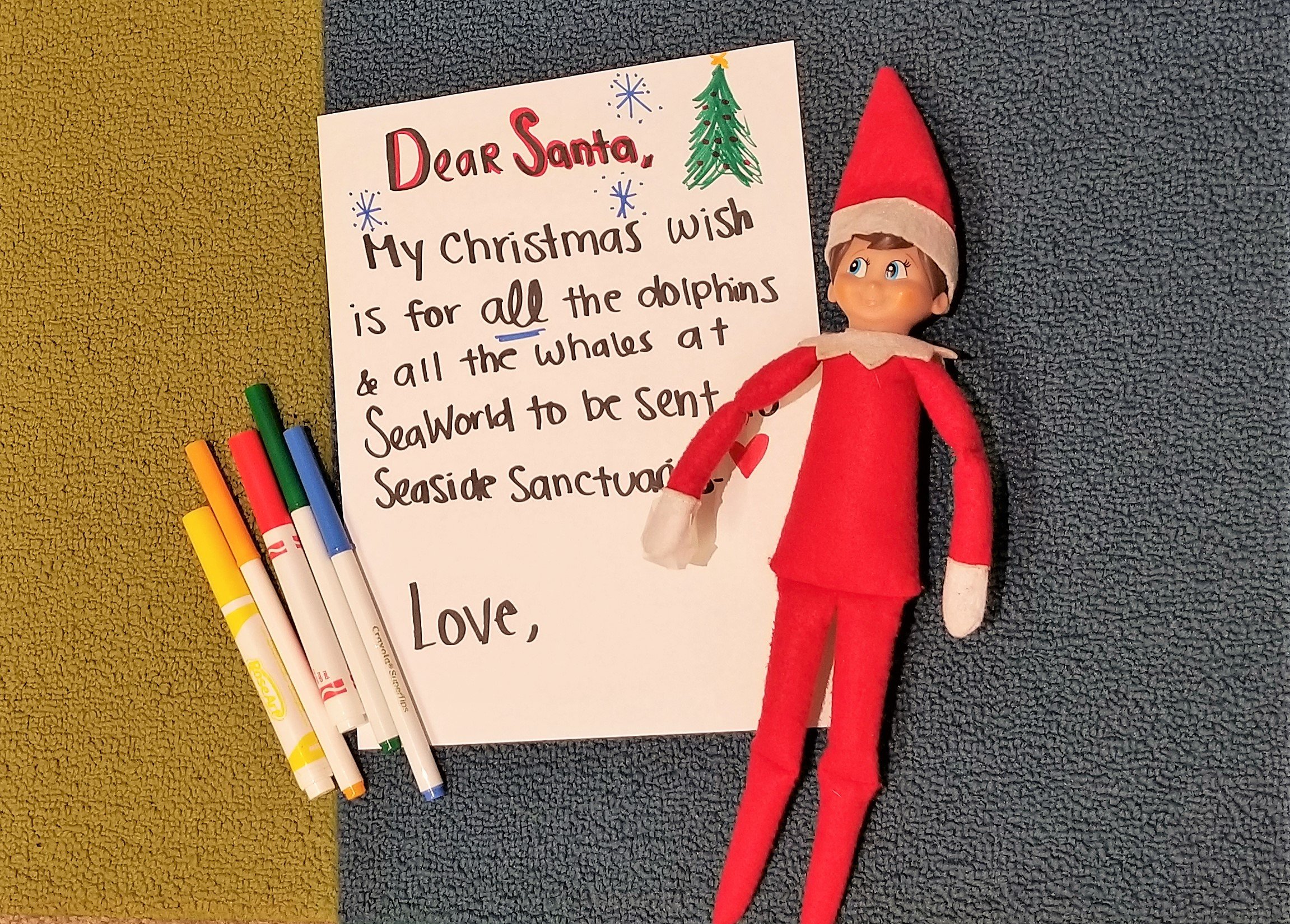 4. He’ll probably fill up a box of your family’s old leather, wool, down, and fur clothing and perch on top of it with a matchbox in his hand. You can calm him down by explaining that instead of burning the garments, you can donate them to your local homeless shelter so that they can be put to good use.

5. Around bedtime, you might find him sitting in a rocking chair with Santa’s First Vegan Christmas open to the first page. He’ll wait there patiently until you read it to everyone, but be warned: If you don’t use a “Santa voice,” he’ll make you start over. 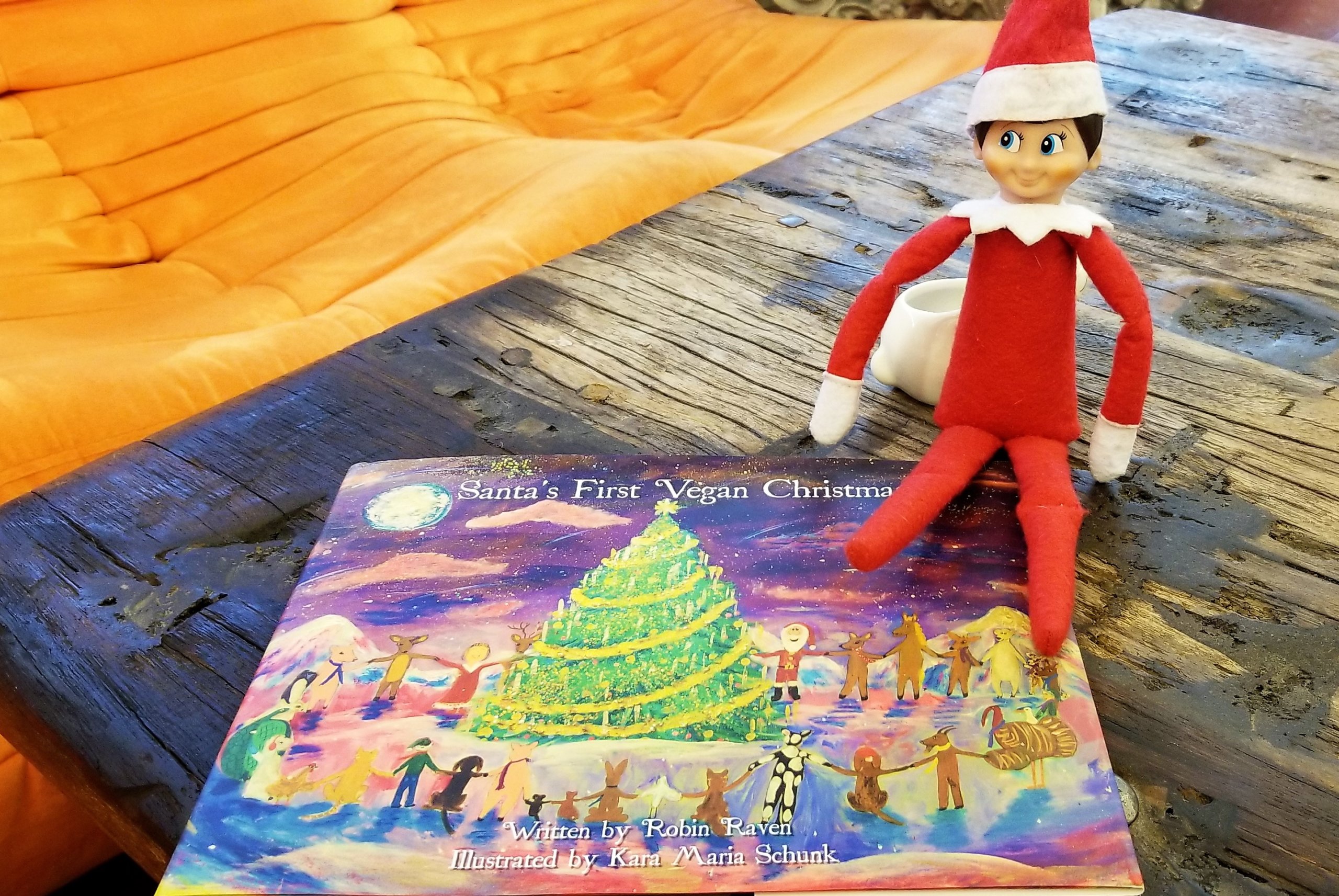 6. There’s no need to fret if you wake up to find that he’s made a snow sugar angel on the counter—he clearly just needs help making vegan cookies for Santa. Don’t forget to serve them with vegan milk—as if he would let you forget. ?

7. You may find him peeking out of a large trash bag that’s hanging on the door knob, as if to say, “Let’s go pick up some litter around the neighborhood together.” 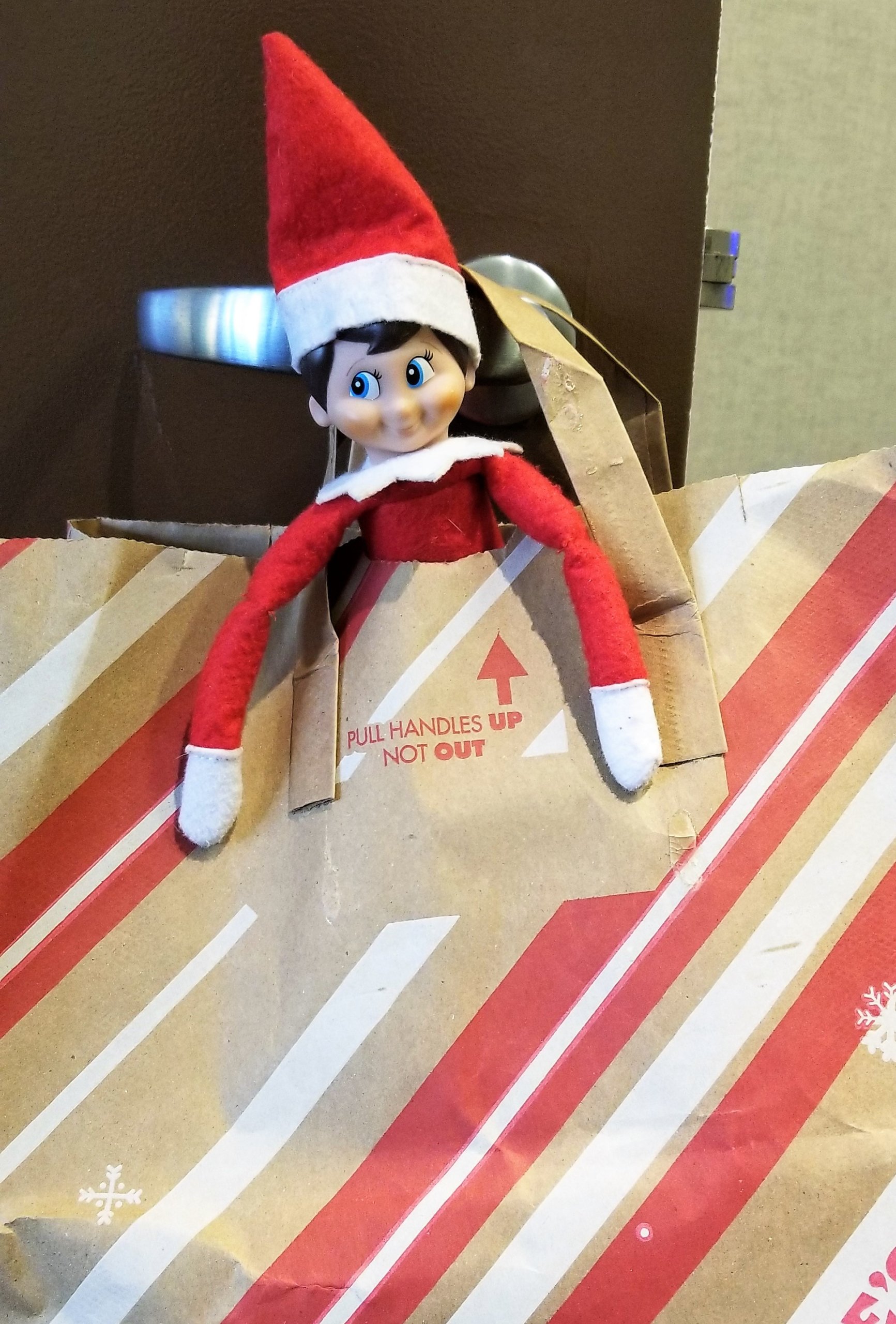 8. Getting to your house from the North Pole isn’t easy—so he’ll ask that you allow him to enjoy a relaxing “bubble bath.” When he’s done, the “bubbles” can double as ingredients for vegan s’mores or be used as toppings for vegan hot chocolate.

9. He’ll sit on a table holding as many colored pencils as he can wrap his arms around and insist on coloring these super-cute animal rights sheets. 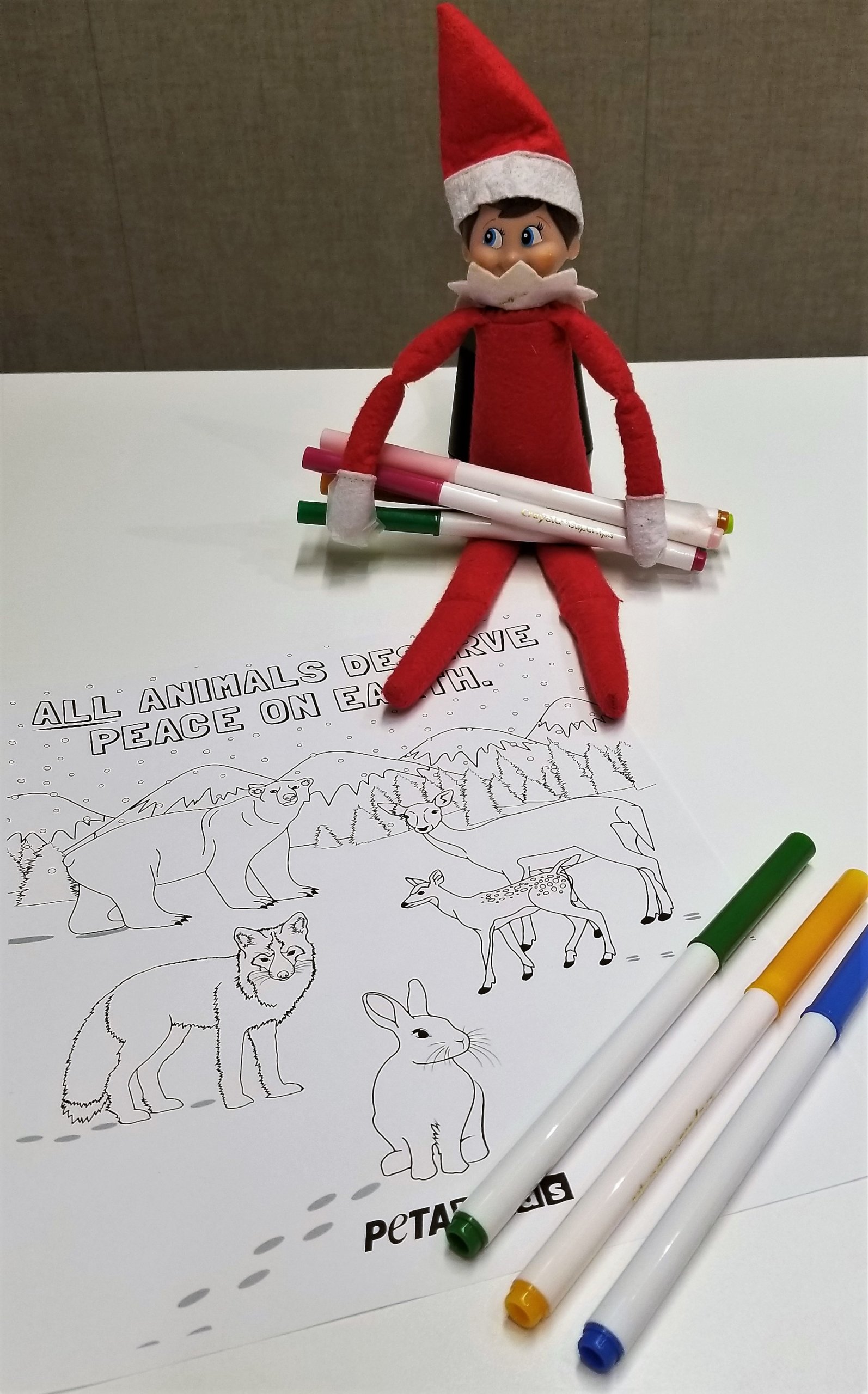 10. If your elf isn’t learning, he’s teaching—even if it’s Saturday! Your family could be woken up by his voice carrying down the hallway as he passionately explains to the other toys that animals are not ours to experiment on, eat, wear, or use for entertainment.

11. He won’t be above holding tight to the remote one night until the whole family finally agrees to watch an animal-friendly flick. 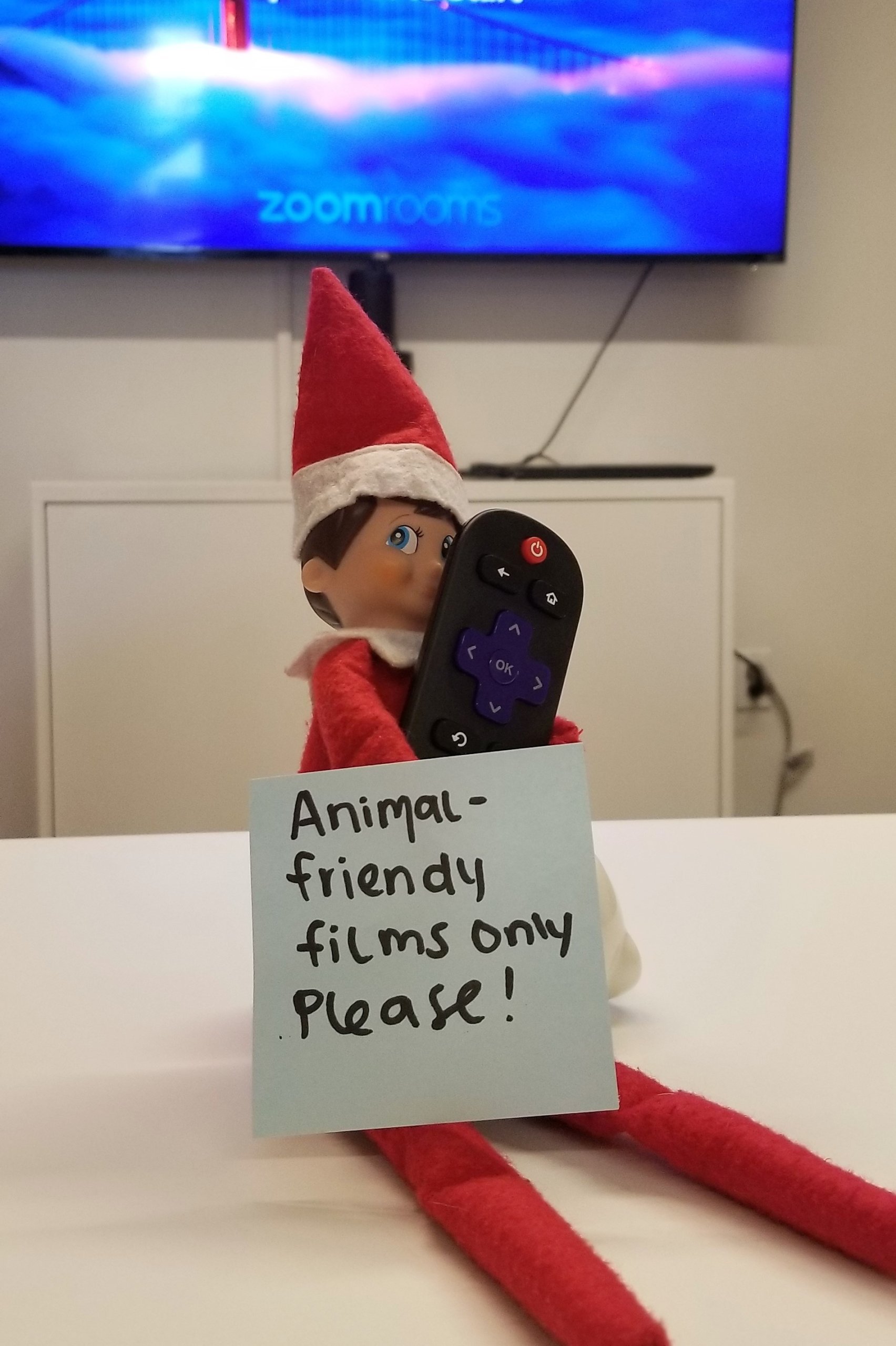 12. If he finds pens lying around, he’ll surely see this as an opportunity to leave little reminders on your bananas for everyone to eat their fruits and veggies.

13. Fact: Elves love arts and crafts. Yours is nearly guaranteed to spend a whole night gathering supplies so that the kids can wake up to a fully stocked table for making animal-friendly Christmas tree ornaments. 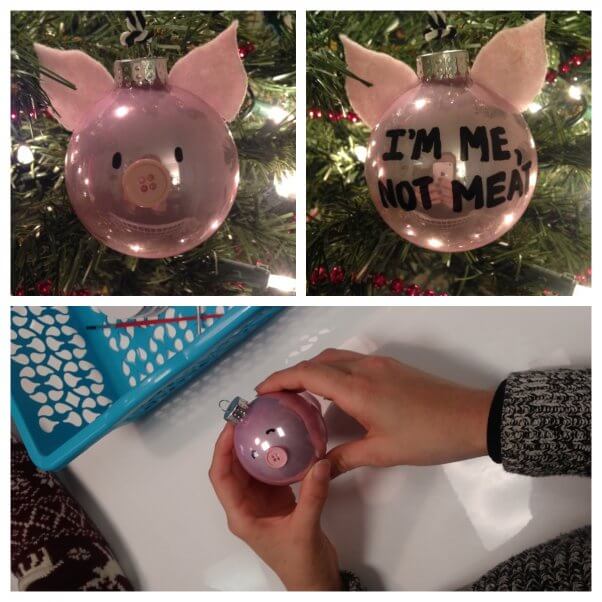 14. Try not to make Elf feel bad when he denies sampling the vegan frosting that was meant for the kids to decorate the vegan gingerbread house. The evidence may be all over his face, but the little guy’s heart was in the right place.

16. Rest assured that he cleared it with Barbie before skipping town in her Jeep. He’s using it because he knows that forcing reindeer to pull a sleigh full of gifts is a major no-no.

The real magic of Christmas doesn’t come from presents—it comes mostly from the warm feelings your family members get when they do something kind and caring for someone else and a tiny bit from convincing your kids that Santa actually sent a vegan elf with a propensity for mischief and a bad case of insomnia to spy on them for a couple of weeks.

These are just a few of the countless ways a cheeky toy can help your family associate the holidays with happiness, health, and helping others. Let PETA Kids know what fun and exciting ideas you used to inspire your family to give back this holiday season by sending some pics of your creative Elf on the Shelf efforts to [email protected]!