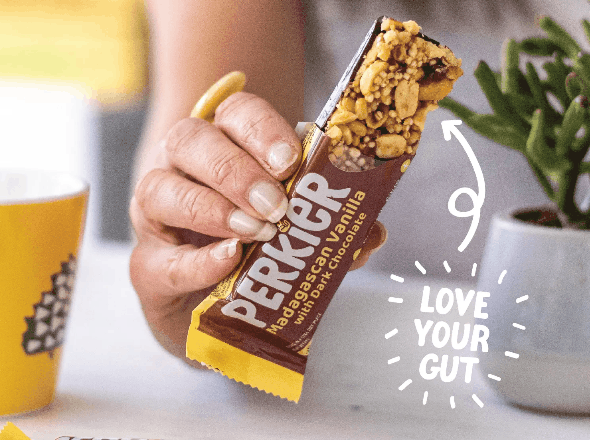 , the UK’s fastest-growing healthy snack bar brand, has completed a highly successful crowdfunding campaign on . The company raised £1 million — 250% more than its original target of £400,000 — from over 300 investors.

Perkier says it will use the new funding for digital marketing, innovation, instore activation, and expanding its team. It was also recently accepted onto Amazon’s Launchpad program, which will allow it to expand into the EU.

The company’s snack bars are already sold at major supermarkets Asda, Sainsbury’s, and Morrison’s, as well as via Amazon and various food-to-go outlets. Sales are increasing by 30% YOY, compared to a decline of -2.9% for the category as a whole.

Perkier’s products are all vegan, high in protein and fibre, and free of palm oil and gluten. It has also created the first snack bars in the UK with added probiotics.

As plant-based eating skyrockets worldwide, many companies are launching new vegan snacks to meet demand, including everything from to and . The market for plant-based snacks is expected to be by 2028.

“We are blown away by the response from investors and so excited to be implementing our plans,” said Ann Perkins, Managing Director at Perkier. “We’re on a mission to make the healthiest snacks on the planet. Consumers are bored of snacks that pretend to be healthy, taste like cardboard, or greenwash their offer.  We’re here to shake up and grow the category. The future is Perkier!”

Schouten Launches Vegan Chicken Dippers as a Snack For Foodservice