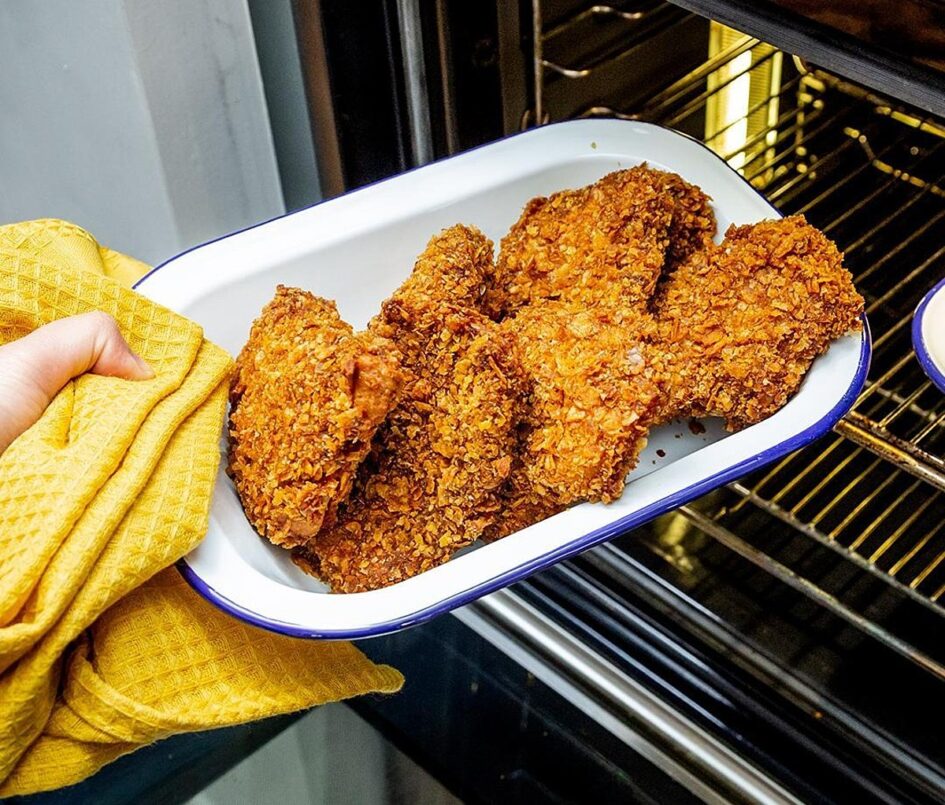 Over the last year, companies and consumers have responded directly to rising concerns regarding sustainability, the environment, animal agriculture, and plant-based nutrition. To celebrate the plant-based innovations seen in 2021, PETA UK just announced this year’s Vegan Food Awards. The awards showcase the plant-based products, restaurants, and cuisines that have propelled the vegan food world into the future. The ninth annual Vegan Food Awards now features 24 categories across the entire food industry.

“Today, more and more humans are recognizing that other animals share their desire to live and that eating vegan is better for their health and for the planet,” the Vegan Food Awards page reads. “And a growing number of businesses understand that vegan foods are profitable and more inclusive, can help them reach their sustainability goals, and are more appealing to that all-important younger demographic, which is passionate about forging a better future for every living, feeling being.

“As a result, you can now find innovative, filling, and simply delicious vegan food pretty much everywhere you go. We’re accelerating towards our destination of a vegan world, and we’re not going to stop.”

PETA’s Vegan Food Awards highlight the most exciting, experimental, and delicious foods to enter the market over the last year. Whether motivated by enhancing sustainability, reducing animal cruelty, or boosting nutritional value, these plant-based foods showcase the impressive potential of dairy- and meat-free products.

If you’re looking to find plant-based products rated for not just taste but also health, check out The Beet’s exclusive Beetmeeters, which rank items for health as well as taste.

The plant-based burger competition is brutal. Over the last year, the foodservice industry truly accepted the vegan burger, spreading across every food category. This year’s UK winner is McDonald’s McPlant burger. The plant-based burger is available for the same price as its signature Big Mac, making it one of the most affordable plant-based patties to hit the market.

The significance of the McPlant stems from its widespread distributions. The biggest fast-food chain in the world holds a huge sway on the global consumer base, meaning that the highly-anticipated plant-based McDonald’s burger reaches the top of the list with ease. Now, the McPlant has been released throughout Europe. The fast-food giant also just announced that the vegan burger will arrive at select locations throughout the United States.

Bacon remains a staple in the American breakfast, making it one of the most difficult alternatives to market to meat-eating consumers. However, Finnebrogue released its Artisan Naked Without the Oink! Plant-Based Bacon earlier this year. The company launched this delicious, bacon alternative in the United Kingdom and experienced immediate success.

Even though this artisan plant-based bacon is only available in the United Kingdom, vegan bacon represents innovation within the market. The company produced a plant-based alternative the replicates the taste and crisp of traditional bacon. Since its release, the company partnered with Costa Coffee to develop the Vegan Bac’n Bap at stores across the UK. While the plant-based brand is constricted to the United Kingdom, the American consumer base highly anticipates its expansion.

PETA announced that the vegan pizza that “has it all” is Chicago Town’s Tomato Stuffed Crust Takeaway Sticky BBQ Jackfruit. The easy-to-bake pizza contains no animal-based ingredients but maintains the integrity of a classic frozen pizza. Chicago Town features a stuffed plant-based crust coated with melty vegan mozzarella. The plant-based pizza is then topped with sticky barbecue jackfruit, red and green peppers, and onion.

Soy and almond have dominated the plant-based milk market for decades. In recent years, the dairy-free milk category has experienced unprecedented growth as more companies begin to develop new forms of plant-based milk including pea, potato, macadamia, and oat. PETA’s winner is an up-and-coming oat milk brand MOMA. The highly versatile plant-based milk can be used for coffee, baking, cereal, smoothies, and more. The brand is marketed as good enough to just drink, containing a significant level of nutrients as compared to other plant-based milk. Across all categories, MOMA ranked higher than a crowd plant-based milk market.

PETA’s plant-based winners cover any category that consumers can think of, giving a full-scale look at the plant-based innovation happening worldwide. The most popular, sustainable, and delicious vegan foods continue to push the plant-based lifestyle into the spotlight, especially as bigger companies like McDonald’s begin to incorporate and advertise plant-based options.

While we listed the top Vegan Food Award Winners, here is the list of all of the winners. Visit PETA’s website here to get a closer look at all the plant-based foods.