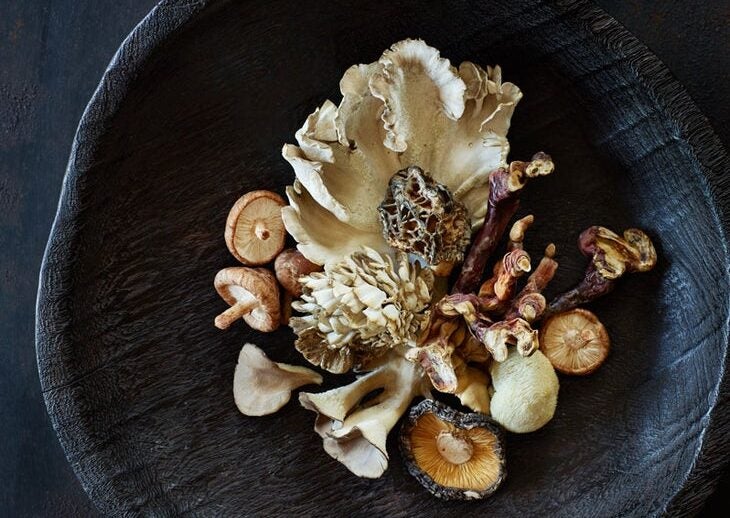 I grew up in Finland on a farm that has been in my family for at least 13 generations. Much of my youth was spent outdoors, learning from and living off the land. These days, when I tell people — strangers, friends, family members, possible love interests — that I am passionate about fungi, the reactions I get are anything but dull. They’re confused, surprised, skeptical, intrigued. Some are even disgusted — I can almost see the thoughts emerge from their heads like a cartoon bubble: “Mushrooms must be big in Finland.” “Just another hipster forager.” “He must be a chef! I’ll ask him about morels!”

These are all valid reactions. People hear the word “mushroom” and often have surprisingly specific ideas of what they think the larger conversation must be about. We’ve all heard cautionary tales about the poisonous potential of mushrooms, and we’ve seen elation spread over the faces of world-famous chefs as they extol certain varietals of fungi in an almost evangelical manner.

The fact that mushrooms can be both poisonous and delicious is fascinating and indicative of their complexity; the kingdom is such a vast and complete entity that both the yin and yang exist in equal measure. Fungi have the capacity to change your life in an immediate, powerful, and exponentially beneficial manner. I know this because I see it happen daily. Mushrooms will blow your mind, just as they blew mine.

The following medicinal mushrooms will balance and restore your immune system, increase oxygen flow to your cells, amp up your mental and creative acuity, regulate your blood sugar, lower your stress levels, ensure restful sleep, and cure myriad physical, emotional, and mental ailments.

Reishi has been used in traditional Chinese medicine for at least 2,000 years, with the first known written records dating from the Han Dynasty (206 B.C. to A.D. 220). Reishi has the ability to boost the body’s immune system to protect it against pathogens such as viruses, bacteria, and parasites. Even when pathogens aren’t present, an optimally functioning immune system will exponentially increase your overall health and wellness to the point where you can witness the effects of aging being reversed — both physically and cognitively.

The compounds in reishi work externally and internally to keep you looking young by reducing dermal oxidation (when proteins on the skin are damaged, causing wrinkles and other signs of aging) and protecting your cellular DNA and mitochondria from oxidant damage, allowing you to remain energized and alert.

Another major benefit of reishi is how it works to achieve hormonal balance. When you have an optimally functioning hormonal system (and surprisingly few of us do — for a slew of reasons, including the impact of environmental toxins and the overprescribing of prescription medications), your body can relax and recover during the night as it is meant to.

One of the most powerful ways I’ve seen reishi in action was with one of my colleagues who suffered from severe seasonal allergies. When exposed to allergens, the body releases histamines, which then cling to cells and cause them to swell and leak fluid — hence the sneezing and runny noses. He started taking just 1,000 mg of reishi daily, and almost immediately his allergy symptoms disappeared entirely. That was nearly four years ago, and thanks to reishi, he can now wake up and smell the roses — literally.

If reishi is the queen of mushrooms, then chaga is the big daddy, the implacable and respected father of the mushroom world. The first recorded usage of chaga dates to 17th-century Russia, where it was widely used in folk medicine to treat everything from cancers to gastrointestinal issues.

Like reishi, chaga has astonishing immunomodulating powers. Chaga polysaccharides, specifically its beta-glucans, have the ability to boost the production of lymphocytes (white blood cell that regulates the immune response to infectious microorganisms and other foreign substances). Chaga is also a rich source of antioxidants. In fact, one dose of dual-extracted chaga (the typical amount found in a single cup of strong chaga tea) packs the same number of antioxidants as 30 pounds of carrots.

For me, chaga has proven itself to be a health miracle. I travel extensively for business, so I am constantly exposed to different kinds of germs. Whenever I feel the inkling of a cold coming on, I double my daily dose of chaga (which is 1,000–2,000 mg of strong chaga extract). As a result, I haven’t been sick in almost a decade. I’m not claiming to be superhuman, but chaga has been remarkably effective at protecting me against the common cold.

Cordyceps is valued primarily for its extraordinary ability to increase energy and reduce fatigue. It’s been a centerpiece of traditional Chinese medicine for more than 1,300 years, with the first known record of its use dating back to the Tang Dynasty in A.D. 620.

Cordyceps is most notable for its energizing effects, due to its beta-glucans. Those present in cordyceps, like all other beta-glucans, deliver oxygen to the body on a cellular level, which not only decreases the occurrence of disease but also increases energy and stamina. Cordyceps also significantly boosts adenosine triphosphate (ATP) levels in the body. ATP is the body’s main energy supply source and is required for all cellular processes. Cells need energy to activate muscles and keep the body moving.

Because it is so effective at increasing energy and decreasing fatigue, cordyceps is a popular and effective supplement for the elderly who are seeking to counteract the lethargy that often accompanies aging, as well as for athletes who are looking to perform at peak levels.

Use lion’s mane to:

Lion’s mane earned its playful moniker because of its unique appearance. Unlike the typical shape of most mushroom fruiting bodies (a smooth cap and stem), lion’s mane looks like a cluster of cascading white strands. This waterfall-like “mane” has inspired all kinds of other fun nicknames for the mushroom, including “pom-pom mushroom,” “bearded tooth,” and “monkey head.”

History suggests that lion’s mane was used in traditional Chinese medicine specifically for treating stomach and digestive problems, including cancers. It was also used as a general restorative due to its anti-inflammatory, antibacterial, and immunomodulating properties. But lion’s mane’s effects on the brain truly distinguish it from other medicinal mushrooms and make it an utterly fascinating subject.

Lion’s mane is believed to have the ability to repair and regenerate neurons, resulting in improved cognitive function, and the mushroom has been known to mitigate and even reverse the effects of neurological diseases such as Parkinson’s, Alzheimer’s, and dementia, among others.

So how does this happen? Your body contains nerve growth factors (NGF), proteins that protect existing neurons and stimulate new neuron growth. These proteins play a crucial role in maintaining the viability of the neurons required for the nervous system to function properly. Amazingly, lion’s mane stimulates the synthesis of NGF. It not only has the potential to help those suffering from neurological disorders, but through NGF stimulation, it can potentially reverse the cognitive deterioration that creeps up on many of us as we age. And unlike most pharmaceutical medicines that are used for cognitive function, lion’s mane has no known side effects.

Use turkey tail to:

Turkey tail earned its name due to the mushroom’s fan shape, which resembles the tail end of Thanksgiving’s favorite bird. Its Latin name means “of several colors,” which is also fitting, as this mushroom can be identified by the concentric circles of varying colors that appear on its fruiting body.

Like many other mushrooms, turkey tail is full of polysaccharides and triterpenes that give it its immunomodulating properties, providing overall immune support and regulation. But what sets turkey tail apart are two of its unique beta-glucans: PSK and PSP.

PSK has received national media attention for its anticancer properties. PSK and PSP in turkey tail have the ability to regenerate white blood cells (which are necessary to ward off infection) and stimulate the activity and creation of T-cells, macrophages, and natural killer (NK) cells, enabling the immune system to once again ward off and destroy pathogens. PSK is the best-selling anticancer drug in Japan, and is used in combination with surgery, chemotherapy, and radiation therapy.

RELATED: These Vegan Superfoods Are Linked to Cognitive Function