Herman Miller’s Aeron Chair Is Now Made With Reclaimed Plastic 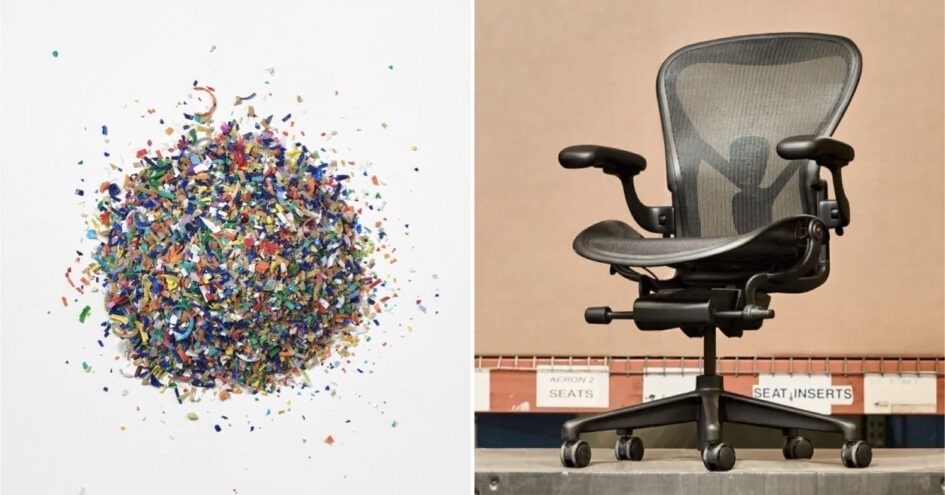 Your WFH sitch just got a little more eco-friendly. Herman Miller has given its Aeron chair collection a sustainable makeover.

The Aeron chair quickly became a staple in offices following its debut in the 90s. And—despite its exorbitant price tag (a cool $1,200!)—the ergonomic chair is a best-seller. But now, the company’s iconic chairs will be made from ocean-bound plastic, such as plastic bottles, caps, and fishing nets.

Each Aeron chair will now feature 2.5 pounds of plastic waste that has been reclaimed from waterways. According to the company, this will help keep more than 150 tons of plastic from entering the oceans each year. This figure equates to about 15 million plastic bottles.

Herman Miller’s use of ocean trash will help it achieve its goal of using 50 percent recycled materials in all of its products by 2030.

The move is part of the company’s membership with NextWave Plastics. Founded in 2017, the consortium is made up of 10 companies committed to fighting the plastic pollution crisis. Each member helps to achieve this by integrating ocean-bound plastic into their supply chain.

NextWave Plastics says that “​​by working collaboratively across and within industries, [they] can demonstrate the possible and articulate measurable impact that will inspire others to become engaged in ‘turning off the tap’ on ocean-bound plastics.”

According to the International Union for Conservation of Nature, more than 300 million tons of plastic are produced annually. Of this amount, about eight million tons wind up in oceans each year.

Plastic waste winds up in the bellies of marine life, resulting in injuries and even death. Plastic pollution is also toxic for the environment, emitting greenhouse gases as they degrade—further exacerbating global warming.

“​​A critical strategy to disrupt that path is to demonstrate the value of ocean-bound plastic,” said Dune Ives, CEO of Lonely Whale, an ocean conservancy group that leads the consortium. “Herman Miller is not only proving the commercial value of the material, but showcasing the power of collective action in developing ocean-bound plastic supply chains.”

The plastic used to create Herman Miller’s Aeron chair is currently sourced from India and Indonesia. In addition to ridding waterways of trash, the initiative supports these economies by employing locals to collect the plastic waste.

The eco-friendly chair is currently available in a new colorway, Onyx, with Mineral, Carbon, and Graphite colorways to come.