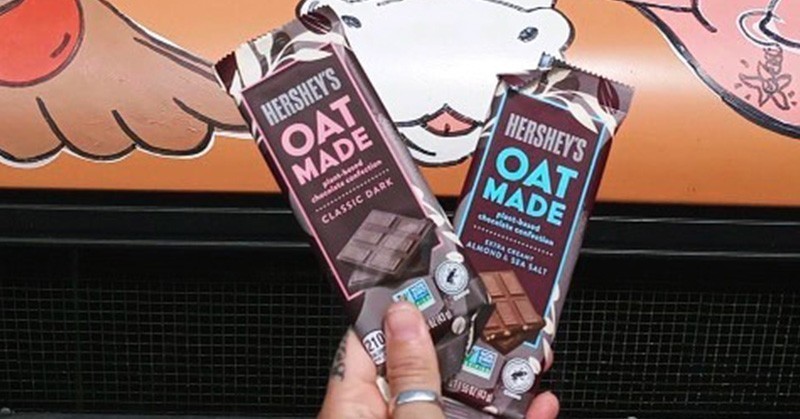 The days of choosing vegan-by-default dark chocolate in the candy aisles to make vegan s’mores are behind us (but hey, no hate if that’s what you like—we love our dark chocolate!) because Hershey’s just released a vegan oat milk chocolate bar!

The New Hershey’s Vegan Chocolate Bar Is Available at Target

The new Hershey’s chocolate bar was first found at Soul Miner’s Garden, a food truck in North Carolina. Social media has been lighting up since the discovery, with vegans wondering where to locate the product as Hershey’s has not released an official statement regarding this sweet treat.

We can now confirm that the new Hershey’s vegan chocolate bar is currently available at Target! As of right now, it looks like only a few Target stores on the East Coast are carrying the product in-store, but the bars can be shipped nationwide, so check your Target app for availability near you.

According to the popular Instagram account @bigboxvegan (where the shared picture of the vegan chocolate bar went viral), customers have successfully ordered the products to be shipped as far west as California!

In February of this year, Hershey’s launched their “better for you” campaign, which included a promise to release more products with organic, reduced sugar, plant-based ingredients. While Hershey’s still hasn’t released a statement on the launch of the vegan chocolate bars, this is big news if it’s just the beginning of a plant-based lineup.

So cheers for more Hershey’s vegan options! Get those marshmallows, graham crackers, and skewers ready, and give Hershey’s a follow on Instagram (@hersheys) to stay current on all updates on the vegan chocolate release.