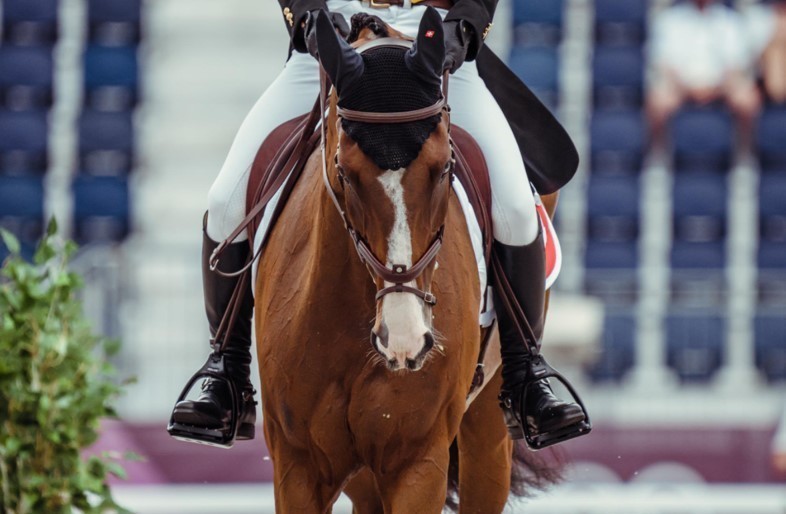 During an equestrian (horse-riding) segment of a pentathlon at recently-concluded Olympics, a horse named Saint Boy refused to do what it was expected to do, making its rider and the coach furious.

The horse, which was meant to jump some fences as part of the pentathlon, stood at one place going back and forth, much to the dismay of the rider. In a bid to make her mount jump, Annika Schleu, started punching it, and her coach joined in too, drawing flak from animal lovers across the world.

The incident finally ended in the dismissal of coach Kim Raisner since she violated the International Modern Pentathlon Union (UIPM) rules. The German Animal Welfare Association criticised Schleu for having “roughly beaten the frightened and overtaxed the horse several times”.

Saint Boy was later sent back to his owners at Shiga Prefecture in Honshu. In a social media post, UIPM posted an update from the horse’s owners: “He is in good health, although fatigued from competition.”

Here is #SaintBoy back home in Shiga Prefecture.

Saint Boy’s owners at the Minakuchi Riding Club kindly provided an update on his condition after being contacted by @Tokyo2020 officials.

They said: “He is in good health, although fatigued from competition.” pic.twitter.com/oiACwR1wqx

Interestingly, this is not a lone incident. A week prior to this, a horse ridden by Swiss participant Robin Godel at the Tokyo Olympics had to be euthanized after an irreparable ligament rupture in the lower right limb. The horse named Jet Set, aged 14 years, started limping near a fence in the middle of the race, after which the event was put on hold.

Equestrian federation said in a statement, “Ultrasound scans revealed an irreparable ligament rupture in the lower right limb, just above the hoof, and on humane grounds and with the agreement of the owners and athlete, the decision was taken to put the horse to sleep.”

It is with great sadness that we announce that the Swiss horse Jet Set, ridden by Robin Godel has had to be euthanised after pulling up extremely lame on the Sea Forest Cross Country Course during the Equestrian Eventing at the Tokyo 2020 Olympic Games on 1 August 2021. pic.twitter.com/B5hUZv2Pux

Similar problems were encountered by Italy’s pentathlon competitor Elena Micheli, whose horse Cristbal 21 threw her off twice and even ran through one fence. Brazil’s Ieda Guimaraes’ horse Caleansiena YH also bucked her off and refused to cooperate.

In view of an unending series of such unfortunate events, PETA urged Thomas Bach, president of the International Olympic Committee, to eliminate all equestrian events from the games.

In a statement, PETA President Ingrid Newkirk said, “The Olympic Games showcase human athletes, not the ability to terrify and injure horses who don’t choose to compete yet are doing all the work, sometimes at the cost of their very lives.”

“Just as the games have evolved to include modern sports like skateboarding, PETA is calling on the International Olympic Committee to relegate abusive equestrian events to the history books.”

The history of equestrian events in Summer Olympics dates back to 1912 when International Olympics Committee ensured that the sport would become a vital part of the event. It includes equestrian disciplines of “Dressage, Eventing, and Jumping”.

But, why do horses “misbehave”?

Put simply, horses are never given a choice as far as participating in Olympics or any other games goes. Unlike humans, who choose and train to excel in these events, animals don’t, and are therefore, forced to perform even when they don’t want to.

Since 1996, several studies have proved that heat and humidity affect horses who take part in equestrian events. In view of the same, mist-spraying stations for horses were provided by the organisers of Tokyo Olympics to comfort them in the scorching heat and intense humidity.

Even with all these tools, horses continue to suffer from heat as they are made to gallop and race for miles without rest.

The heat, combined with the stress of performing at an event in an unknown setting, is enough to make these intelligent and sensitive animals go out of control.

Horses, who once belonged in the wild, are herd animals who prefer to graze in meadows and travel long distances with their family. They are not meant to stay with humans or compete at games created for human entertainment.

Ren Hurst, a horse trainer for 20 years, stopped training horses when she realized “she wanted to be with the horses in a way that their relationship matters more than the results of races”. She also wrote a book ‘Riding On the Power of Others: A Horsewoman’s Path to Unconditional Love’.

Hurst has been quoted as saying, “We have this fundamental responsibility to not take advantage of animals who have no control over whether or not they live with humans.”