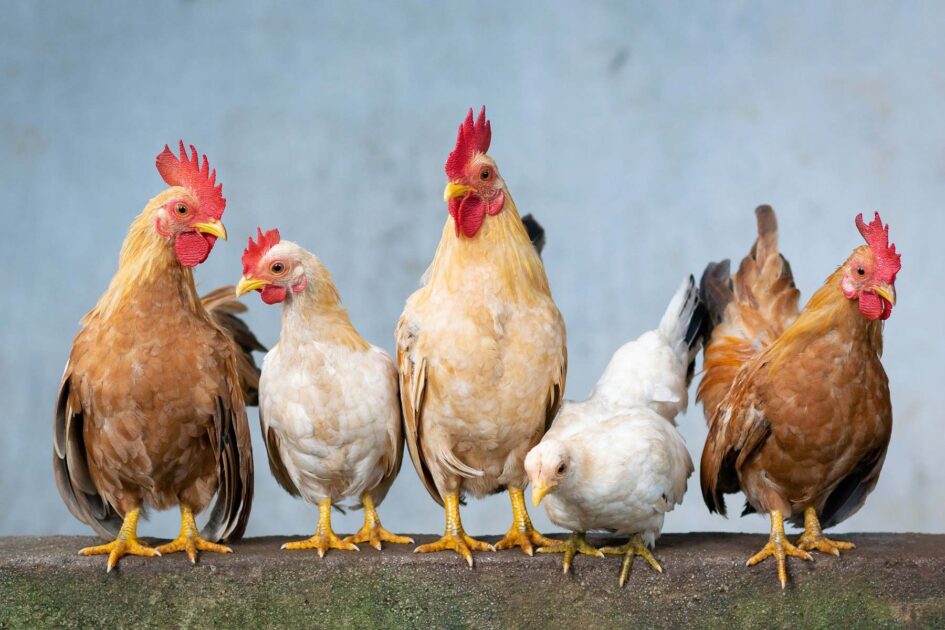 Chicken nuggets have become a popular choice worldwide, as the trend for hand-held fast food has grown. But what do we really know about how they are made, and the impact they have on our health, the environment and on animals?

What Are Chicken Nuggets Made Of?

The meat inside nuggets, unsurprisingly, comes from chickens. It can be pieces of ground-up meat but often it is “mechanically recovered meat” or MRM. This is the remaining shreds of flesh that are blasted off the bone after the carcass has been butchered.

How Are Chicken Nuggets Made?

The reason chicken nuggets are so cheap is because of factory farming, and the reason they are so tasty is because they taste nothing like chicken meat. Let’s take a look at the whole process, from living beings through to heavily marketed ‘nuggets’.

Take A Chicken From A Crowded Confinement

Almost all chickens in the US, Europe and elsewhere are confined inside factory farms where they are kept alive but none of their other needs are met. Because tens of thousands of birds are held together in each shed, and there may be a dozen or more sheds on each farm, their lives are cheap. The birds do not get individual care and attention, and millions suffer to death right there in the sheds, unable even to survive six weeks in the squalid conditions. Six weeks? Yes, these birds have been genetically manipulated to put on weight fast which makes their bodies balloon (and their hearts fail and their limbs break) but despite their size, they are just babies when they are killed.

Feed Her Low-nutrition Food And Antibiotics

The margin of profit for each bird is so small that every cost is carefully managed. The feed given to the birds needs only to ensure their weight rises dramatically, it does not need to sustain them healthily. And so their feed is made up of cheap ingredients, including significant quantities of soy, much of it grown on deforested lands and shipped around the world. And because of those conditions – immunocompromised birds packed in together in filthy surroundings, often with no fresh air, and nothing to exercise body or mind – the birds are routinely fed antibiotics, in a bid to keep as many as possible alive through those six short weeks. The widespread use of antibiotics in farmed animals helps drive antibiotic-resistant pathogens in people. Already, drug-resistant bacteria sicken 2.8 million Americans each year, and kill around 35,000 people, according to the Centers for Disease Control and Prevention.

Dispose Of Sick And Dead Chickens

Unsurprisingly, in those conditions, many birds succumb. Their bodies are simply thrown in the dead bins or left to rot where they lay. Even birds who are ailing but still alive have been found tossed in the trash, and left to suffocate under the weight of their dead companions. It truly is a heartless industry.

At the end of the six-week cycle, the sheds are emptied. The birds are packed into crates, either physically by catching gangs who work fast, grabbings birds by their legs and wings, or mechanically, where the animals are swept up by machinery. Once packed tightly into a crate, many already suffering broken legs and wings, the birds are loaded onto trucks and transported through all weathers – blistering heat, driving rain and unbearable cold – over long distances to get to the slaughterhouse. There, they may be shackled upside down while still conscious, and their throats are cut. Attempts at stunning do not work for every bird. Some slaughterhouses gas the birds to death in specially-constructed chambers.

Pluck The Chicken In Boiling Water

Once they have been bled, the birds’ bodies are tipped into hot water baths to loosen their feathers, and then it is on to the butchery line.

The meat is cut, stripped and blasted off the bones. Any parts that can be profited from are cut out, including the feet, and then the meat destined for nuggets is ground down.

Season To Mask The Flavor

Flesh does not taste great on its own. To make it palatable, it has to be flavored and it is the seasonings used that make nuggets so tasty. The good news is that all those seasonings come from plants, and so it is easy to create vegan chick*n nuggets that have all the taste and texture and none of the suffering or environmental impact.

The minced meat paste is cut into cute shapes, to make them handleable and easy to consume, and then they are fried. We tend to crave high-fat products like these – a throwback to our evolutionary history when finding calorie-dense foods was beneficial – but today they come with considerable health implications.

The Truth About Chicken Nuggets

There some pretty unsavory truths about chicken nuggets.

According to the USDA, mechanically recovered meat, also known as mechanically separated meat, is “a paste-like and batter-like meat product produced by forcing bones, with attached edible meat, under high pressure through a sieve or similar device to separate the bone from the edible meat tissue.” This looks like, and has become known as, pink slime. And it is this slime that is shaped and coated and sold to us as food.

Research shows that almost every animal product – including chicken – is worse for the planet than almost every plant product. Chicken meat, for example, produces three times more climate-changing emissions than tofu, and it is inextricably linked with deforestation, as much of the feed shipped to factory farms around the world contains soy grown on deforested lands. When trees are cut down, wildlife is lost. Chicken farms are also renowned water and air polluters, and this also has a profoundly negative impact on wildlife. Overall, chicken farms are really bad news for the planet.

Are Chicken Nuggets Bad For You?

They’re certainly not a health food! In 2015, The World Health Organization confirmed that all processed meats – such as chicken nuggets – cause colorectal cancer, and there is also an association with stomach cancer. Plus, there is strong evidence to suggest a connection between a higher consumption of fried foods and chronic diseases, including type 2 diabetes, obesity, high blood pressure, and heart failure.

And let’s not forget the pathogens associated with handling and eating chicken – things like salmonella, campylobacter and E.coli. These are responsible for making millions of people sick every year.

There is a broader health risk, too. When we consider that chicken farms are associated with serious pandemic risk and also contribute to antibiotic-resistant pathogens emerging, we can see just how dangerous the chicken farming industry is.

Most people hate factory farming, and know that the animals confined inside such facilities have a miserable life. And yet, we are so disconnected from our food systems that we may not realize that almost every single piece of chicken consumed in the US, Europe and elsewhere comes from this very system we dislike.

Tens of thousands of birds are packed into each unit. There is no enrichment, nothing to occupy their bright, inquisitive minds. The birds are permitted nothing but food and they are allowed to live just six weeks. Because they have been purpose-bred to put on weight fast, their hearts and bones come under enormous pressure. All too often hearts fail and legs break under the strain. Just imagine standing your whole life on broken legs, with no pain relief, no care at all. It’s a pitiless industry that causes immense suffering.

When we weigh up the pros and cons of chicken nuggets, we balance taste against animal suffering, environmental degradation, personal and public health. So, what if we could avoid all the bad stuff and still get the flavor we love? We can. There are many companies producing super tasty vegan fried chick*n that looks, cooks and tastes like chicken, but does not come with the raft of negatives.

There is a phrase we love and feel inspired by: “be the change you want to see in the world.” If we don’t want to live in a world where animals endure factory farming and slaughter, where one reckless industry pollutes and poisons our planet and raises serious public health risks, we can do something: we can simply stop supporting it.