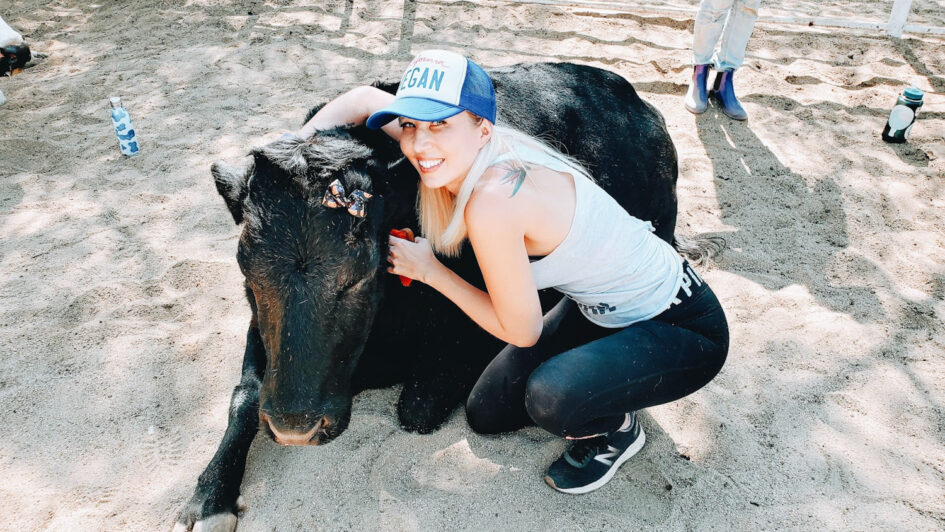 When I made the decision to go vegan almost eight years ago, I was angry—like, Scorpio-style angry. I was rageful at meat companies, furious at people who were complicit in the death of animals, and irate at the world.

There wasn’t much joy in my new veganism, since I was consumed with sadness and anger. For those who know me now, my past lack of joy may strike you as odd: I’m the one with bright nails and a bright smile and am pretty damn happy most days.

But eight years ago, all I could think about was: How could we torture and kill animals, as though their lives meant nothing? How could people continue to eat meat and dairy, seemingly without caring? How could the animal agriculture industry hide its horrors so effectively?

I had to help find the answers to these questions, so I shared my new passion for veganism with the ones I loved. I assumed they’d join me, but most didn’t—especially if I spent too much time talking about the horrendous, awful nature of animal agriculture.

Then came a turning point. I hit my mom with the singular truth—as I saw it. I opened her eyes to the horrors of meat and dairy. I educated her about everything I’d learned, and she was as shocked and upset as I was. “You mean dairy cows have to have a baby in order to give milk?” she asked, astounded.

I thought she’d go vegan right away—because we were so close, and because of her deep and abiding love for animals. But she wasn’t there in her journey. She couldn’t commit to the shift, but what was actually critical here was my pained response: I just couldn’t accept it.

My mother empathized with the animals, but it wasn’t enough for her to completely give up meat and dairy. She went mostly vegetarian, but in my eyes, that just wasn’t good enough (cue heavy-handed judgment here). To be honest, it annoyed me.

My anger was completely uncalled for—but hindsight is 20/20. I wish I’d realized then that not only were her actions none of my business, but that raging at her certainly wasn’t helping any animals. So, the million-dollar question: What actually did help the animals? And the answer is … her switch to eating mostly plant-based foods. Say it with me: Incremental change counts.

I wasn’t always vegan, so who am I to judge another’s journey?

Gradually, friends and colleagues in the vegan community with a more positive, gentle approach to advocacy started having an effect on me. These people believed in meeting someone where they are. What does that mean? It means that instead of approaching someone with the idea of rapid conversion, maybe cranking it down just a notch. It’s about encouraging even the smallest of changes.

This approach really hit home for me. I realized that the whole world doesn’t need to become vegan for us to shift away from animal agriculture and towards a brighter, more compassionate future. Each individual is on their own journey and every step counts. Statistically, flexitarians are driving the adoption of more plant-based options, so we need to encourage every change!

I also realized that being angry and judgmental (even just on the inside) was completely antithetical to my goals of living a kinder, gentler life. When I started to learn to accept that everyone is on their own path, I began to let go of trying to control those outside of myself. And I became so much happier with that revelation!

A newfound sense of joy and acceptance

I was suddenly free. My new approach took the weight of the world off my shoulders. I didn’t have to force anything or aggressively change anyone’s mind. Instead, my focus became my own life, becoming the best and happiest Hannah I could be—and showing the world that I’m not deprived of anything.

Ever since I stopped judging others, I’ve found my way to outrageous joy. In my experience, veganism has made me progressively happier. Knowing that I’m doing my best to tread lightly on the planet, save the lives of animals, and take care of myself sends me over the moon with gratitude and appreciation.

Honestly, I’ve learned that accepting people’s choices—and accepting my own imperfections as a vegan—is far more powerful than judgment. Accepting others for who they are is a gift we can give them. And the same goes for accepting ourselves.

It’s okay not to be a perfect vegan

I was at a major vegan event recently and a good friend was speaking on a social media panel. Midway through her speech, she gave me a shout-out, saying that before she was vegan, I was the one vegan friend who never, ever judged her, and it was this approach that helped get her to where she is today. It warmed my heart to hear that and proved to me that the power of non-judgment is palpable.

After all, am I a perfect vegan? Absolutely not. Sometimes I accidentally eat something with cow’s milk in it. I drink beer that I haven’t vetted on Barnivore. I eat food cooked on a shared grill with meat. I’m far from perfect, and I’m okay with that. I don’t judge myself anymore, either, because I’m doing the best I can.

These days, my lifestyle is one of love, fun, and joy. I’m here to enjoy the journey and I flaunt that attitude. It’s my mission to wear bright colors, to dance in the rain, to sprinkle cruelty-free glitter everywhere I go. From my “Vegan Babe” bumper sticker to my always-changing vegan hair color to my upbeat attitude, I hope I’m showing people how amazing this lifestyle is, and how much fun can be had when you approach the world through the lens of kindness and love.

With my joy, I’ve attracted folks to the vegan way. One time I held a pizza party for a whole group of meat-eating friends and everyone was so into it! Especially that buffalo chk’n pie — yum! I just keep taking small actions like that, and so many of my close friends have cut back on meat and adopted a flexitarian lifestyle. We’re all role models to those in our circles, and people notice when we become the best versions of ourselves.

Focusing on my positive impact

So how do I practice positivity, even with all the horrors of animal agriculture that still exist? These days, when I pass a transport truck, I send the animals love. If I’m sitting next to someone eating meat, I pay attention to my own delicious meal — I direct my energy towards my personal choices because that’s the only place where I have any control. If I see a McDonalds commercial featuring meat, I think about the positive strides we’ve made for plant-based eating. It’s all about shifting your attention to something good. And there’s so much to be happy about these days.

I also direct my energy towards positive actions I can take, such as advocacy for the animals. Instead of pointlessly focusing on other people’s behavior or beliefs, I strive to do what I can to move the needle—whether that’s writing a story about a new vegan option at a fast-food restaurant, volunteering with a sanctuary, or wearing super cute crop tops with a vegan message.

As a vegan, my lifestyle is built on love—love for the animals who share this world, love for my fellow humans, love for the planet, and love for myself. And if I truly believe that love is the answer, then I need to extend that love to all, including people who make different choices than I do.

‘Love’ According To UMass: Imprisonment, Torture, And Death