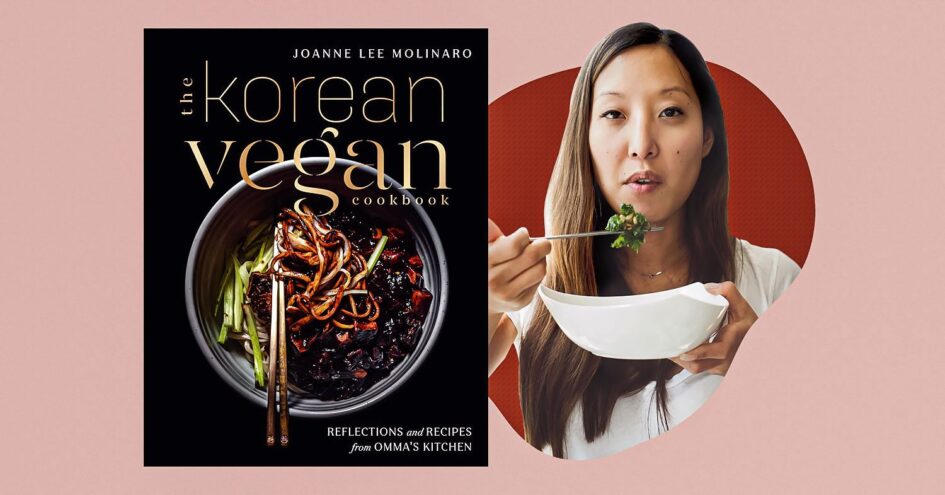 A superhero of compassion—that’s who Joanne Lee Molinaro wants to see in the next Marvel comic. Molinaro dreams of a superhero who demonstrates that empathy is strength, that kindness is world-saving, and that understanding can create better connections between us all. And perhaps that superhero could be named The Korean Vegan, because it’s these values that underpin Molinaro’s blog, social media channels, and her upcoming cookbook, titled The Korean Vegan: Reflections and Recipes from Omma’s Kitchen (October 12, 2021).

Five years ago, The Korean Vegan blog became a place where Chicago-based lawyer and long-distance runner Molinaro could play with plant-based recipes and destress from her busy day-to-day. But thanks to an astronomical rise on social media, it has become so much more. It became a second career, just as demanding and rewarding as her first, but with an arguably bigger opportunity for impact. She has accumulated an audience of more than 530,000 on Instagram, and despite just making an account last year, she has amassed a following of 2.6 million on TikTok. Recently, Molinaro announced that she’s leaving her job as an attorney to devote herself to her Korean Vegan platform full-time.

Molinaro’s following is growing fast because her recipes are delicious, accessible, and make veganism fun. But it’s also because with each one, she shares her heart, her experiences, and her life as the daughter of Korean immigrants living in the U.S. With each post, Molinaro schools her audience on anti-racism, toxicity in the workplace, heartbreak, love, friendships, social media trolls, and everything in between.

We spoke with the recipe developer and TikTok star about why she chooses to share her vulnerability so candidly, her upcoming cookbook launch, and why compassion is at the root of everything that she does.

LIVEKINDLY: How does it feel to be launching a cookbook?

Joanne Lee Molinaro: It’s exciting! Kind of like having a baby, I would imagine. I’ve been working on this for a really, really long time. As the day of launch gets closer, I’m filled with incredible excitement. But there’s also a little bit of anxiety. I think, ‘How is the book going to be received?’ ‘Are people going to like it?’ ‘What if they hate it?’ But overall, it’s incredibly emotionally rewarding to see something that you’ve worked so hard on be put out into the world. I started The Korean Vegan thinking that literally my mom and my boyfriend (now-husband) would follow me, and that’s it. To be in this current position is absolutely nothing I could have imagined in my wildest dreams.

LIVEKINDLY: You started The Korean Vegan around 5 years ago. It’s been an incredible journey for you since then. If you could go back and speak to yourself before you started, what would you say?

Molinaro: If I could give her some advice, it would be: “everything you do, please do with intention.” And “please, please, please, do not forget the importance of enjoying this. Don’t ever let it become a burden. Don’t ever allow it to become work. This is something at its heart that should be enjoyable to you.”

LIVEKINDLY: Will the cookbook be a reflection of your social media platforms?

Molinaro: I remember when I put the pitch together, I included my Instagram post about my first marathon. It was a story about my father at the 20-mile marker. He’d been sitting there all morning since literally 6 a.m. It’s cold at that time of day, at that time of year, but he’s sitting there holding a water bottle for four hours. Because he wants to make sure that when his daughter crosses that mile marker, he’s there for her with that water bottle. That was the first story that I shared about my father on my TikTok, and it racked up like three or four million views in no time. [Sharing stories with my recipes] has always been the idea behind this cookbook, long before I even started my TikTok. How rewarding is it that my idea has actually stuck and that there are people who can really relate to that?

LIVEKINDLY: Why did you begin to share intimate details about your life on social media?

Molinaro: I felt that, at least here in the U.S., there was a disconnect between people who were familiar with the immigrant story and people who were not. So that’s why I started sharing stories about my family.

Some of the stories I share are not even about being an immigrant. But I feel like being a child of immigrants is literally part of everything I do, say, feel, and think. So any story about me or my family is inherently awash in that narrative. That’s really why I started sharing, with the hope of not only showing people, ‘Hey! This is what it’s like!’ But also showing them that there are a lot of points of connection. There are so many relatable moments, even if you’re not from an immigrant family. There are a lot of things that connect us, that offer opportunities for engagement, empathy, sympathy, and true connection.

LIVEKINDLY: Do you think that sharing that vulnerability has been a big part of your success?

Molinaro: It has created an opportunity for an impact that I did not realize I would eventually have. Between all my various social media accounts, I have over three million people who are listening to me, who are opening their hearts to me. I think that level of impact is a direct result of me putting myself out there and being vulnerable and willing to subject myself to everything that comes with that vulnerability—the good and the bad.

LIVEKINDLY: You say you have people opening their hearts to you. What’s the most moving comment you’ve received?

Molinaro: There are so many—and different kinds, too. Of course, I love hearing ‘Oh my god, I’m going to go vegan because of you!’ That makes me very happy. But it makes me probably even happier when I hear somebody saying, ‘Wow, I never thought of it that way.’ Or ‘I never realized that me saying that could hurt somebody.’

In my elementary school, kids used to sing ‘Chinese, Japanese’ while they slanted their eyes at me. I shared how upsetting it was to me, and the number of comments I received from people saying ‘Oh my god, I used to be one of those kids saying that to Asian friends, and I never realized how traumatic that could be.’ Seeing those kinds of comments not only makes me feel like I’m impacting people in a way that’s important, but it also heals me from my own personal trauma.

LIVEKINDLY: Have you had negative feedback? How do you handle that?

Molinaro: All the time. I could give a glib influencer type answer, like ‘hey I know that my job is to take that and I let it roll off and I don’t take it personally and I don’t let it affect me.’ But I am not like that. Because I am so personal in my content, when somebody responds in that way, I do have a tendency to take it personally.

That said, I also understand one of the areas that I can improve on, as a person, as Joanne, is to learn how to not be so defensive. I can learn how to not take everything so personally, and maybe to find the nugget, the little kernel of constructive criticism, and work off of that. Or learn to just say: ‘There are people out there who are going to react negatively, who are going to react with nothing but horrible intentions. And it’s because they’ve got issues that they are dealing with and you don’t need to internalize those. Just let them be and move on and continue to focus on those who you can impact in a positive way.’

I am a big proponent of any change, in the right direction.

LIVEKINDLY: All of the recipes in your book are plant-based, but they feel accessible to everyone. So what are your views on flexitarianism and the power of small changes?

Molinaro:
I am a big proponent of any change, in the right direction. I’ll be very candid here, I have been very open about my struggle with disordered eating, and with overcoming that. It’s something that I feel I will probably have to grapple with for the rest of my life. Good or bad, that’s just the way it is.

This idea of a flexitarian diet—think about the ramifications, if one person decides ‘once a week, I am going to ditch the meat and I’m going to have a completely plant-based day.’ Multiply that by hundreds of thousands of people here in the U.S. When you think about the impact that one meat-eating meal has on the planet, has on animals, and you multiply that by 100,000, and you immediately take that out of the equation. Why is that not a good thing? Why is that not a thing that should be celebrated, encouraged, reinforced?

LIVEKINDLY:  What’s the main thing you want your followers to take away from The Korean Vegan?

Find out how to make Molinaro’s signature Braised Tofu recipe, taken from her upcoming cookbook, here. And to order your copy, head here.

The Korean Vegan’s Dooboo Jorim Is Fancy Tofu Made Easy