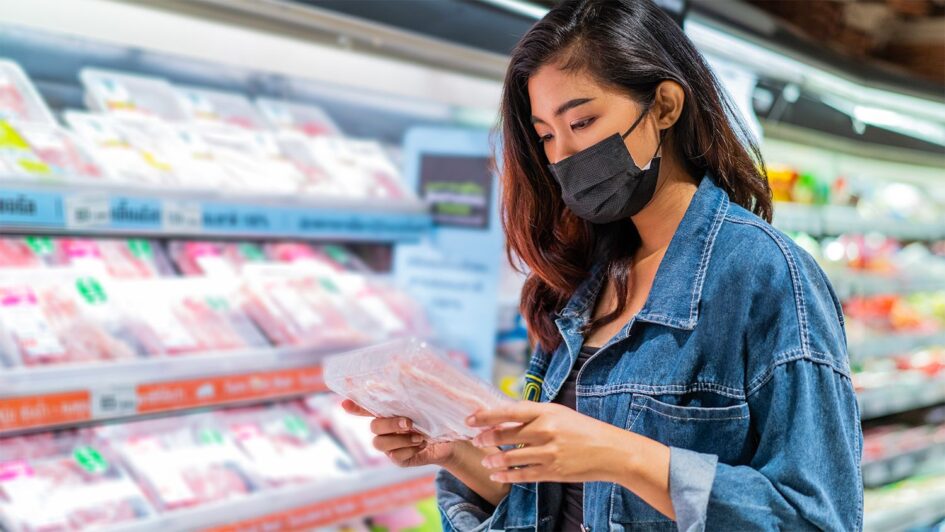 Skyrocketing meat prices are hurting all consumers, even those who stick to plant-based products.

While issues of environmental abuse and corruption in the meat industry are public knowledge, labor abuse concerns came to light during COVID, sparking a reexamination of the industry. Now, there’s a new concern: illegal price-fixing in the meat-processing industry has led to skyrocketing prices for already-struggling shoppers over the past year and a half. These exorbitant meat prices have led some households to reduce meat consumption or replace it with plant-based alternatives altogether in order to keep grocery bills low. Put simply, the rising price of meat is making grocery shopping more expensive for everyone.

Since December 2020, beef prices alone have gone up by an astronomical 14 percent, says the Biden-Harris administration, which is pointing a finger at a few multinational conglomerates that have created a chokehold on the meat supply chain.

Biden has vowed to crack down on “Big Meat” as well as support small farmers and ranchers in order to lower grocery prices for the average consumer and family. In a strongly-worded release from The White House last Wednesday, Biden put Big Meat on notice: “The Biden-Harris Administration is taking bold action to enforce the antitrust laws, boost competition in meat-processing, and push back on pandemic profiteering that is hurting consumers, farmers, and ranchers across the country.”

How rising meat prices hurt everyone

Rising meat prices are contributing to high inflation just as federal pandemic jobless benefits have expired, leading many panicked families to struggle to put food on the table, even with meager SNAP benefits that average $125 per person per month. On Tuesday, the Labor Department reported that the consumer price index for all goods rose 5.3 percent from August of 2020 to August of this year. This is the worst rate for consumers since the height of the 2008 recession, which means that not just meat, but also other groceries or goods like cars and electronics, are more expensive for the average shopper.

In the past 12 months, beef has gone up 12.2 percent, pork 9.8 percent and chicken 7.2 percent, making up half of the price increases at grocery stores. Meanwhile, the cost of plant-based alternatives has been falling as sales and, more importantly, scale has increased.

In June, Eudelia Pena, a 48-year-old New York City resident who lives with her husband and one of her three children, told Bloomberg she had cut her meat purchases in half due to rising costs and the financial hardships posed by the pandemic. “With what I spend today, I don’t bring back even half of what I used to,” she told reporters. “I used to buy two chickens. Now I just buy one and split it in half.”

While Pena is cutting back on meat, other shoppers are increasingly seeking alternatives.

According to a Bloomberg Intelligence report, Plant-Based Foods Poised for Explosive Growth, the market for plant-based alternatives could grow to $162 billion in the next decade, a soaring climb up from $29.4 billion in 2020. Researchers expect plant-based food alternatives to reach 7.7 percent of the expected $2.1 trillion global protein market and for meat and dairy alternatives to outpace conventional products.

Rising meat costs are part of that equation. “When meat prices fluctuate, plant-based alternatives become a viable alternative, because people are more comfortable using those products than they have ever been in the past,” says Jennifer Bartashus, report author and Senior Analyst, Retail Staples & Packaged Food at Bloomberg Intelligence.

Fort Lauderdale, Florida, resident Christopher Penner told LIVEKINDLY that he’s eliminating meat three to four days per week for health and environmental reasons. Flexitarians, like Penner—people who eat a primarily vegetarian diet but occasionally eat meat and fish—make up about one-third of the U.S. population, according to the Good Food Institute.

In a recent Gallup survey of 2,431 American adults, nearly one in four Americans reported consuming less meat over the past year. Seventy percent of whom cited health concerns as their primary motivator, while 49 percent claimed environmental concerns were driving them to cut back on meat.

Reducing meat consumption is essential for both personal and planetary health. The Food and Agriculture Organization of the United Nations describes animal agriculture as “one of the top two or three most significant contributors to the most serious environmental problems, at every scale local to global.”

The power of the meat monopolies

While consumers have been paying more for groceries and ranchers are spending more to raise meat without earning any extra money, Tyson, JBS, National Beef and Cargill—the giant meat conglomerates known as the Big 4—have been raking in record profits, rewarding shareholders with huge dividends and buybacks. In 2020, JBS offered $2.3 billion in dividends and buybacks and has proposed even higher payments for 2021. For fiscal year 2021, Tyson also raised dividends, up $6 million, spending $477 million on dividends in the three quarters ending in July 2021.

“We see consumers believing cattle farmers and ranchers are making windfall profits,” says Bill Bullard, CEO of Ranchers-Cattlemen Action Legal Fund United Stockgrowers of America (R-CALF USA). “That’s not at all what is happening—meatpackers are capturing that share of consumer dollars in the form of record margins.”

But how did four companies come to control between around 55 to 85 percent of the market, according to the U.S. Department of Agriculture data? The answer is half a century of consolidation, corruption and illegal price fixing, and the history is a dirty trail of lobbying and antitrust failure.

In poultry, the top four processing firms controlled 35 percent of the market in 1986, compared to 54 percent today. That’s like going to the shoe store and seeing that out of 200 pairs of shoes, over 100 are Nike. So how did this happen?

This large-scale consolidation has been the result of 40 shocking years of Republican and Democratic failure to enforce antitrust laws. It has led to the largest of these agribusinesses exerting astounding economic and political power over farmers, workers, consumers and politicians, as well as regulatory agencies, including the United States Department of Agriculture and the Department of Justice.

There was supposed to be a hero to stop all this from happening, but it’s been torn down by the courts. Called The 1921 Packers & Stockyards Act (P&S Act), which created the USDA Packers and Stockyards Administration (now the Grain Inspection, Packers and Stockyards Administration also known as GIPSA), was supposed to police large meat packers for anti-competitive actions and monopolization. However, over the past 20 years, several adverse court rulings have gutted its protections for farmers.

In late 2018, the Trump Administration dissolved GIPSA entirely as an independent agency, passing off its duties to the Agricultural Marketing Services agency, which many claim is notoriously agribusiness-friendly.

Then in 2019, a series of lawsuits were brought by grocers, independent ranchers and others against the nation’s four largest beef packers alleging that the Big 4 had been engaging in a price-fixing conspiracy to inflate beef prices. So why did it take the Biden administration until September 2021 to react?

The struggle to change the meatpacking industry

Last spring, President Donald Trump asked the Department of Justice to investigate allegations that U.S. beef and pork producers were violating federal antitrust laws, as grocery store prices were skyrocketing, and processing plants were shuttering due to the pandemic.

After more than a year of “no public results” and no reassurance that an investigation was still underway, Sen. John Thune (R-S. D.) and a dozen other senators and members of Congress sent a letter to Attorney General Merrick Garland requesting that the DOJ continue to investigate and publicly announce its findings.

In late July, a federal grand jury in Denver, Colorado, charged four executives and their companies “in a nationwide conspiracy to fix prices and rig bids for broiler chicken products.”

On Tuesday, the Minnesota Federal Court denied the packers’ motion to dismiss one of the class-action antitrust lawsuits originally filed in April 2019, finding that the plaintiffs (including R-CALF USA) were breaking antitrust laws. The ruling showed that meat packers actively worked to reduce the costs of cattle feed while simultaneously increasing the sales price of beef to proceed with the case.

As meat prices have risen, sales have slumped. At the start of the summer, sales of meat at U.S. grocery stores were down by more than 12 percent from the previous year.

JBS, one of the Big Four, has been implicated in illegal deforestation in the Amazon. While it and other big agricultural companies say they will boycott farms involved in illegal deforestation and rural conflicts, an audit by federal prosecutors in Brazil found that 19 percent of the cattle purchased by JBS in 2016 had “evidence of irregularities,” meaning they couldn’t say whether or not the animals had come from illegally-deforested sections of the Amazon due to a lack of supply chain transparency. And in 2017, JBS was fined for buying cattle farmed in illegally-deforested areas in Pará.

Both JBS and National Beef Packing are Brazilian-owned or -controlled. Not only did they and other meatpacking monopolies manage to get the Obama Administration to roll back country of origin labeling for beef and pork—leading to a near 50 percent decline in the value of U.S. calves—but the meat they import from Brazil or other countries gets to be labeled  “Product of U.S.A.” through a regulatory loophole that allows imported meats that pass through a USDA-inspected plant to get that coveted certification.

These sorts of reasons and studies are what drove Penner, an avid SCUBA diver to cut back on meat. But he adds,”The savings was a noticeable perk.”

As part of the announcement, the Biden-Harris administration vow to crack down on illegal price fixing, enforce antitrust laws, and bring more transparency to the entire meat-processing industry.

This includes many overhauls at the USDA. The agency is still conducting an ongoing joint investigation with the DOJ into price-fixing in the chicken-processing industry that has already yielded a $107 million guilty plea by Pilgrim’s Pride. The USDA has also announced a more robust Packers and Stockyards Act enforcement policy with new efforts to strengthen rules to  prevent meat-processors from using their sheer size to abuse farmers and ranchers. The agency is creating new market reports on what beef-processors pay and new rules designed to ensure consumers get what they pay for when meat is labeled “Product of USA” in an attempt to make the entire industry fairer and more transparent to farmers and consumers. And the USDA will invest $500 million in American Rescue Plan Act funds to support new meat and poultry processors that can compete with the big guys through expanding local and regional processing capacity.

None of this needs approval from Congress, but to change an entrenched industry, Biden and his appointees will need to pursue these time-consuming investigations and prosecutions. Meanwhile, vegan meat giants like Impossible Foods and Beyond Burger are poised for explosive growth by 2030, continuing to scale up production and distribution in expectation of wooing more cash-strapped flexitarian consumers to their sides.

Bread Flour vs Self Rising Flour – What’s the Difference?