How This Multivitamin For Vegans Can Improve Your Health 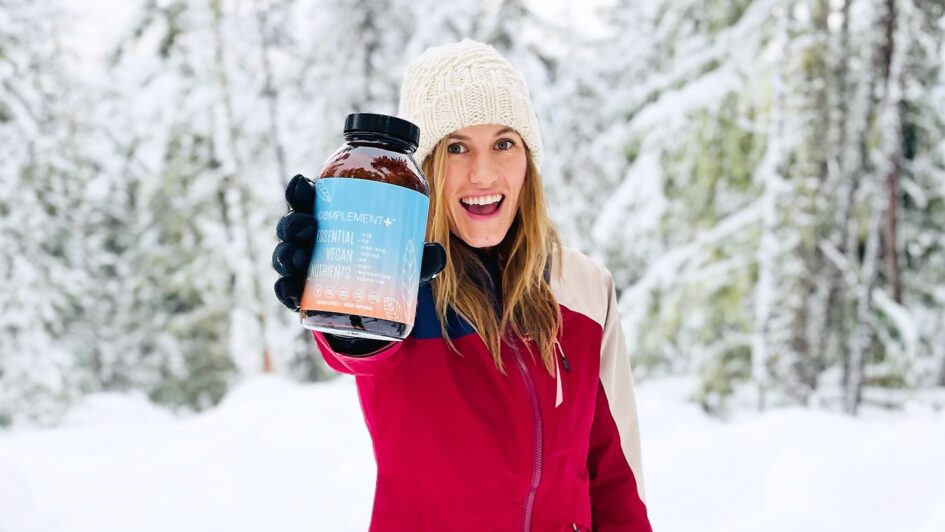 If you’re vegan or sometimes plant-based, maybe you’re worried that you’re not getting the right nutrients. You probably already know that you need a vitamin B12 supplement, but the fact is, there’s more to it than that. You can actually get what you need all in one place: Complement Essential, a multivitamin designed for vegans, plant-based eaters, and anyone who’s on the road there.

If you’re the latter, know that you don’t have to make this major transition all in one go. When Olympian Julia Murray started cutting back on animal products in her diet six years ago, she didn’t realize that she’d be ditching them for good. The now-retired Canadian silver-medalist freestyle skier was studying to become a holistic nutritionist. It was then that she learned that eating more fruits and vegetables could help reduce chronic inflammation—a problem with which she was all-too-familiar.

“I had just come out of a couple of big knee surgeries,” says Murray. One was for a blown-out ACL that she competed on during the 2010 Olympics; the other was for the ACL injury and cartilage damage that she powered through to win the World Champ Silver Medal at the FIS World Championships the season after. “My knee was inflamed in the mornings, so the anti-inflammatory benefits of plant-based food is what first piqued my interest.”

Murray approached her lifestyle change one step at a time. “Instead of thinking of it as cutting out, I thought of it as adding in more plants to help with my knee,” she says.

She started by eliminating beef from her diet, then slowly moved on to other products—chicken, eggs, cheese, milk, and more. One pillar led to another, and she became more connected to animal agriculture’s impact on our health, then the environment, and finally the animals. Perfection or labels weren’t top-of-mind during her year of transitioning to a plant-based diet.

She may be an Olympian, but incremental change is an approach that many of us can relate to. There’s no perfect way to make lasting change; getting started is what matters. “I always tell people, it’s about progress, not perfection,” says Murray.

Progress comes in many forms: from eliminating one type of food at a time, to adding a multivitamin to your daily routine, to easing yourself into a new diet. When you’re eating plant-based, responsible supplementation is a smart way to ensure your body gets all the right nutrients.

Complement Essential is a vegan multivitamin specifically designed to fill the nutritional gaps commonly found in plant-based eaters. This is because it contains omega-3s, minerals, and nutrients that work together to help improve overall health — from regulating metabolism to improving sleep — and gives you only what you need, without megadoses of extra nutrients you’re already getting from your healthy plant-based diet.

“No matter what dietary pattern you’re following, you could be deficient in different things,” explains Phoenix-based registered dietitian Rhyan Geiger. “It’s more about the quantity of the food, not the quality. Of course, you still want to eat fruits and vegetables, nuts, legumes—as many whole, plant-based options as possible. But because of the way that they’re grown and how they’re processed, you could be lacking in nutrients no matter what.”

Murray (ever the overachiever!) is now a certified plant-based chef and a holistic nutritionist, with a passion for helping people make those incremental, but meaningful changes.

She encourages easy swaps such as plant-based protein for meat, focuses on nutrition, and loving what you eat. “It’s about abundance over deprivation,” she says. “In the beginning, I was just going with the flow and consciously choosing fewer animal products with every meal.” She adds, with a laugh: “When I went out, I would still order nachos with cheese, because I didn’t want to be the ‘weird one,” you know? Cheese was the last thing to go.”

Going plant-based is a huge leap towards healthy living. Still, even if you’re eating a rainbow of fruits, vegetables, grains, and legumes, your body could be missing out on some very important nutrients. “There is no ‘perfect diet’ that depends only on food sources,” says Joel Kahn, MD, FACC, and vegan of more than 43 years. “That’s not a criticism, but a reality shared with the Mediterranean, DASH, and other science-backed diet programs.”

Vitamin B12: Produced by soil bacteria and found naturally in animal products, the human body can’t make vitamin B12 on its own. It supports red blood cell formation, neurological function, and DNA synthesis. Complement Essential contains methylcobalamin and adenosylcobalamin, the easiest forms for the body to absorb.

Fact: “Even if you’re eating animal products, you likely need to supplement B12 because there’s not enough present in the animals’ food due to lower soil quality,” says Geiger.

DHA and EPA Omega-3s: Sourced from algae grown in solar-powered ponds, so it’s highly renewable and doesn’t come with the sludge and microplastics of oceans, these essential types of omega-3s support brain and cholesterol health, nervous system regulation, and improved energy levels. The omega-3s in Complement Essential are actually better absorbed than fish oil.

Vitamin D3: Sorry, sunshine. Despite spending time outdoors (and whether you wear clothing), you may be lacking in Vitamin D, which comes in two forms: D2 and D3. Complement Essential contains the more easily absorbed Vitamin D3 called Vitashine, which is sourced from lichen (a symbiotic life form composed of a fungus and algae that grows on trees).

Zinc: Supports healthy skin, nails, eyesight, and immune system as well as the body’s ability to heal wounds. Complement Essential uses picolinate, the easiest form for the body to absorb.

Geiger notes that unless you’re eating seaweed or iodized salt, it’s possible that you’re not getting enough iodine in your diet.

Vitamin K2: Helps maintain a strong heart and bones, and it helps with blood clotting. It’s sourced from the bacteria menaquinone, which is found in nattō, a Japanese breakfast food made from fermented soybeans.

Selenium: Plays a key role in normal thyroid function and metabolism. It’s naturally occurring in plant foods such as Brazil nuts. But poor soil quality where these crops grow often means that many of these foods don’t contain enough selenium.

Magnesium: Supports metabolism, energy levels, mood, and heart health. It increases iodine’s role in thyroid function. Complement Essential contains magnesium citrate, which is the easiest form for the body to absorb. Magnesium is found in foods such as greens, beans, and whole grains, but soil depletion has diminished its presence.

Kind to your body, kind to the planet

Be sure to consult with your doctor when adding a multivitamin to your diet. And, if you’re curious about what you’re missing, ask your primary care provider to run a blood panel. “If you’re vegan, ask them to check your vitamin B12 and folate levels because I’ve seen instances where it’s not included in the blood test,” Geiger says.

Not only is Complement Essential made with nutrients that are harder to get from food, but the brand also sources its own ingredients, which are triple-tested: once for quality, again for purity (once the final batch has been made), and finally, by a third party laboratory.

The company is mindful of each detail. The supplement capsules are free from fillers and artificial colors. In fact, the oil used contains a blend of compounds such as carotenoids, omega-7, and chlorophyll, which gives it a naturally dark green color. They are already packaged in sustainable glass bottles, but Complement is in the process of transitioning to a completely biodegradable, compostable pouch by early 2022.

Each purchase also supports three good causes: carbon offsets through Pachama, tree-planting through One Tree Planted, and rescued animals through Living With Harmony.

For anyone who’s in the process of integrating more plants into their diet, Murray says, “It’s important to not be hard on yourself and to draw inspiration from your own actions, those baby steps that you achieve. It’s about taking little steps at a time toward a bigger picture.”

Those small steps are worth celebrating. Going plant-based comes with a lot of positives, for the planet, those who inhabit it, and for your health, too. But it’s important to ensure that you’re taking care of that last part in order to thrive, and Complement Essential can help bring that peace of mind that you’re not missing out on important nutrients. Visit Complement’s website to learn more.

How This Company Is Rivalling Airbnb With Travel Platform For Vegans

We Checked Out What Coffee #1 Had For Vegans, And This Is What We Found