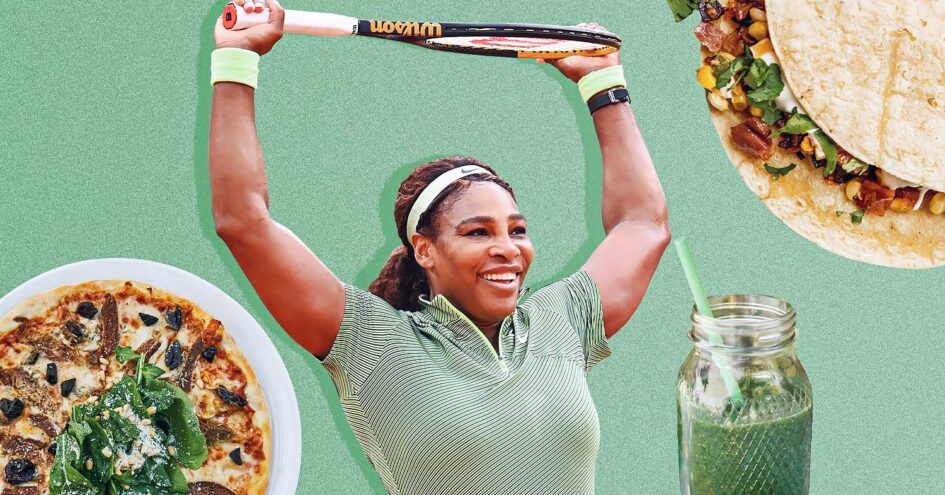 Serena Williams isn’t a strict vegan, but she doesn’t like beef and tries to eat plant-based as much as possible. The tennis champion first decided to give a vegan diet a try around a decade ago, thanks to her sister, Venus Williams.

As Serena told Bon Appetit in 2013, she cleaned up her diet and started eating vegan after Venus was diagnosed with an immune system disorder called Sjogren’s syndrome.

As one of the most talented athletes in the world, with 39 Grand Slam titles to her name, Serena is very conscious of what she puts in her body. As the Michigan native has discovered, she feels her best when she sticks to a nutritious and largely meat-free eating regimen.

“My philosophy is eat to live. Don’t live to eat,” she told Women’s Health in August 2021. “I want to have a healthy lifestyle and, so you know, [I’m eating] a lot of greens and mostly plant-based lately, just super healthy stuff.”

Even though Serena likely has a hand (or two) in the kitchen, she still enjoys throwing together many of her own (mostly vegan) meals. “I love cooking,” she explained. “I don’t have a ton of time to do it often, but I love cooking and it’s just kind of relaxing for me.”

What does Serena Williams Eat?

When it comes to vegan food, Serena is partial to plant-based versions of tasty staples such as tacos and pizza, which are often both topped with walnut meat. While she certainly enjoys food, as an elite athlete she views it as fuel more than anything else.

“You need [food] to survive,” she told Women’s Health. “And that’s very hard to live by, because I definitely love to snack, but this is what I want. These are my goals.”

Serena occasionally talks about some of her favorite vegan dishes and recipes in various interviews. She also shares some of her meat-free creations on social media, particularly on her Instagram. Serena is fond of popular dishes that are easy to make, and also loves hearty vegan smoothies and dishes that use plant-based meat substitutes. Here are some of Serena Williams’ favorite vegan recipes.

One of Serena’s favorite meals, courtesy of Von der Pool, is her “Grand Slammin’ Tacos” which include vegan “meat” made out of nuts mixed with a flavorful seasoning blend that features cumin, paprika, and more.

Serena has even made the Mexican staple on her own, as she shared with USA Today in June 2013. “I used different nuts and it was delicious. I used a soft shell taco, cashews, walnuts, and sunflower seeds,” she said at the time. “I put them in a mixer. You soak the nuts overnight and after you mix them you put them in the dehydrator. After that, I add seasoning, so it actually tastes like meat.”

To ensure that Serena was getting the nutrients she needed to succeed on the court, Von der Pool whipped up nutritious vegan smoothies and tossed plenty of hearty veggies in the drinks as a way to “trick” the tennis pro, though they took a little getting used to.

“When I first started, Serena would pour out the green juices into the plants and act like she was drinking it. Serena is so funny, she’s the absolute best, but she’s just also like a mischievous child,” Von der Pool previously told LIVEKINDLY.

More recently, Serena has taken to making nutritious smoothies on her own. During that chat with Bon Appétit, the athlete noted that her refrigerator is packed with vegan smoothie staples such as “coconut water, Gatorade (my favorite!), cucumbers, mint, kale, vegetables, ginger, and wheatgrass.” Yum!

Per Women’s Health, Serena’s mid-day meal usually involves greens and protein. “I had a bean burger the other day,” she told the publication, adding that she instead opted to eat a “gluten-free bean burrito,” days later.

While it’s clear that Serena has a penchant for Mexican food (uh, who doesn’t?) her Mexican dishes won’t ever include beef or avocado, as she’s never really liked either ingredient.

Before a game, Serena typically stays away from any meat or animal products, but she still manages to have a healthy and balanced meal. “I usually like to have lots of greens before my match and then fruit actually, and a little carbs and some sort of a protein,” she shared. “So I try to knock them [the food groups] all out in one.”

In one of her first-ever Instagram posts, Serena proved she can throw together a delectable vegan meal all on her own. “Mexican vegan pizza I made from scratch,” she captioned a snapshot of two pizza pies fresh from the oven. “Meat is actually nut-based.”

By the looks of it, the pizzas were also topped with tomato sauce, vegan cheese shreds, and some mushrooms.

Vegan fish dishes aren’t yet as popular as meals made with plant-based meat substitutes, but that doesn’t mean you can’t make a fish dish without using any real fish. In fact,  Von der Pool recalled she often threw together vegan fish dishes for Serena such as sushi and a plant-based tuna wrap made with walnuts.