How to Get Nail Artist Sigourney Nuñez’s Sugar Skull Nails 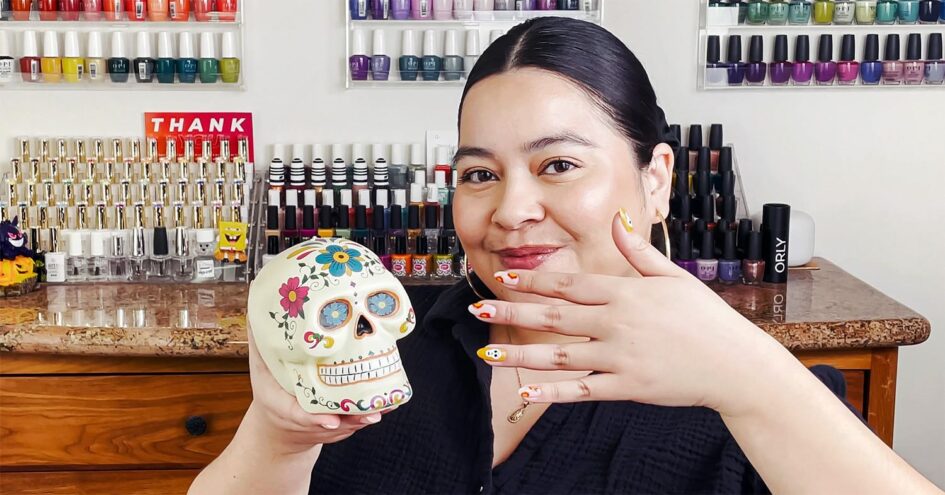 Día de los Muertos, which translates to Day of the Dead, is a Mexican celebration that honors the spirits of those that have passed, from family ancestors to loved ones that have died more recently. But it’s anything but morbid. The holiday, which takes place from November 1 through November 2, is about color, joy, and the celebration of life.

Often marked by parades and festivities at home, Día de los Muertos has its roots in Aztec beliefs. While it has evolved over time, due to Spanish colonization and modern popular culture, the crux of Día de los Muertos remains. The holiday is centered around the idea that the dead are not separate from the living, that death is an integral and important part of life.

To symbolize Día de los Muertos in nail art, Latinx nail artist Sigourney Nuñez has created a vibrant manicure, which represents both marigolds and calaveras (sugar skulls), two meaningful and renowned symbols of the holiday. And here’s why.

During Día de los Muertos, it’s believed that spirits come back to visit their families. To help guide them, families will often place orange Mexican marigolds on an ofrenda (an altar) in their home. It’s thought that the scent and the bright color of the marigolds, believed by the Aztecs to be a sacred flower, will help to lead the spirits to the altar. Often, personal belongings or a photograph of the person who has passed are placed alongside the marigolds, and there are also traditional food items, including candied pumpkin, tamales, and calaveras (sugar skulls).

Calaveras are arguably the most well-known symbol of Día de los Muertos, often depicted in costumes or face paint. They have been produced since the 15th century, but the symbol we see today is thought to have been inspired by the satirical work of José Guadalupe Posada, a Mexican illustrator, who lived in the early 20th century. Skull imagery has been prominent in Mexican culture for centuries, from the Aztecs through colonization to now.

How to get Día de los Muertos nails

First, apply a layer of clear base coat

After the base coat has dried, apply a layer of color

On one nail, use a detail brush to draw a calaveras, using a dotting tool for the eyes

On another nail, use a dotting tool with deep orange and yellow to create a marigold

When your designs are dry, finish with a layer of top coat

Sit back and admire your handiwork!

How to Nail a Holiday Dinner Party Without Meat—or Alcohol