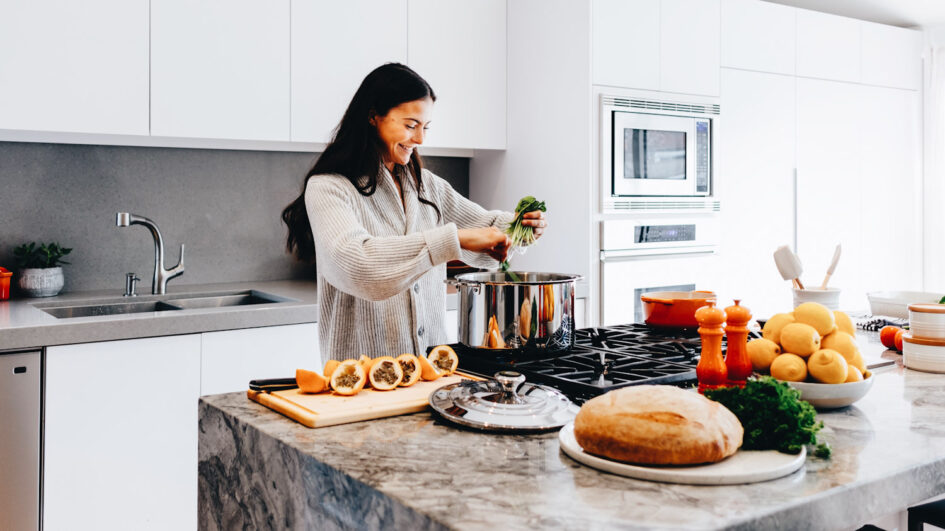 Fall will be here before we know it and one of the best things about the season is the food. It’s time for trips to farm stands, where you can buy freshly-roasted acorn squash halves, pick pumpkins, and drink apple cider brought in from upstate. Eating seasonally has its benefits. Not only does food taste better when it’s in season, but perhaps unexpectedly, eating seasonally could also help keep your gut healthy.

Why is gut health so important?

First and foremost, why does gut health matter? Our bodies are home to trillions of bacteria which are collectively known as the microbiome. While bacteria might raise some alarms and conjure up thoughts of a dirty kitchen counter, a lot of that bacteria is good. And there is a lot of it. We carry about 40 trillion bacterial cells in our body and only 30 trillion human cells and they reside mainly in our intestines and on our skin. And, the thousands of species of bacteria that live in our intestines are part of our gut microbiome.

The majority of these microorganisms—“good” bacteria—are extremely important to our health and have been since the early days of humankind. Much of our immune system resides in our gut. So, how you take care of it can also impact how often you get sick during flu season, and all year round. This is because a healthy gut bacteria population typically means a strong mucosa (gut lining), which helps keep harmful microbes at bay.

The more diverse the bacteria living in your gut are, the better, and the diversity of the microbes can change depending on what you eat, where you live, if you have companion animals, how much you exercise, and more. And, it turns out, eating seasonally could lead to better gut health. (Hello, fall. Bring me to the apple orchard posthaste.)

Wait, so seasonal food can help keep your gut healthy?

Seasonal eating means eating foods that are at their peak, typically around their harvest time. To get the best sense of what’s in season, visit your local farmers’ market. You’ll likely find an abundance of pumpkins and apples in fall; brussels sprouts and pears (or the rare pomegranate) in winter; peas, radishes, and rhubarb in spring, and corn, zucchini, berries, and stone fruits in summer.

A 2017 study of the Hadza people (a group of hunter-gatherers in Tanzania) found that their gut microbiome fluctuates seasonally. This is because their diet primarily consists of seasonal food found in the forest. Researchers compared the microbiome of the Hadza people to hunter-gatherer groups in other countries, including Venezuela and Peru. Interestingly, the traditional hunter-gatherer groups had more diverse microbiomes in the wet seasons, when berries are available, compared to the dry seasons when their diets were more meat-heavy.

Lawrence David, an associate professor at Duke University who studies the microbiome, told NPR that this study “suggests the shifts in the microbiome seen in industrialized nations might not be permanent — that they might be reversible by changes in people’s diets.”

In other words, we can potentially improve our gut health by changing how we eat.

It’s true that you can eat seasonally on a Western diet. But, sad to say, many of us aren’t even eating enough fruits and vegetables. Compared to the Hadza from the study, the average Western diet is low in dietary fiber and high in saturated fats and refined sugars. All of this can lead to a less diverse microbiome in one way or another.

Long story short: eat your fruits and vegetables and when possible, seasonally. Not only does food taste better when it’s in season, but it’s also more nutrient-dense because food forced to ripen out of season (a common industry practice) has less time to absorb vitamins and minerals. Seasonal produce is also often cheaper, and if you’re lucky enough to live close to a farmer’s market, then you’re buying food that has a lower carbon footprint compared to produce shipped across national and state borders.

So take a page from the Hadza playbook and try to change your diet in line with the seasons, emphasizing seasonal produce and local food to protect your microbes and give them the support they need to really thrive. Here’s how to eat seasonally to help keep your gut health in fall:

Prebiotics are a type of dietary fiber that feeds the good bacteria in your gut and helps your digestive system work better. Our bodies cannot digest this fiber. Instead, they move into our lower digestive tract where they help feed our microbiome.

Many foods are considered prebiotics. In fall, opt for seasonal produce such as apples, Jerusalem artichoke, and cabbage. Choose organic produce if it’s accessible to you. One study revealed that organic produce contains more diverse bacteria than its conventional counterpart.  Onions, garlic, and shallots are also considered prebiotics as are hearty legumes that make for warming stews and curries, like chickpeas, lentils, and kidney beans. Add fiber-rich carbs to your meal by building a recipe around prebiotic grain such as oats (try our easy overnight cinnamon apple oatmeal) and barley.

You can also get prebiotics through supplements.

The process of fermentation has been used by humans for thousands of years and the foods are incredibly varied. Fermented foods, which are loaded with good, probiotic bacteria, are easier to digest. They also make it easier for our bodies to absorb nutrients. Because they contain probiotics, fermented foods are also good for our gut.

Finding fermented food is easy. Sauerkraut, sourdough bread, and dairy-free yogurt are among the most common types that you’ll find in supermarkets. And probiotic drinks like kombucha are rising in popularity. You might also find kimchi, miso, and tempeh.

But if you have the bandwidth, it’s worth it to make your own.

One study found that eating a lot of refined sugar can result in fewer species of good bacteria living in your gut. Over time, this can cause inflammation. This doesn’t mean you have to deny yourself the occasional indulgence in something sweet. Just be mindful of sugar intake. The Dietary Guidelines for Americans for 2020 to 2025 recommends that added sugars should contribute less than 10 percent of your daily caloric intake.

Get those whole grains

Whole grains are the grains that have all three parts intact: the endosperm, the germ, and the bran. This is in contrast to refined grains, which only have the endosperm. Whole grains include rice, barley, oats, teff, fonio, buckwheat, and quinoa. Whole grain noodles and pasta also often contain servings of whole grains. Studies have shown that people who regularly consume whole grains have a more diverse gut microbiome.

As the weather changes, your exercise routine might, too. (Farewell to the outdoor runner that I’ll never be.) But, sticking to a regular workout could also help your gut. A review of studies found that low-intensity exercise (physical activity that keeps your heart rate up for at least 30 minutes). Even being outdoors may enrich microbial diversity and reduce inflammation. Pick a routine that’s something you enjoy, whether that’s cycling, jogging, hiking, yoga, lifting weights, or whatever gets you moving.

Look And Feel Healthy Inside And Out