How to Quit Caffeine: An Imperfect Guide, Plus 5 Coffee Alternatives 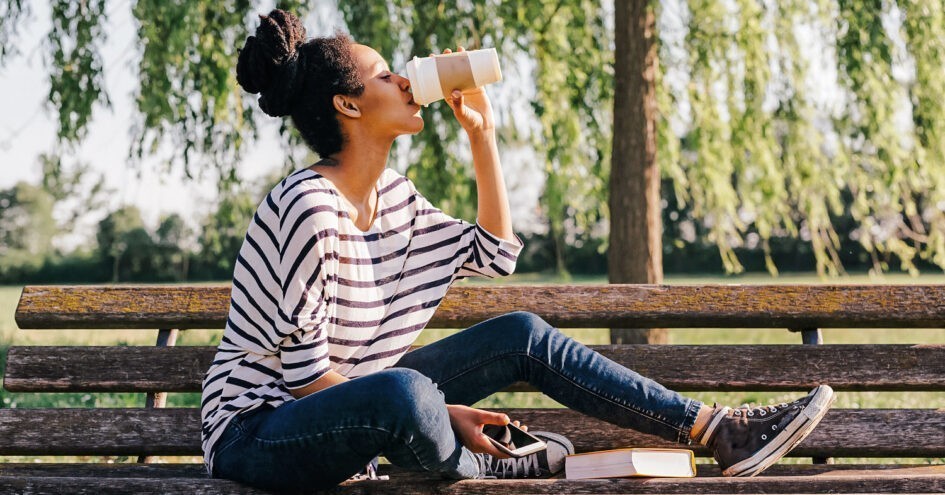 Caffeine is literally my love language. (And tacos … definitely tacos.) The euphoric feeling I get when I pull into my neighborhood Starbucks drive-through is simply unexplainable. Venti iced salted caramel mocha with coconut milk, substitute caramel syrup for the caramel sauce, and hold the whip, please! (Do they make caffeine I.V. drips? Asking for a friend.)

On average, I consume two (okay, three) cups of coffee in the morning and a Red Bull around lunchtime. The flip side of this is that I have enough energy to power through my workday and the evening clean through into the next morning. Basically, I can’t sleep. And don’t even get me started about my caffeine-induced jitters.

One night, after laying in bed—wide awake—until 4 a.m., I decided to see if I could go a few days without caffeine (lololhelpmeplease). The next day, I put my plan into action. I lasted all of about three hours before I found myself making a batch of coffee. (I blame muscle memory.) We’re going to need some reinforcements! After a quick chat with my friend, Google, I found a variety of vegan coffee alternatives. But, just how effective are they? Don’t worry, I decided to go a week sans caffeine and tried them. More on which vegan caffeine replacements won, in a bit.

Is caffeine good for you? It’s complicated.

Caffeine is good for helping you power through your 9 a.m. Zoom call and 84 work emails on a Monday morning. But just how good is it for you health-wise?

A natural stimulant, caffeine is a psychoactive substance that is derived from a variety of plant species, including coffee beans, cacao seeds, and tea leaves. When consumed in moderation, caffeine can help increase alertness, concentration, and energy. (According to the Dietary Guidelines for Americans, a moderate amount of coffee is approximately 3 to 5 cups a day—I know, I was shocked, too—or 400 milligrams of caffeine.)

Your fave morning pick-me-up isn’t without its health benefits. According to Harvard T.H. Chan School of Public Health, the stimulant may help reduce the growth and spread of certain cancers and reduce inflammation. And while caffeine can increase blood sugar levels in the short term, when consumed over the long term, studies show it may lower the risk of type 2 diabetes.

The health benefits don’t stop there. Sips coffee. Consuming coffee regularly may also reduce the risk of heart disease and stroke. A 2009 Nurses’ Health Study found that regular coffee consumption amongst women lowered the risk of stroke by 20 percent compared to non-coffee drinkers.

But for those sensitive to caffeine, or those who consume it in excess, negative effects can run the gamut from anxiety and irritability to upset stomach, restlessness, and insomnia. (The dark circles under my eyes can certainly attest to the latter.)

5 vegan caffeine alternatives to get you through the day

So, I decided to take a break from caffeine for a week. (It’s not you, caffeine—it’s me.) After my initial blunder, I Amazon Primed in some caffeine-free reinforcements: lion’s mane elixir, herbal tea, chai rooibos tea, and two herbal coffees.

It started out easy enough: Day one was a (semi) breeze. But, by day two, I was grappling with bouts of irritability, pesky headaches, and poor concentration. Around day four, my caffeine withdrawals began to ease up. And while none of my caffeine-free substitutes gave me the same jolt that a caffeinated beverage would, they definitely helped to subdue my moodiness and give me a much-needed boost to get me through my workday. They also allowed me to continue my morning ritual of sitting down with an iced or hot drink before I start my day.

If you’re tired of the jitters, you could also opt for decaffeinated coffees and teas. Although not completely caffeine-free, they’re a great option for those looking to cut back on their caffeine intake. I’m a huge fan of Laird Superfood’s decaf coffee. The brand’s decaffeinated process removes 99.9 percent of caffeine. And if you’re looking to reduce your dependence on caffeine-laden beverages altogether, here are five vegan caffeine alternatives (I tried ‘em!).

Trust me: Your mornings just got better. In addition to its anti-inflammatory and immune-boosting properties, lion’s mane is known for its ability to support overall brain function, including improving focus and memory and boosting mood, although more studies are needed. You can add this elixir to your coffee or tea for an extra energy boost. Or, if you’re going caffeine-free, simply add it to hot water. Featuring an earthy taste similar to that of a herbal tea, this elixir certainly delivers in the focus and energy department. I blended it straight into my green smoothie because I was worried I wouldn’t like the taste. Once I downed this elixir, I was able to sift through a hefty load of Monday emails with ease.

For a helpful kick to get you through the morning, try Tazo’s spicy ginger herbal tea. Make it hot or chilled to replace your morning cup of joe (I opted to serve it on ice because #heatwave). If you’re not about the spice, you may want to skip this caffeine alternative, but the spicy ginger did help do the trick for getting my mental juices flowing. In addition to ginger, this herbal infusion features organic orange peel, green rooibos, and lemon verbena.

Say goodbye to caffeinated jitters and hello to calm energy with this herbal coffee alternative. It features 12 different herbs, seven adaptogens, and two types of mushrooms—including ashwagandha, roasted chicory, dandelion roots, cinnamon, chaga, and reishi extract, respectively. Ashwagandha and chaga, in particular, are known for their stimulating properties. The herbal beverage definitely gave me an energy boost and helped to temporarily quell some of my caffeine withdrawals, including my most disagreeable countenance. The taste wasn’t as bitter as I expected; it had earthy notes with a hint of cinnamon—yum! Serve it hot or cold and pour in your favorite non-dairy creamer.

Yogi Tea churns out powerful teas known for their curative effects, including supporting overall digestive function and joint health. This caffeine-free herbal supplement features the likes of rooibos, and traditional Ayurvedic flavors of cinnamon, cardamom, and clove in compostable tea bags. The cinnamon was sweetly stimulating to me, while the aroma of the clove was strong enough to wake me up. Equal parts spicy and sweet, this chai rooibos will give you the boost you need to power through your afternoon slump. (Bye-bye energy drinks!)

Okay, this coffee alternative is like whoa. The brand carries a number of herbal coffees and teas that are naturally caffeine-free. This herbal medium roast coffee features a blend of creamy caramel with roasted dandelion, chicory roots, dates, almonds, and figs for added sweetness. And. it. is. dang. good. (So good that I made two cups!) It gave me all the same feels as a cup of coffee, plus energy to boot! I was able to power through several news pieces, sans grumpiness and shaky hands. You’re definitely going to want to stock up.

And just like that, I made it through a week of no caffeine. I’m not going to lie: It was challenging. Why must caffeine be so dang addictive?! The substitutes were a healthier alternative for my sugar-laden Red Bulls, and they helped to mitigate my caffeine cravings and withdrawals quite nicely.

Unfortunately, the day after my experiment ended I threw myself back into my coveted caffeine coffees and Red Bulls, full steam ahead. However, since then, I have started to cut back and have begun swapping out a few morning cups of Joe each week for Teeccino. (I can’t seem to kick my insatiable Red Bull addiction … lolsob.) But for those eager to reduce their caffeine intake, just remember to listen to your body. Eventually, you’ll find the perfect blend for mitigating your caffeine withdrawals while still maintaining your sanity. May the froth be with you.

LIVEKINDLY is here to help you navigate the growing marketplace of sustainable products that promote a kinder planet. All of our selections are curated by the editorial team. If you buy something we link to on our site, LIVEKINDLY may earn a commission.