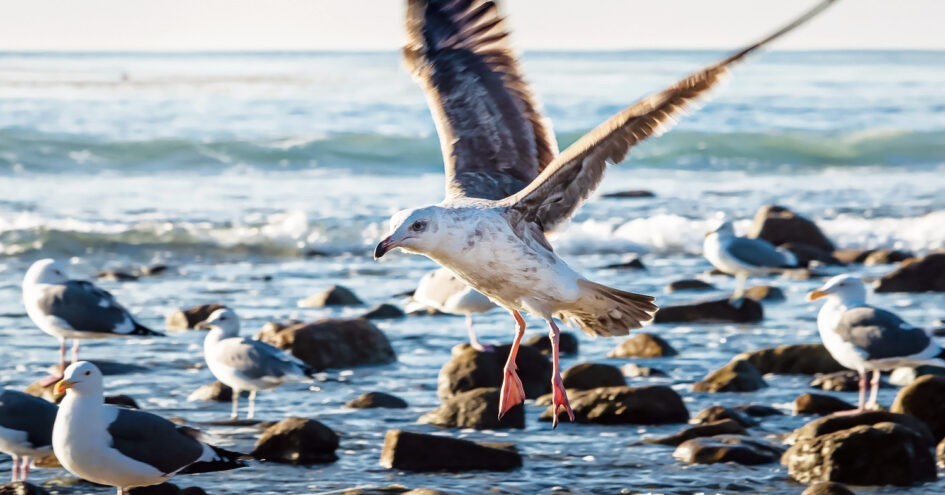 The environmental impact of the Huntington Beach oil spill will be felt for years to come.

Between October 1 and 2, a pipeline leak released around 126,000 gallons (just under 573,000 liters) of highly viscous liquid petroleum into the ocean off the coast of Huntington Beach in Southern California. The resultant pollution has washed over miles of the state’s most popular beaches, protected wetlands, and wildlife habitats. Dead fish, birds, and oily residue have since washed up in the so-called Surf City of the U.S., blackening the sand and waves.

It only takes a tiny quantity of oil to compromise seabirds’ feathers, and the area is a critical link for migratory birds expected to pass through in the coming weeks. Pollution has since been detected as far south as Laguna Beach, several miles down the coast, and one scientist said that oil embedded in the delicate marshlands “is there pretty much forever.”

Since Saturday, there have been renewed calls for everything from a complete ban on offshore drilling to improved federal rules to strengthen the detection of leaks. We sat down with two experts in their respective fields to discuss the spill itself, the contributing factors that led to it, and what can be done to make sure this doesn’t happen once again.

Sejal Choksi-Chugh, Executive Director at environmental advocacy nonprofit Baykeeper, also serves on the Board of Directors for California Coastkeeper Alliance and directs the Waterkeeper Alliance—a coalition of grassroots organizations fighting for clean water. In 2019, Baykeeper sponsored a law (AB 936) specifically to strengthen the regulation surrounding heavy oil production and transportation in California.

David Valentine, Professor of Earth Science and Biology at UC Santa Barbara, worked on a review paper published last year that analyzed ten years of data following the Deepwater Horizon disaster (the single largest marine oil spill in the history of the industry). Valentine is also the founding director of the Marine Science program at the College of Creative Studies.

How long are the effects of an oil spill usually measurable in the surrounding environment?

Choksi-Chugh: “The lingering effects of a spill really depend on the volume and type of oil spilled. Lighter oils will stay on the surface of the water and start to dissipate with sun and exposure to water currents within a few hours. Though some of the toxic chemical components and surfactant additives of that oil may linger in the environment for longer.

Heavier oils, like tar sands, can be particularly long-lasting because they can sink into the sediment. Tar sands oil was still present in the Kalamazoo River in Michigan years after a major spill despite an extensive cleanup effort.”

Valentine: “This really depends on the environment. The most susceptible areas for this circumstance are probably the coastal wetlands because oil can get in and get stuck. When that happens the effects can persist for years. For beaches and open ocean, the oil tends to spread rapidly and the effects become more subtle and difficult to measure over time.”

Are oil spills an inevitable part of fossil fuel usage?

Choksi-Chugh: “Yes. As long as we rely on fossil fuels, oil spills, leaks, and other accidents will continue to occur. It’s not a matter of if, but when.”

Valentine: “History tells us that spills are inevitable, although there remains plenty of opportunity to reduce the frequency, volume, and impact.”

How should regional and federal governments prevent and respond to these disasters?

Choksi-Chugh: “The Huntington Beach spill is illustrative of a lot of the problems that exist in oil spill prevention. The company that was likely responsible for the spill has a long history of pollution violations. Companies like that shouldn’t be eligible for drilling contracts in the first place. It also sounds like the company’s activities weren’t being properly monitored in the lead-up to the spill.

Sometimes human error is unavoidable—even under the strongest regulatory conditions. To prevent these kinds of oil disasters from happening entirely, we need to transition away from fossil fuels.”

Valentine: “There is a structure in place to respond to this sort of event. I’ve been inside the structure before and it works fairly well when it comes to the cleanup process. The early hours of a spill are always the most challenging as it’s a scramble to get resources in place [editor’s note: it took 12 hours for authorities to respond to reports of oil in the water]. I think one area that can be considered for marine spills is a further investment in early response technologies.”

How much is offshore drilling at fault for this incident?

Choksi-Chugh: “Offshore drilling is just one of many ways that a serious oil spill can occur. The Cosco Busan container ship spilled 53,000 gallons of oil in San Francisco Bay after it crashed into the foot of the Bay Bridge. The Exxon Valdez spill occurred after the tanker hit a reef. Ruptured pipelines are also a common cause of oil spills. A dangerous spill can occur at any stage of oil’s consumption cycle, from drilled extraction to transport to refining and use.”

What’s the one thing folks don’t understand about an oil spill?

Choksi-Chugh: “One thing that I think most people don’t realize is that currently available oil spill cleanup technology is really limited. Oil booms can only do so much. Once oil is in the water, particularly if it’s heavy oil, it’s very difficult to clean up. This is why prevention is so crucial.”

Valentine: “That the distribution of oil and the effects of that oil are extremely patchy and uneven. Some of the greatest effects are on the people that live in the affected communities.”

How long does an oil spill impact the immediate environment?

Choksi-Chugh: “The lasting effects of a spill depend on a variety of factors, from the volume of the spill to the timeliness of the response to the condition of the water body itself. For example, if the waters are choppy, it might be harder for cleanup crews to contain a spill. And while the lasting effects of chemical components of some oils, such as polyaromatic hydrocarbons (PAHs), in the environment are not entirely known, some of these toxic compounds have been linked to cancer and other diseases in people and wildlife exposed to oil and other fossil fuel products.”

Do we have enough awareness around oil spills and prevention?

Choksi-Chugh: “No, we don’t have enough public awareness around oil spills and the long-term consequences for the environment. This topic only gets the limelight in the immediate aftermath of a big spill like this one. And then people forget and move on, so there’s not always enough momentum to improve and implement meaningful prevention measures. Generating more awareness could help generate more lasting change.”

Valentine: “As a society, I think we need to move away from fossil fuels and find alternatives.  Anything people can do to facilitate this transition is useful. For my part, I split my research activity between studying the environment and developing novel biofuels.”

Choksi-Chugh: “Everyone should put pressure on their elected officials to start aggressively transitioning away from fossil fuels. This type of transition will not only help prevent disastrous oil spills like this one, but it will also help slow the threat of the global climate crisis. And that’s an added bonus the planet desperately needs.”

You can donate to the Oiled Wildlife Care Network here, or learn about California’s Office of Spill Prevention and Response here.

You can also read more about the Center for Biological Diversity, which supports the preservation of natural resources more broadly, or get involved in Southern California’s various beach cleans through the Surfrider Foundation, OC Coastkeeper, and more.

Meanwhile, San Francisco’s Baykeeper has been working to protect the Bay Area for over 30 years in court, in congress, and on the water itself. Oceana has spent the last 20 years developing conservation and energy plans, restoring ocean health, and working to protect marine wildlife.

You can also learn more about Earthjustice here, an organization that represents affected communities in their fight against the global oil and gas industries.