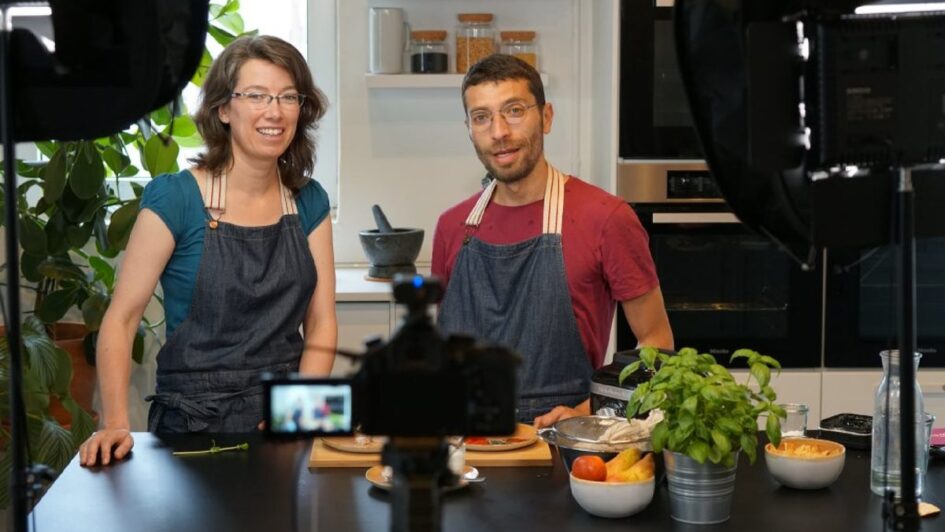 My first attempt at making vegan cheese wasn’t a big success. More a wibbly pudding of nutritional yeast. In the sixteen years since, the vegan cheese scene has exploded. Miyoko Schinner’s 2012 classic Artisan Vegan Cheese, introduced cheese-hungry vegans to the art of fermenting nuts with rejuvelac, a homebrewed grain beverage borrowed from raw foodists. Around that time in Europe, experiments began with vegan strains of penicillium molds to produce nut-based versions of camembert and roquefort.

Today, the craft vegan cheese movement is thriving. I follow dozens of artisanal vegan cheese companies from all over the world, each of them producing next-level rinds and textures I dream of. When I saw many of those makers were going to share their secrets at an online Vegan Cheese Summer Camp, you can bet I smashed the “Going” button.

Vegan Cheese Summer Camp was organized by Jacqueline Castelijns, Anderson Santos, and Martine van Haperen, vegan entrepreneurs based in Europe. If you’re as deep into nut-cheese-Facebook as me, you’ll recognize Berlin-based Santos as the owner of Cashewbert, an online purveyor of vegan cultures and supplies. You may, too, have riffed on the iconic steamed rice cheese invented by blogger and consultant van Haperen, based in Amsterdam. Castelijns is a change manager and lupini bean obsessive dedicated to growing that nutritional powerhouse in the Netherlands. While Santos and van Haperen supplied the cheese knowledge, Castelijns’s project management skills brought the camp to life.

“If just Anderson and I were doing this together, it would have been on a campsite with fifteen people,” van Haperen laughed over Zoom. Instead, they ran the event online, allowing for presenters and “campers” from all over the globe. The schedule featured two pre-recorded expert interviews and one cheesemaking workshop on each of the seven days, plus a daily live “Fireside Chat” hosted by Santos and van Haperen to discuss the day’s proceedings.

When selecting speakers, the team looked for experts in the field of fermentation. They also strove to represent cheesemakers from many countries, and to showcase a diversity of ingredients used for cheese, from the now “traditional” cashew, to split peas, potatoes, and oats. “We tried to find the pioneers of the movement,” van Haperen explained. “People like Miyoko, but also Kashew in Vietnam — they almost have to show people how to eat cheese, because there’s limited cheese culture there.”

Santos hoped to increase exchange between vegan cheese experts worldwide. “I’ve run Cashewbert since 2016…and there hasn’t been a central point where people could discuss ‘What’s the standard of vegan cheese right now and how can we go further to achieve better results?’ That’s my personal motivation for Cheese Camp.”

Now that I’m on the other side of the wild week that was Camp, I can confidently say the standard is dizzyingly high and more inspiring than I could have imagined.

Santos and van Haperen’s videos walked campers through eight cheese recipes from non-fermented rice cheddar to more advanced styles cultured with molds. “I learned a lot, especially about the more complex recipes like camembert,” said camper Rashmi Menon from Michigan. “I wasn’t expecting to spend much of my spare time in August making vegan cheese, but here I am!” Chris Van Dyke of Northern Virginia said, “I really felt like I accomplished something new!” after making the first vegan cheese of her life.

Though Katie Jones, proprietor of Florida’s Catalyst Creamery, had made most of the cheeses before, van Haperen’s “goat” style, made with millet and geotrichum yeast, was new to her. The experiment-in-progress posted to Jones’s Instagram looks like a gorgeous little brain. Becky Barr, owner of Erin, Ontario’s The Nutty Herbivore, just posted her first blue, the success of which she attributes to camp. “I found the videos of the recipes being made very helpful,” she said.

Camp featured the founders of ten vegan cheese companies, all of whom shared equal parts cheese and business knowledge. Schinner and McAthy discussed the triumphs and pitfalls of their significant scale-ups, while the UK’s Sumear Safdar-Robins spoke to his goal of keeping Food By Sumear small and stress-free. The owners of Tasmania’s Lauds spoke passionately about maintaining a clear “why” — theirs is simply getting more people eating plant-based foods — and everyone emphasized doing more for sustainability and animal welfare, from from donating a percentage of sales to sanctuaries to closely inspecting cashew supply chains to building factories that don’t depend on fossil fuels.

For me, the highlight of each interview was when van Haperen sweetly asked “Can we meet some of your cheeses?” New Roots’ Alice Fauconnet joked, “I wish you could record the smell!” as her partner Freddy Hunziker showed off their new smear-ripened beauty. We met Safdar-Robins’ cashew-based giants that sport natural rinds as mottled and wild as anything in the dairy world. Michaela Grob toured us through Riverdel’s glorious “dairy case” in Manhattan’s Essex Market where cheeses are sold by weight, both house-made and by other artisanal American makers. Lê Na Dau Thi, co-owner of Kashew, introduced her collection of chili-infused cashew cheeses, explaining that in Vietnam certain chilis naturally grow near cashew trees — what grows together goes together, cheese edition!

For the fermentation dork, the interviews were an extravaganza, featuring both penicillium mold and koji experts alongside the cheesemakers — a boon for nervous home cooks like me who fear poisoning their families with moldered nuts.

McAthy, too, dropped serious fermentation knowledge, with reference to the recently released second edition of her acclaimed The Art of Plantbased Cheesemaking. She and an openly starstruck Santos chatted for almost an hour about everything from the optimal plant-based matrix — for McAthy it’s a combo of nuts, beans, and fats — to the effects of yeasts, molds, and different temperatures on the ferment’s flavour and texture. About to embark on a major research project involving microbes and even alt-proteins — a techy side of the vegan cheese world that Cheese Camp only touched on — McAthy noted over email that “it’s this movement of activists, DIYer’s, and small scale businesses that have led to the possibility of other approaches,” through their relentless experiments with fermentation.

Though these makers are invested in food for the future, respect for the historical art of cheesemaking was evident throughout the interviews. New Roots and Jay and Joy, both in major cheese countries (Switzerland and France, respectively), have conventional cheesemakers involved in their businesses and understand tradition. When faced with resistance from Swiss dairy enthusiasts, Fauconnet and Hunziker respond, “We love cheese traditions so much that we want them to sustain in the future.” Like Schinner, The New Roots team is also committed to making local farmers “part of our success and part of this new movement,” by including them in their plans to make cheeses from more Swiss-grown ingredients.

Jay and Joy co-owner Mary Carmen Iriarte Jähnke explained, “We have a couple of [dairy] cheesemakers that are huge mentors from the beginning who have been really open to having this conversation. When they see the passion…our dedication to craftsmanship and to taking this story into the future, they understand. They want to be a part of it.” Iriarte Jähnke also developed a “Joie Gras” paté alongside their brie and chevre-type cheeses to serve as a substitute at Christmas when Parisians eat foie gras. She said, “People were so happy to share that with their family.” Van Haperen responded, “People…often feel like you’re taking something away from them. But actually you are adding things to the world and making it more beautiful.”

Indeed, what struck me most about the interviews was that every single maker was driven to make the world a better place by producing delicious vegan cheese. Lauds co-owner Dani Wheatley described her unique path into food production via her psychology studies. “I learned that even if people intend to make changes in their behavior, that’s not enough. Changing that behavior requires them to have a product or service…that makes them feel like they’re not changing at all.” This insight motivates her to continue making vegan cheese that anyone would love, from their creamy almond feta to a savory, sliceable smoked oat.

Every camper I spoke to exuded excitement. “There was this community sense,” Jones said. “I learned tips from every person that spoke.”

The organizers were thrilled themselves. Santos sees Camp as a step toward Cashewbert’s goal of increasing accessibility and cross-pollination in this field. “Everybody’s doing cheese in their own way, and now you have more reference,” he said. “When people ask me how to get started, now I can just say ‘Go to Cheese Camp!’ And then you have everything.”

Staging the event was more work than expected but the team agreed it was worth the labor of love. They were proud to have kept the price low so the event was accessible to so many — over 600 campers and counting, from Brazil to Kenya, India to France.

Was the whole thing nerdy as hell? It was. Would I have it any other way? Absolutely not. Reviewing the material in the shadow of the U.N.’s recent, dismal climate report, I was a weepy mess watching all these people unabashedly try so hard to make a world where gastronomic pleasure, long-held traditions, and sustainability can co-exist. For my part, I’ve just received a shipment of local hazelnuts, kefir grains are on my list, and I’m ready for an experimental fall thanks to Vegan Cheese Summer Camp.

RELATED: Miyoko Schinner on Indulgence, ‘The Vegan Meat Cookbook,’ and the Meal that Changed Her Life