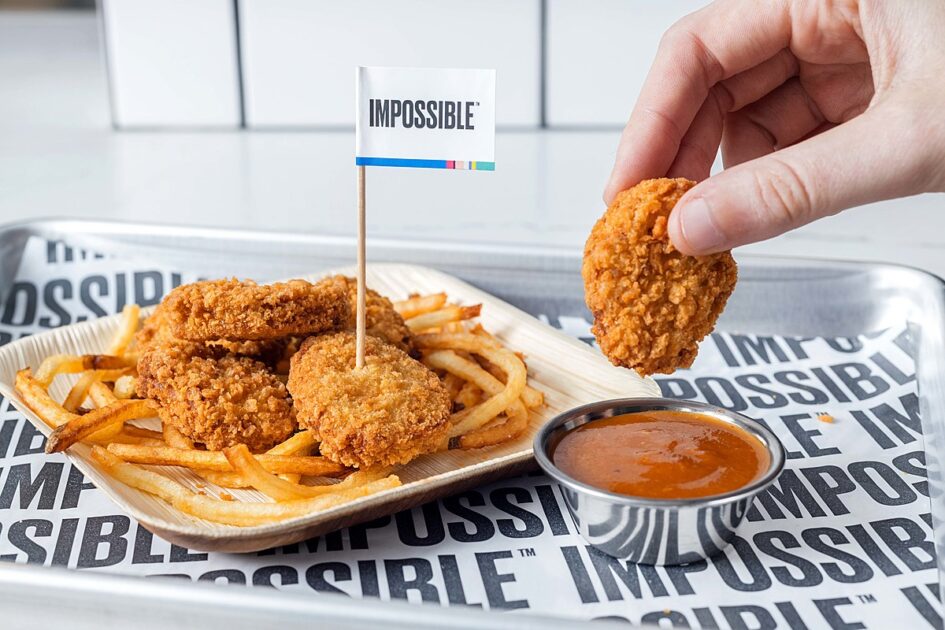 Impossible Foods is now giving the masses what they want: Vegan chicken nuggets. Starting today, Impossible Chicken Nuggets Made From Plants are available at select restaurants and coming to grocery stores later this month. I got to taste them and here’s what I thought.

As the chicken wars heat up amongst companies making better-for-the-planet meat replacements, these meatless chicken nuggets have been highly anticipated. Here, we break down everything you need to know about the Impossible Chicken Nuggets, including how they taste.

Where to buy Impossible Chicken Nuggets

Starting today, Impossible Chicken nuggets will appear at restaurants across the country, including Fuku in New York City; Red Rooster in Harlem and Miami; Joyland in Nashville; Crossroads Kitchen in LA; and El Alto Jr., at the new State Street Market in Los Altos. You can also find at regional chains and restaurants including LA’s Fatburger, Gott’s Roadside in the Bay Area, and select Dog Haus locations nationwide.

In 2016, Chef David Chang was the first chef to launch Impossible Foods’ flagship Impossible Burger on the menu at his hotspot Momofuku, so it’s fitting that he is one of the first chefs to feature Impossible Nuggets on the Fuku menu, a spinoff concept with locations at New York’s Hudson Yards and Rockefeller Center. He’ll serve Impossible  Nuggets with a choice of two house-made sauces and optional waffle fries. “We were blown away by the Impossible Burger when it launched at Momofuku in 2016, and we feel the same way about Impossible Chicken Nuggets,” Fuku CEO Alex Munoz-Suarez announced. “Impossible Nuggies pair perfectly with the playfulness of Fuku’s menu and will satisfy the cravings of fried chicken lovers looking for an alternative bite.”

The 100 percent plant-based LA hotspot Crossroads Kitchen is serving Impossible Chicken Nuggets with potato and cauliflower croquettes, agave mustard dipping sauce and vegan mac and cheese. On its Late Night Menu which starts a Reverse Happy Hour at 9 pm, the Impossible Nuggets will be served with steak fries and three dipping sauces.

Later this month, Impossible Chicken Nuggets will be carried at Walmart, Kroger, Albertsons, Safeway, ShopRite, Giant Stores, Gelson’s, and other stores. Impossible Foods will also be expanding its availability to more than 10,000 supermarkets throughout the year. With a retail price of $7.99, Impossible Chicken Nuggets can be found in the freezer aisle, for a 13-ounce package of about 20 pieces that are ready to heat via microwave, air fryer, or oven.

Impossible Foods is more focused on creating food alternatives that promote a healthier environment by getting away from the culture of animal agriculture. The company’s mission statement says the purpose is to “make [the] global food system truly sustainable by eliminating the need to make food from animals.” Animal agriculture is one of the leading contributors of manmade greenhouse gases, and companies like Impossible Foods is offering a more sustainable option.

Based on a preliminary study that the company calls a “Life Cycle Assessment” of the product, Impossible Chicken Nuggets use 48 to 49 percent less land, 43 to 44 percent less water, and generates 36 percent fewer greenhouse gas emissions than the animal version.

How do Impossible Chicken Nuggets taste?

Although Impossible Nuggets grocery store products won’t debut until later this month, I got an early taste to find out if they were as good as the company states.

Impossible claims that “7 out of 10 consumers preferred the Impossible Chicken Nuggets to the leading animal-based chicken nuggets; the test was conducted in Irving, Texas, among 201 meat-eating consumers, many of whom also regularly eat plant-based products,” as stated in a press release. We of course had to see how that claimed matches up with reality.

The verdict on grocery-bought Impossible Chicken Nuggets? Damn good. Both vegans and meat-eaters I did a tasting with liked and said they would not be able to distinguish from animal-meat nuggets — and they all went back for seconds.

“Our technology platform allows us to recreate animal products across protein categories that outperform the animal versions in every way,” says Dennis Woodside, President of Impossible Foods. “Poultry is the most consumed meat in the US, and Impossible Chicken Nuggets represent an incredible opportunity to transform the industry with a more delicious and sustainable version of a classic.”