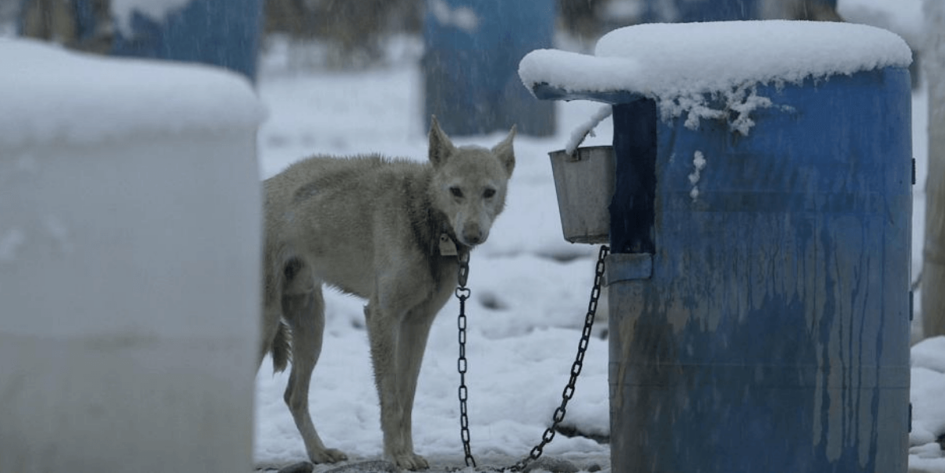 The 50th Iditarod is fast approaching, and dogs are in danger. In this grueling outdoor Alaskan event, dogs are forced to pull humans known as “mushers” on sleds for an average of 100 miles a day, every day, for nearly two weeks. A first-of-its-kind PETA eyewitness investigation into kennels owned by Iditarod winners found chained dogs who had worn-down, raw, and bloody paw pads from frantically running in tight circles around the barrels that they were tied to; arthritic, crippled, and injured dogs who were denied veterinary care; dogs who were dragged and injured during training; and one who was even killed. What takes place once the race begins is often even more gruesome.

Nearly 200 dogs were pulled out of the 2021 Iditarod because they were too exhausted, ill, or injured to continue—likely because of being forced to run an average of 100 miles a day in extreme weather conditions. No mushers have died during the Iditarod, but more than 150 dogs have. The humans involved in the race are largely just along for the ride, sometimes even sleeping while the dogs run a race that offers them no reward. The Iditarod does not measure human endurance—it measures a dog’s ability to survive extreme cruelty.

Dogs are not sporting equipment, and keeping them chained outside, especially in extreme weather conditions, is dangerous and barbaric. The mushers listed below and their abusive actions are stark examples of why this egregious spectacle needs to end.

SOME OF THE WORST IDITAROD MUSHERS EXPLOITING DOGS

The “winner” of the Iditarod in 2021, Dallas Seavey, has a record of animal misuse as long as the Iditarod trail itself. Dogs raced by him have tested positive for opioids, his kennel was accused of killing dogs who were deemed not ideal for racing, and a whistleblower reported finding dying puppies on his property.

Iditarod cruelty seems to be a Seavey family tradition: Dallas and his father, Mitch, have gone on the record describing whacking dogs with a willow stick, withholding food from growing puppies so they would turn into “piranhas,” and removing dewclaws (a dog’s equivalent of a thumb) with a toenail clipper and no painkillers.

A three-time Iditarod winner (2004, 2013, and 2017), Mitch Seavey and his employees have a documented history of mistreating and neglecting dogs. At his kennel, a PETA investigator found scores of dogs continuously chained to barrels. Some had run in circles for so long that their paw pads were worn down or raw. Dogs were forced to run day after day, even when their paws or nails were bleeding. Some workers hit dogs in the face to make them line up in front of the sleds. When a team of dogs broke free from a sled, one was dragged to death while another was dragged for up to 2.5 miles and left urinating blood. Some animals’ tongues froze to metal harness lines and the skin was torn off, while others’ footpads bled profusely. No veterinarian examined these injuries.

“Yeah, yeah. She’s just tired”—that’s what Iditarod musher Richie Beattie told KTVA reporter Daniella Rivera when she spotted Beattie dragging Oshi, one of the dogs he forced to run in the cruel race in 2019, to the towline with his other dogs. Just a day after crossing the finish line, Oshi was dead. She died of aspiration pneumonia—a result of inhaling her own vomit—the leading cause of death for dogs used in the Iditarod.

Pete Kaiser finished first in 2019 but at a high cost to the dogs who were forced to participate. Hundreds of dogs (including six from Kaiser’s team) were so sick, exhausted, or injured that they were pulled from the race, forcing the remaining ones to work even harder. Any musher’s prize money comes at the expense of exhausted dogs who incur broken bones, bruised paws, and bloody ulcers.

Of the 14 dogs Ryan Redington began the 2021 race with, eight were pushed beyond their breaking points and had to be removed from the trail. The remaining six were forced to work even harder.

Some mushers apparently consider cruelty to animals “training.” Holmes posted a video to his Facebook account in 2019 showing a group of harnessed dogs being forced to negotiate neck-deep floodwaters while hauling a large metal carriage. In the video, one dog climbs on top of another in an apparent attempt to rest or escape the floodwaters. The videographer declares that the dogs had already towed the vehicle for at least half a mile.

Martin Buser has placed among the top 10 finishers in 16 Iditarod races, winning the event four times.

According to the Anchorage Daily News, Buser was caught taking shortcuts in the 2016 Kuskokwim 300, another grueling Alaskan dogsledding race. He also accepted outside help in feeding the dogs he forced to run during the race, in violation of the rules. (The fact that there are rules in place prohibiting helping dogs should tell you something.) He was penalized for this cheating, ultimately causing him to place last.

In 2010, his son Rohn—also an Iditarod musher—was arrested after leading police on a car chase that reportedly ended in an hour-long standoff. Rohn was charged with multiple crimes, including reckless driving and assault.

Men and women who harm animals often direct their violence toward other humans. According to the New York Daily News, musher Travis Beals was suspended from competing in the Iditarod for “an indefinite period of time” after being charged with assault stemming from a domestic violence incident. Allegedly, that wasn’t the first time he’d physically harmed his partner. Beals’ suspension lasted one year, and he competed in the 2020 Iditarod.

Help Dogs Suffering in the Iditarod

After hearing from PETA and our members and supporters, many companies dropped their Iditarod sponsorships—a huge blow to the cruel event. But a few, including Millennium Hotels and Resorts, continue to fund this deadly spectacle. Do right by dogs and join PETA—along with tens of thousands of other compassionate people—in demanding that Millennium stop sponsoring the abusive race.

Owner of Notorious Beagle Supplier Has a New Shareholder: PETA

The 2022 Iditarod Hasn’t Even Started Yet, and Already at Least One Dog Has Been Killed