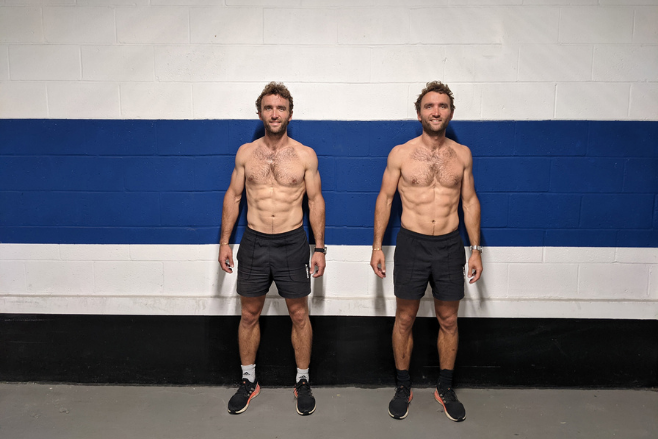 Adventurers, Hugo and Ross – aka the Turner Twins, put themselves through a 12-week endurance fitness program to find out the differences between plant and animal protein shakes.

The start of a 12-week fitness study is always filled with anticipation and excitement whoever you are. But for The Turner Twins, it’s business as usual. 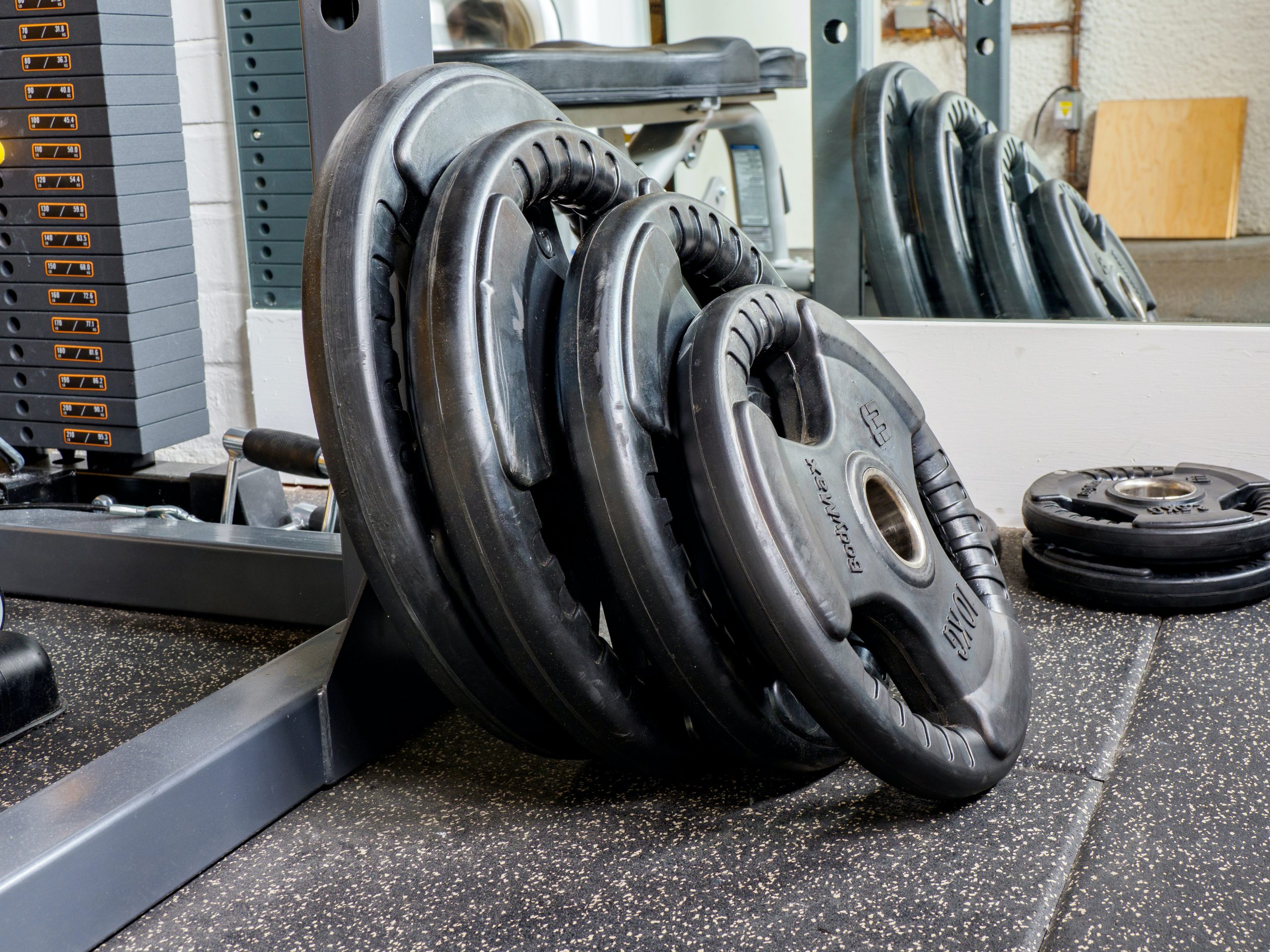 “We spoke with numerous people about what we were about to do, and we got a huge number of questions, professional interest and opinions from friends and the wider fitness community,” says Ross.

It’s no surprise that anyone setting out to compare plant products against their animal counterparts will always generate considerable curiosity (and many heated debates) as the vegan debate is such a spicy topic.

Last year, the Turner Twins compared a vegan diet against a meat diet over a 12-week study and the resulting article went viral. People from all over the world reached out with very passionate opinions and views which created huge debate. The Twins explain that they are ‘not trying to say one product is better than the other, but rather, they’re trying to highlight any differences when comparing the two protein products. It is up to you what you do with our latest findings’.

The study was a 12-week endurance programme to help find the performance differences (if any) between Vivolife plant-based Perform protein and an off the high street animal-based protein (protein shakes taken post workout). Throughout the experiment the Turner Twins ate roughly the same calories and foods thanks to Mindful Chef food delivered weekly, but the key difference of the diet and study, was Hugo consumed animal protein shakes, while Ross had Vivolife Perform protein shakes (post workout). 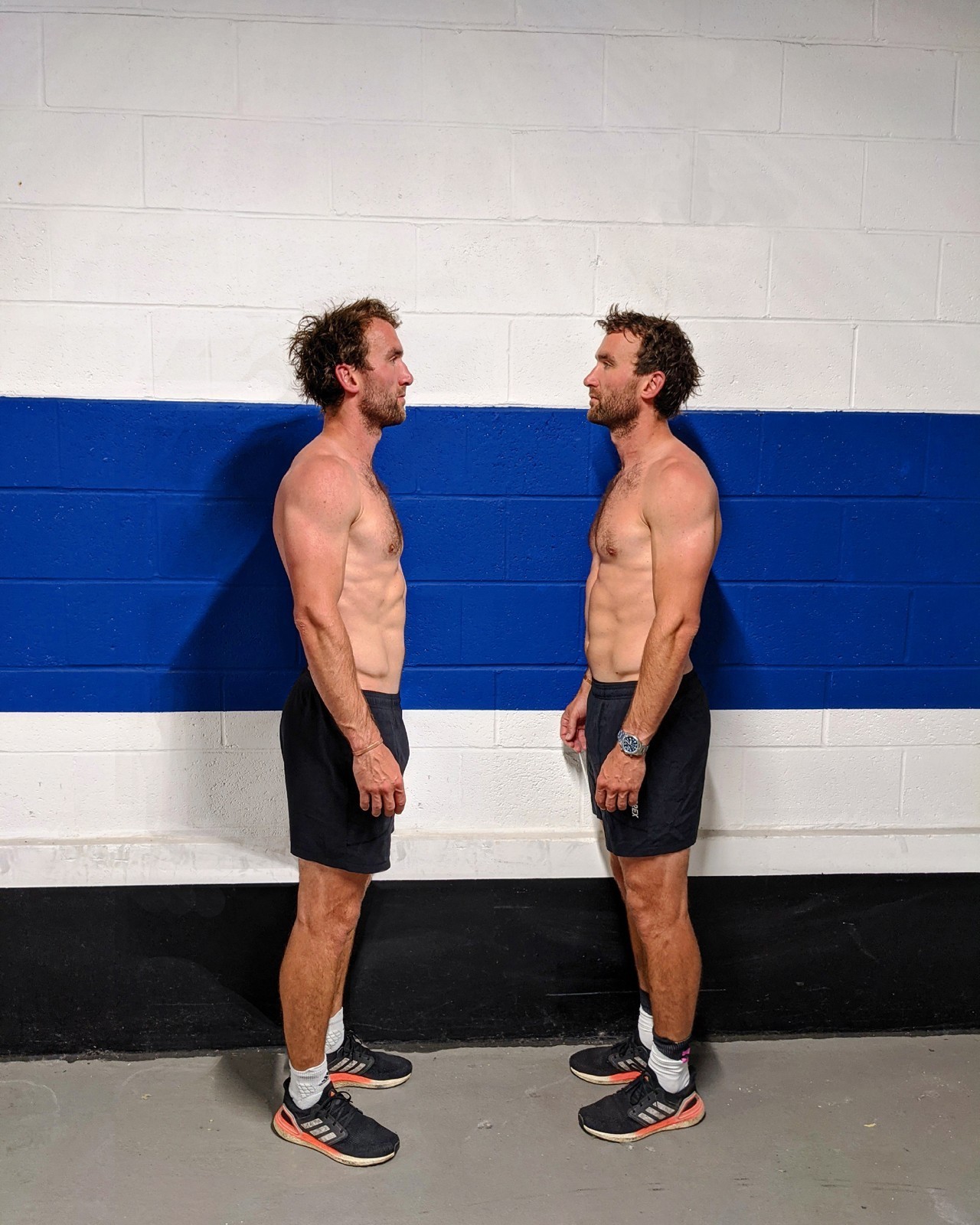 Before the study began, the Twins took Boditrax scans at various Virgin Active gyms, which provide whole body stats of their physiological footprint such as fat percentage, muscle mass, weight etc, so they could track changes throughout the experiment. Other areas monitored included physiological tests such as bench press, press ups, dead lift, VO2 submaximal and pull ups. The important thing with all these tests is that they did them together throughout the 12-weeks so they could directly compare their results. 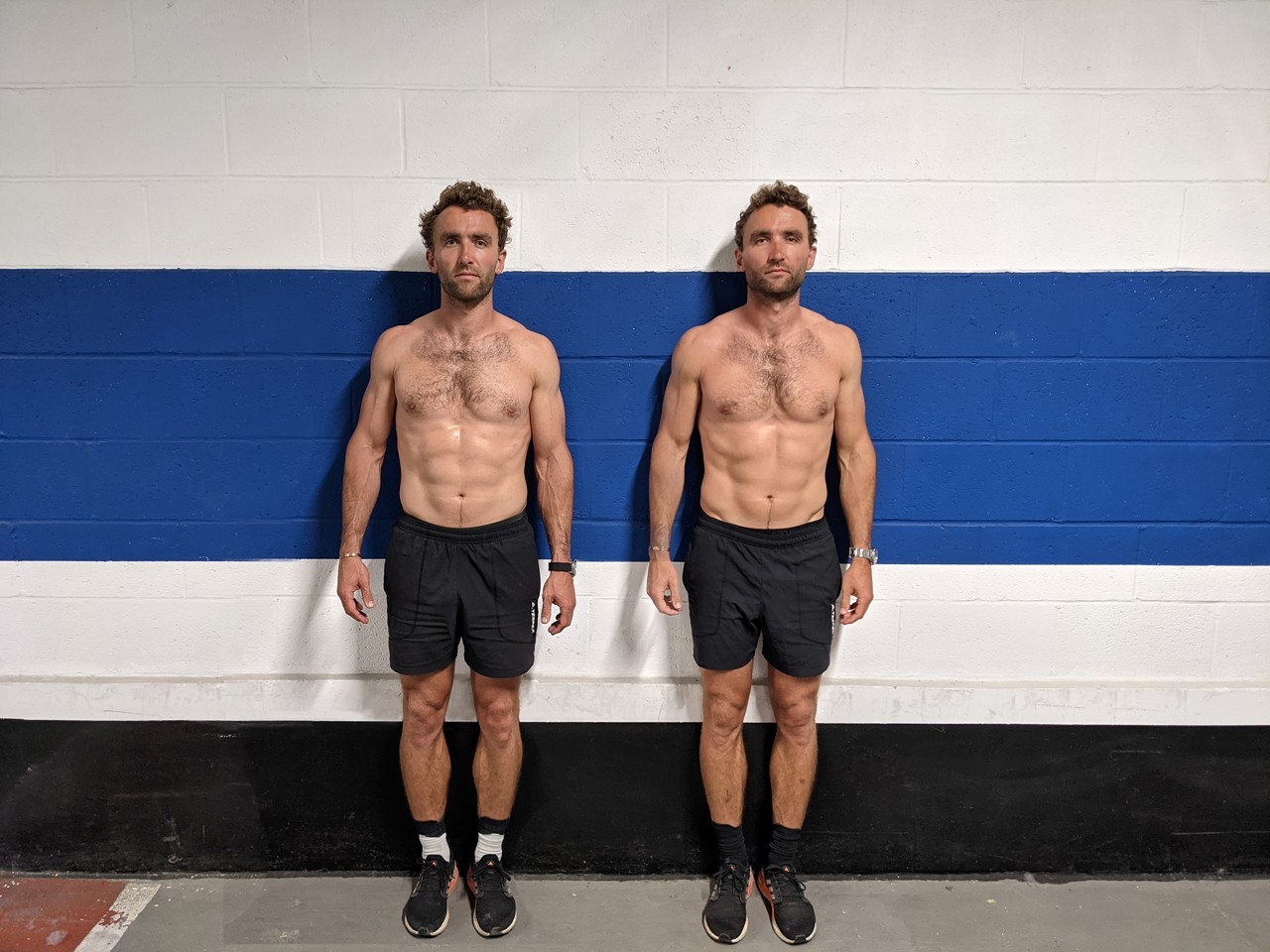 With such a busy schedule over the three months of this study, the Twins knew there were going to be moments when they couldn’t make it to the gym, either because of work or social commitments or on one of their week-long adventures somewhere around the British Isles. Again, the main thing here was both had the same time in and out of the gym. Consistency was the name of the game. 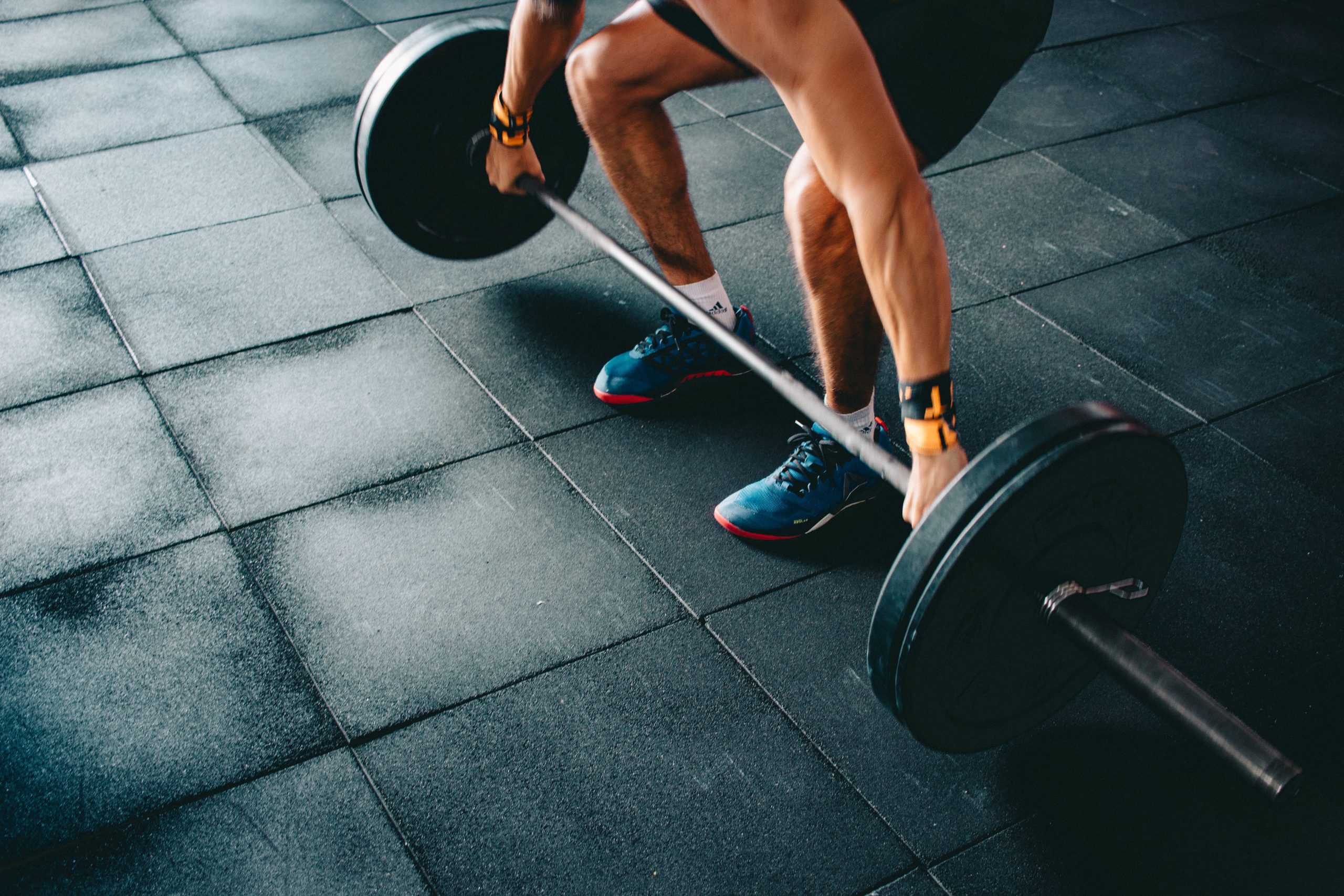 “In terms of the protein shake profile consumed post workout, we essentially had the same macro profile, so all in all they weren’t expecting to see a vast change or difference in performance or body shape,” says Hugo.

However, the biggest difference they noticed with the two products was taste. The animal protein tasted far more synthetic than the plant-based protein. Hugo found it tasted very sweet and very artificial – not that tasty when you’ve been used to more natural tasting shakes.

As the study progressed, they noticed their Boditrax profiles changing due to their bodies adapting to the training and load. 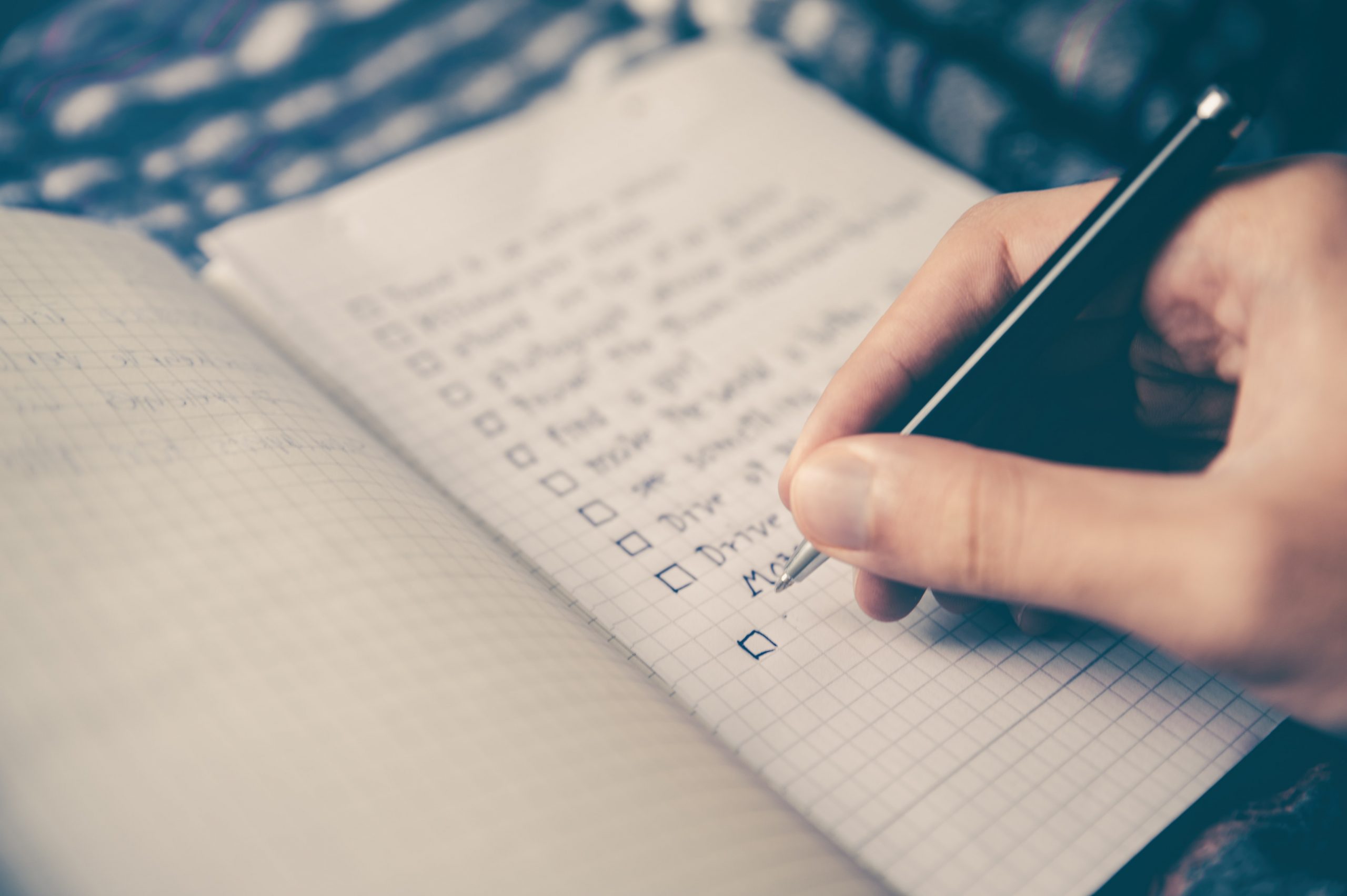 “It was interesting to see how our profiles (see graphs) changed at similar rates and generally followed each other. This was something that we expected to happen but seeing it after weeks of training was very rewarding,” mentioned Ross.

Their goal with this endurance training was to drop a little weight, but increase overall strength, meaning efficiency increased and the chance of success on a long expedition improved.

The Turner Twins’ endurance training consisted of either low weight, high reps or very high weight, very low reps. The Twins like to stay in the high rep ranges and their movements are always functional. Compound or complex movements make time in the gym far more efficient. As they’re not training specifically for an upcoming expedition, general health, endurance and fitness was the goal of this programme. Below is an example from one of their training days. 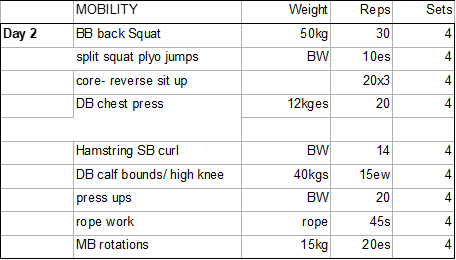 Ross says: “Our expedition fitness levels are neither extremely high nor extremely unhealthy. It’s finding that happy balance between conditioning our bodies to a level where extreme adventures and expeditions become easier, verses carrying too much muscle mass where you need to eat a huge number of calories. It’s very hard to carry and indeed eat thousands of calories per day when you are on an expedition.”

At the end of the 12-week study it was clear that there were no real extra benefits or drawbacks to using either product. Plant-based protein has the same impact on your training as animal protein for the 9am to 5pm gymgoer. On top of this, elite athletes have been using Vivo life products with huge success – plant protein works! But for the Turner Twins and as a baseline summary from their study, you’re going to get similar results with plant-based protein as you would using animal protein. 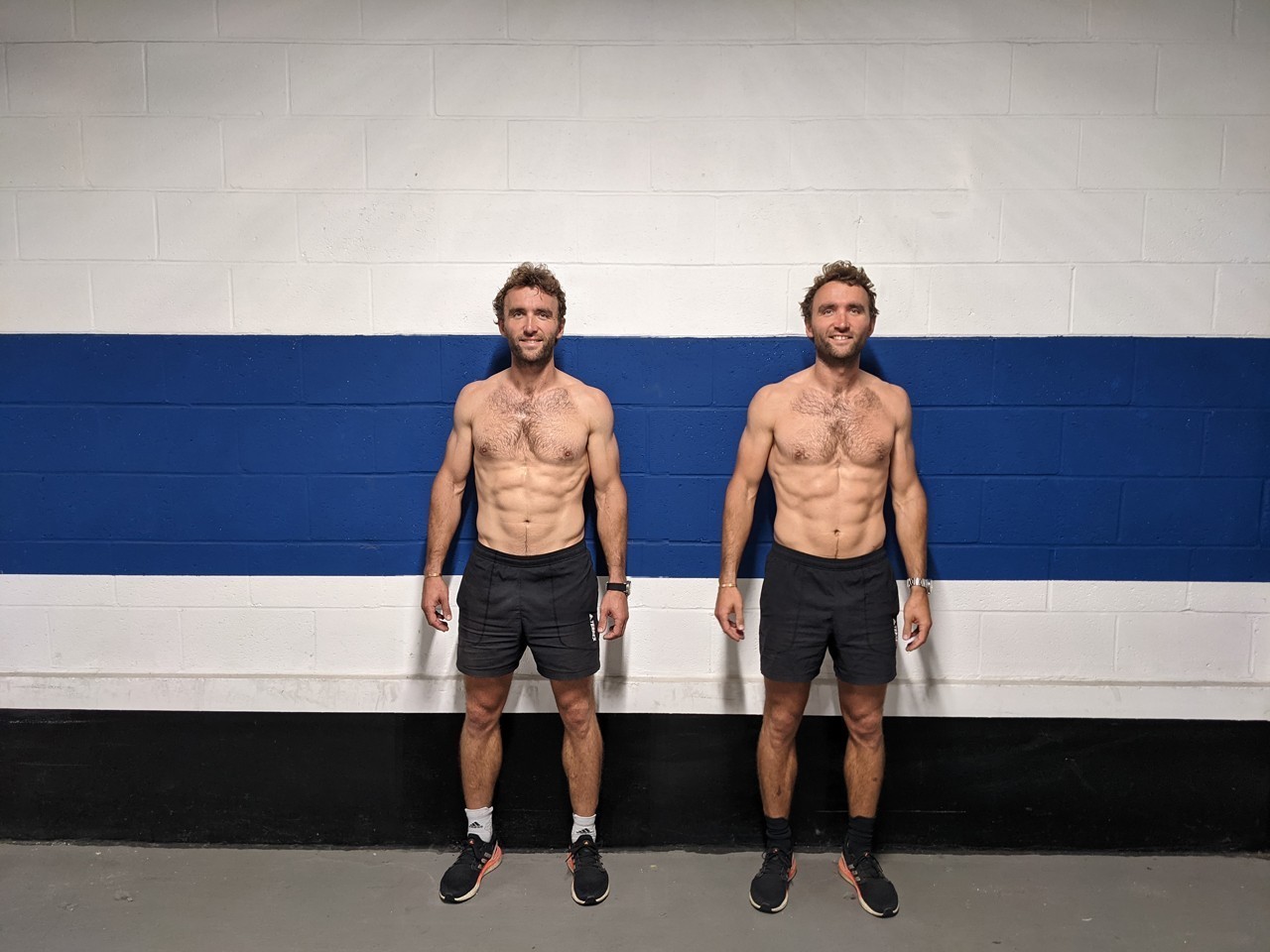 All three graphs highlight that there is a link between their training and what their bodies did over the duration of the 12-week programme. There are a few data points that look strange on each graph – either far too high or too low – compared to the other date points. If you take these out and then take an average for both, there is a strong correlation between their results. Ideally, they’d like to do this study for 6-months, if not a year, but in their line of work that’s not realistic. 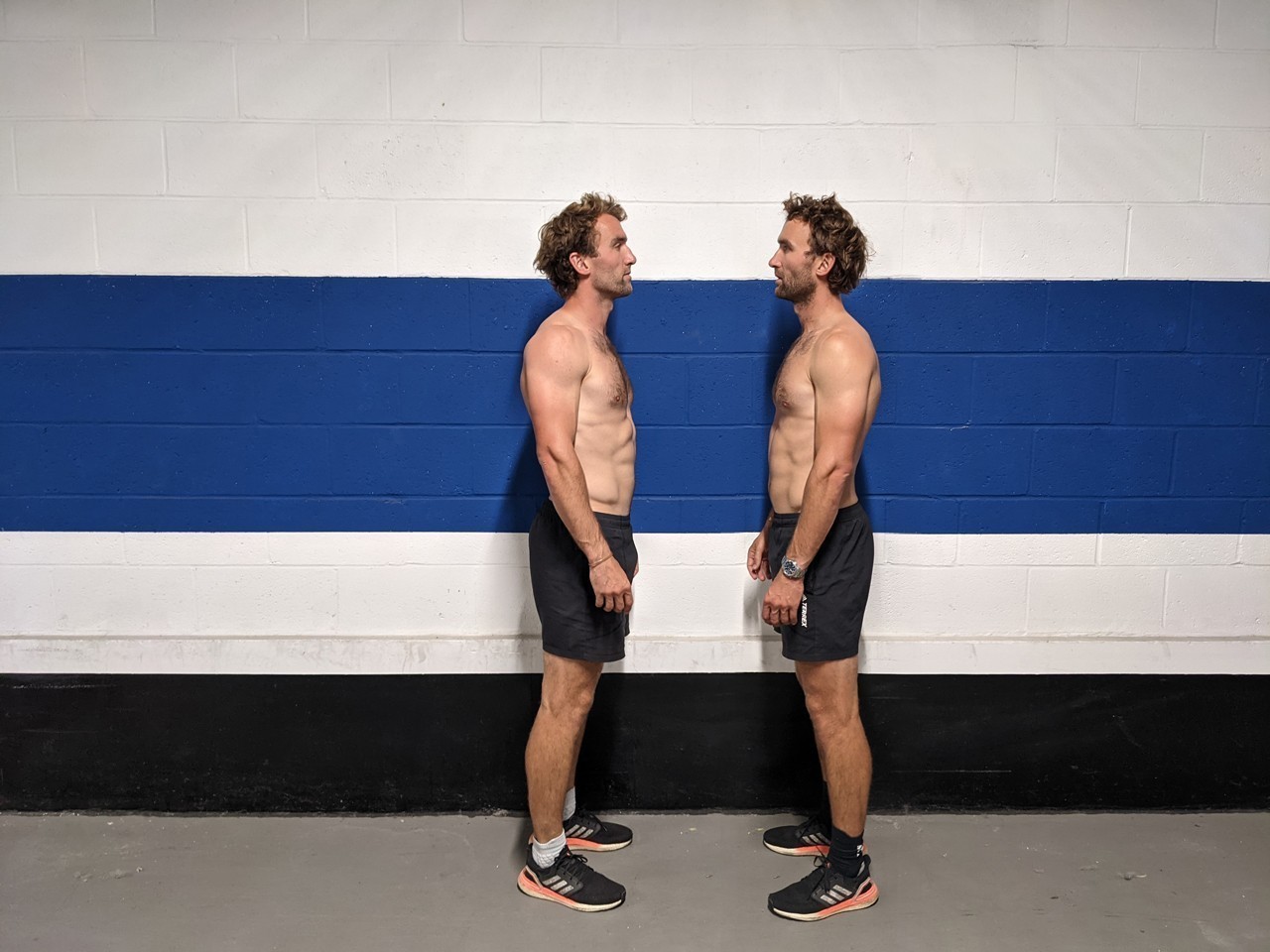 “We’re not saying this study is absolute. There’s a huge amount more testing we could do to uncover more data and results,” Hugo adds.

“It’s only a little look into the top line results of this particular study, which from our numerous 12-weeks studies we’ve already done, we’d conclude there’s little different in results and performance when drinking either plant or animal protein (shakes).”

The main benefits of using VivoLife Perform is that it is vegan-friendly, it’s carbon neutral, they plant one tree for every order, it’s organic and their scoops and bags are all compostable or recyclable.

“Why wouldn’t you use Vivo?” says Ross. 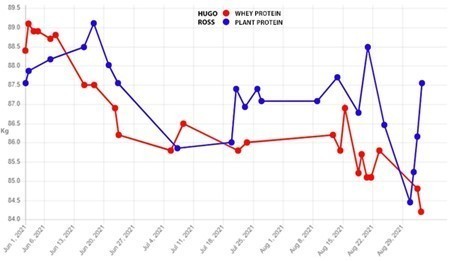 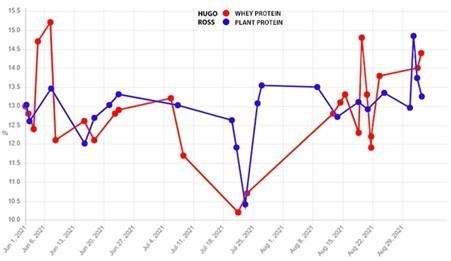 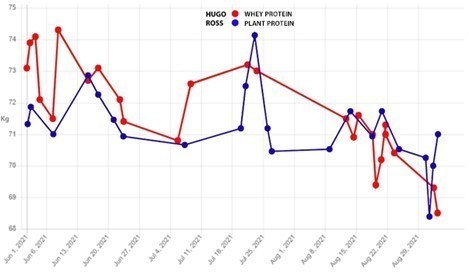 The Turner Twins (Hugo & Ross) are professional adventurers whose mission continues to discover new knowledge through their expeditions and inspire positive change. In 2007, Hugo was lucky enough to walk away from an injury after sustaining a broken neck (C7) in a diving accident, which has been a key driving force behind their expeditions. They are stronger together.

The Twins have undergone a host of world-first expeditions to aid medical and scientific research. Monitoring the performance of historic clothing and equipment and their genetic and physical makeup, the two have travelled into the unknown and reached several Poles of inaccessibility. Having rowed the Atlantic Ocean, climbed Mount Elbrus, attempted to trek the Greenland Ice Cap and reached the Australian, North and South American and Iberian Poles, they are no strangers to danger and going where no one has gone before.