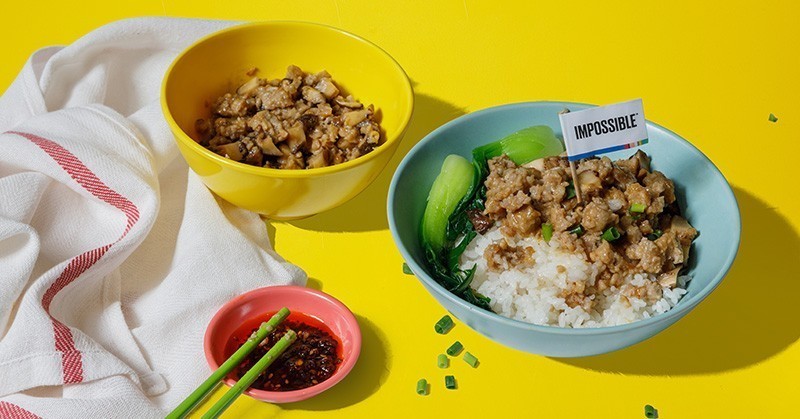 This Thursday, Impossible Foods debuted vegan pork at Momofuku Ssäm Bar in Manhattan. The Impossible Pork will be released at more than 100 restaurants in Hong Kong beginning October 4, with a further global release to follow.

Momofuku Ssäm Bar is at the top of a very coveted list as the first and only US restaurant to currently carry the Impossible Pork. The product will appear on their menu as a part of the spicy rice cakes—which come with a fermented bean and chili sauce base, fried crispy shallots, broccoli stems, and whipped tofu—and will be the restaurant’s most prominent vegan option.

The popular Korean restaurant from Chef David Chang (whose other concepts boast two Michelin Stars) has always been a fan of Impossible Foods. Chang was the first chef to launch Impossible’s flagship Impossible Burger at his restaurant Momofuku Nishi back in 2016, and he just recently added Impossible Chicken Nuggets to his fried chicken concept Fuku earlier this month.

Preceding the release of their vegan pork, Impossible Foods conducted a blind taste test of more than 200 consumers in Hong Kong. The results? 54% of consumers preferred Impossible Pork over animal-based pork, with the plant-based pork scoring higher on every single attribute that was tested, including overall liking, appearance, flavor, texture, and purchase intent.

As Impossible Pork is much more sustainable than animal-based pork, this is a major development for consumers looking to drop their meat intake. The vegan pork uses 81-85% less water and 66-82% less land and generates 73-77% less greenhouse gas emissions than its animal-based counterpart. Time Magazine named Impossible Pork to its Best Inventions of 2020 after its preview at the International Consumer Electronics Show last year.

Impossible Pork is made from soy, is gluten-free, and contains fewer calories and less saturated fat per serving than animal-based pork, while scoring higher on iron content. It has a mild savory flavor and all of the juiciness that is found in traditional pork. It is versatile and can be served in a variety of different cuisines. When released in Hong Kong, it will be showcased in Chinese, Japanese, and Thai restaurants.

If you’re in the Manhattan area and want to try out the vegan pork, head over to Momofuku Ssäm Bar at 89 South Street, Pier 17, New York. The dish will be on the menu for a limited time only, so make a reservation as soon as possible! And if you’re in California, Asian Box just launched a new Impossible Pork Meatball Box.