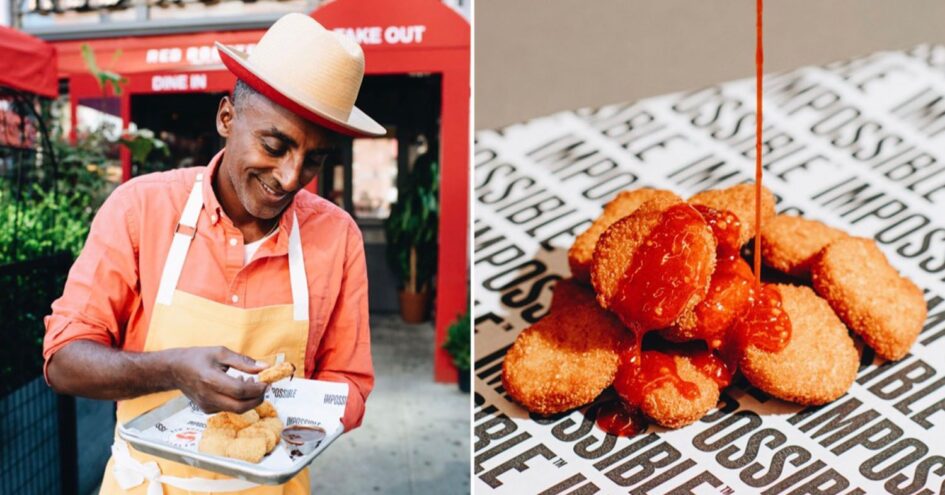 The vegan chicken battle is on: Impossible Foods nuggets have launched nationwide. (Shots fired, Beyond Meat.) And we may or may not already have our dipping sauces ready…

The plant-based nuggets feature soy protein and sunflower oil, which gives them a similar taste and texture to that of animal-derived nuggets.

While the nuggets will initially only be available in select restaurants, they will launch to retail outlets later this month. Restaurants that currently carry the nuggets include David Chang’s Fuku in New York City, Marcus Samuelsson’s Red Rooster in Harlem and Miami, Sean Brock’s Joyland in Nashville, and Tal Ronnen’s Crossroads Kitchen in Los Angeles. Regional chains such as Fatburger and Gott’s Roadside will start selling the nuggets this week. Retailers slated to sell the nuggets include Walmart, Kroger, Albertsons, and Safeway.

Unlike the brand’s meatless burgers and sausages (currently only available for foodservice), the nuggets do not contain heme. Also known as soy leghemoglobin, short for legume hemoglobin, the company’s flagship ingredient gives Impossible’s products a meaty flavor and juicy texture. But the fact that heme is genetically modified has barred the company from launching its products in the Europe and China mainland markets.

“In prototypes, we did include a small amount of heme and tested without,” Laura Kliman, Impossible’s senior flavor scientist, told Bloomberg. “We found in a nugget format, which is breaded and has some seasoning, it really wasn’t that necessary.”

Impossible Foods isn’t the only plant-based company to enter the vegan chicken wars. The company’s rival Beyond Meat rolled out vegan chicken tenders this summer.

The Beyond Chicken Tenders launched in nearly 400 restaurants around the country. They feature a crispy breading and are made from a variety of plant-based ingredients—such as faba beans and peas. They also look, cook, and taste just like their animal-derived counterparts.

“We’re innovating the poultry market with the new Beyond Chicken Tenders—the result of our tireless pursuit for excellence and growth at Beyond Meat,” said Dariush Ajami, Chief Innovation Officer, Beyond Meat.

The vegan chicken market has certainly taken off in recent years. LikeMeat, which is part of LIVEKINDLY Collective’s portfolio of brands, made its official U.S. debut earlier this year, launching vegan chicken at Sprouts Farmers Market.

Other players that are relatively new to the vegan chicken game include Simulate, formerly known as Nuggs, and Daring Foods. The former recently landed an investment from Jay-Z’s investment firm, Marcy Venture Partners.

In addition to the plant-based chicken, Impossible Foods may follow in Beyond Meat’s footsteps again. The company is reportedly set to go public on the stock market within the next year. Its initial public offering is valued at around $10 billion.

Beyond Meat became the first vegan company to IPO in 2019. Its stock skyrocketed by 163 percent on its first day of trading. It was valued at $13 billion only three months after going public.