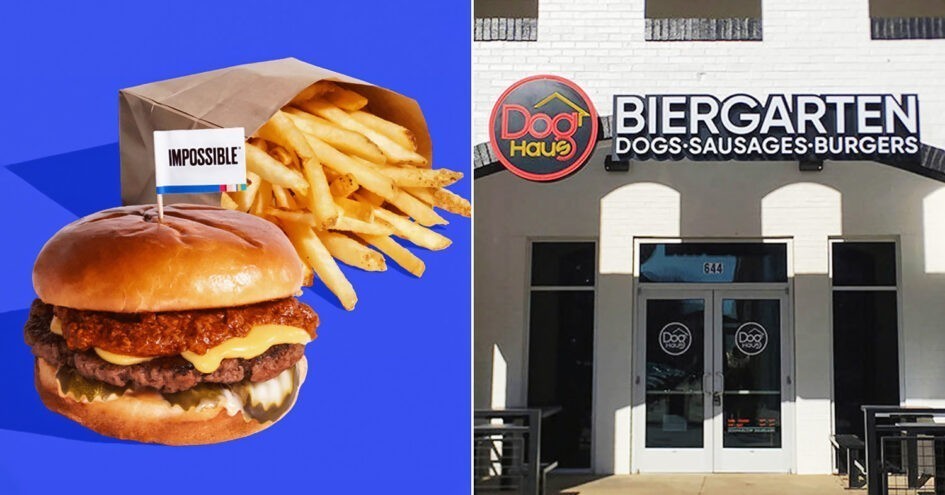 Impossible Foods is cooking up something good. The California-based brand has launched a restaurant concept in partnership with hot dog chain Dog Haus.

In addition to staples like burgers and chili cheese fries, menu offerings include the Impossible Pat-B Melt, which is named after the company’s founder and CEO, Pat Brown. The sandwich features a seared Impossible Burger patty, caramelized onions, dairy-free cheese sauce, and dill pickles all on sourdough bread.

The Impossible Shop will be operating as a ghost kitchen, which means the new plant-based menu offerings won’t be found on Dog Haus’ menu. Hungry diners can order the concept’s offerings for pick up or delivery.

The expansion of Impossible Foods

In November, Impossible Foods announced a $500 million funding round, bringing its total funding to $2 billion. Since its founding in 2011, the company has been expanding its range of vegan meats. It’s rolled out its products in grocery stores and restaurants around the world.

“We’re innovating faster than ever and developing our products with qualities that matter most to consumers, including everything from taste to convenience,” said Ravi Thakkar. Thakkar is Impossible Foods’ vice president of product and commercialization.

Recently, the company debuted meatless meatballs. The vegan meatballs come pre-formed and fully cooked and are packed with 12 grams of protein per serving. In September, Impossible launched its vegan pork in select restaurants in New York and Hong Kong.

The company’s even working on whole-cut plant-based meats. “Think about chicken breasts, think about steaks, think about something like bacon,” said Impossible Foods’ president Dennis Woodside.

During a 2020 virtual conference, Brown said Impossible’s ultimate goal is to make animal-based meats obsolete. “Our mission is to completely replace the use of animals as a food technology by 2035,” he said. “We’re dead serious about it and we believe it’s doable.”

Impossible Foods Launched Vegan Meatballs at Walmart Stores Across US