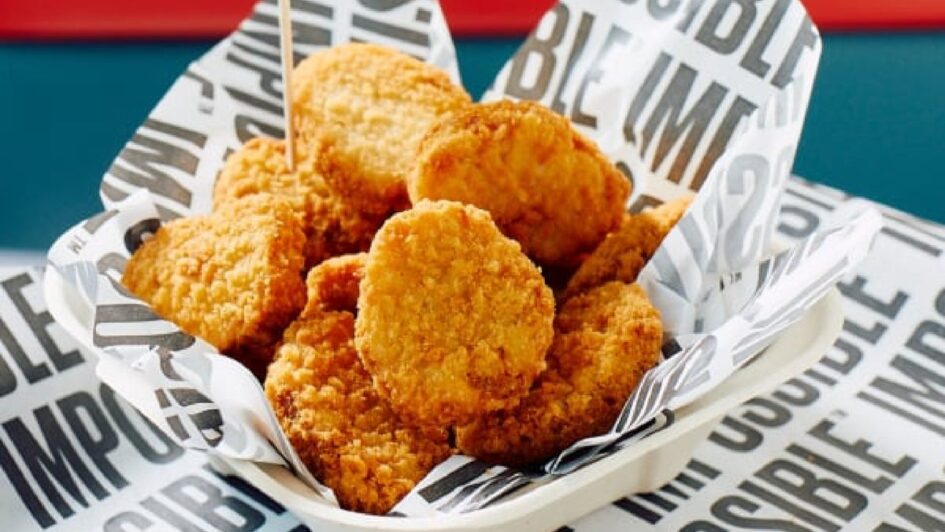 Less than two months ago that Beyond Meat chicken tenders hit the scene. Now Impossible is picking up the gauntlet and debuting a faux-chicken product of its own. Impossible chicken nuggets arrived in the U.S. on September 7. Unlike Impossible burger patties, the nuggets – available in restaurants now and in grocery store freezer sections later this month – are made without Impossible’s signature innovation, plant-based heme.

Heme, as the company’s website notes, heme is the naturally-occurring molecule that “makes meat taste like meat.” The heme used in Impossible products is created from fermented yeast. And while Impossible’s yeast heme has been fully approved by regulators in the U.S., Chinese and European Union authorities haven’t yet authorized it for sale. To get the new nuggets into those markets with greater ease, CNBC reports Impossible decided to drop the heme from the recipe. Impossible nuggets are primarily made of soy protein, sunflower oil, methylcellulose, and food starch, with a wheat-flour based breading.

Initially, the Impossible chicken nuggets will be available on restaurant menus, at locations including Crossroads, Gott’s Roadside, Fuku, Dog Haus, and Fat Burger. A full list of places to try them can be found online. Within weeks, they’ll appear at retail outlets including Walmart, Kroger, Albertsons, Safeway, and Gelson’s.

Laura Kliman, head of product development for Impossible Foods, told The Washington Post that her team labored over producing a nugget that would please picky kids and trigger those nostalgia and childlike pleasure responses in adults. “You look at the attributes that are the most important — people want that golden appearance, so the color had to be right. You want them very crispy and crunchy. And then there’s the savory, juicy, mild chicken flavor.” In a Post taste-test, both reporter Emily Heil and her 6-year-old research assistant Avi agreed that the Impossible chicken nuggets were better than many competing plant- or chicken-based nuggets.

One early taster, Engadget’s N. Cole, sampled the Impossible chicken nuggets at a Gott’s Roadside location in  San Francisco and gave the bites high marks. “They were absolutely delicious, with a crispy well-seasoned breading and a juicy, moist interior,” Cole writes. “Fresh out of the fryer, they definitely tasted better than the ‘chik’n’ nuggets from the likes of Gardein or Boca Burgers. They didn’t taste exactly like chicken either, but they were close enough that I didn’t mind. In fact, when dipped in various sauces (Gott’s serves them with ranch, BBQ sauce and honey mustard), they were indistinguishable from the real deal.”

Impossible Foods has a lot of irons in the fire (or is that fryer?) these days; Reuters recently reported that the company is prepping for an IPO which could be just a few months away. Execs are said to be looking for a $10 billion valuation – a number that would put it on par with recent massive plant-based food brand offerings.