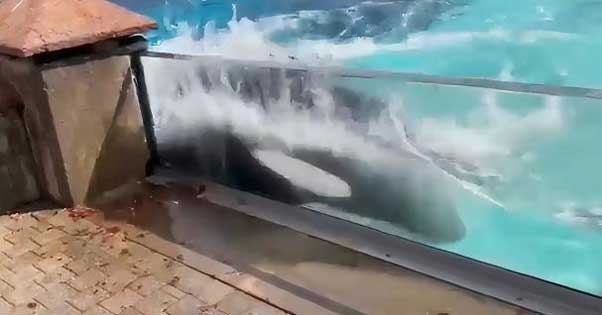 The sight and sounds of Kiska the orca as she appears to bash her head repeatedly against a tank at Marineland will haunt you, as will the rest of her heartbreaking story. On Wednesday, video footage taken on September 4 was posted to Twitter showing Kiska the orca appearing to slam her head and body she’s kept isolated in at the Canadian tourist trap.

If this isn’t the most clear, blatant example of what years and years of lonliness and marine park captivity can do to an orca, I don’t know what is. #Kiska needs help. Marineland Canada have been nothing but enablers of her torment for over 40 years. #FreeKiska pic.twitter.com/Lp359ftWan

Additional heartbreaking footage posted in July shows Kiska “floating listlessly at the surface of her concrete pool.” Across Twitter alone, the two videos combined have been viewed hundreds of thousands of times.

Decades ago, as a baby, Kiska was abducted from her ocean home—torn away from her family. In 2011, her tankmate, Ikaika, was shipped back to the U.S.—to SeaWorld San Diego—leaving Kiska alone and isolated. Years prior to Ikaika’s transfer, all five of Kiska’s Marineland-born calves died—all of them before they were even 7 years old. (In nature, orcas have an average life expectancy of 30 to 50 years—their estimated maximum lifespan is 60 years for males and 80 for females.) Had she been left in peace in nature, Kiska would likely be enjoying ocean life alongside her pod—but for the past 10 years, she has been forced to spend her days isolated in a barren enclosure, swimming alone in endless circles or floating spiritlessly inside her cramped tank.

This is Kiska. She spends her days bored and alone as the only orca at Marineland Canada. All five of her calves died before they were seven years old.

In May, Marineland took baby steps toward progress when it transferred five of the approximately 50 beluga whales imprisoned at its severely crowded park to an Association of Zoos & Aquariums–accredited facility in Connecticut. In doing so, Marineland proved that it can do a good thing—but we want it to do a great thing: release Kiska and the other animals still imprisoned at its park and send them to seaside sanctuaries. Please join PETA in speaking out—sign our petition to let Marineland know that you have no love for a tourist trap that continues to confine and exploit any animals:

Sign Our Petition: ‘I Have No Love for Marineland’