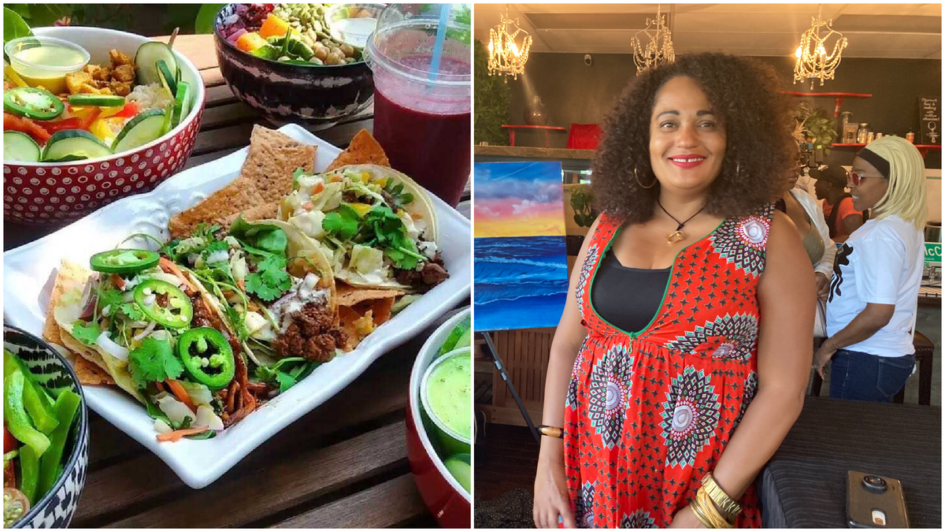 “I can burn pretty well in the kitchen,” says Tabota Seyon, proprietor of InfusedLife in Minneapolis. Billed as a ‘plant-based emporium,’ the space combines a vegan cafe and catering operation with a beautiful, art-filled boutique stocked with gifts, lotions, tinctures and other wellness-minded items. Opened in July, 2021 it has already become a local community hub. Which isn’t surprising for those who know Seyon.

Among friends and family, she’s well-known for her hospitality. “I’m one of those people who’s like, ‘Oh, you don’t have family here in town? Well, come over for Thanksgiving,” she says. Seyon, who was born and raised in Minneapolis, became interested in food as a source of healing as a kid, when both she and her mother faced health problems. She took to cooking from a young age and always enjoyed it, and excelled at making food that was also really healthy.

In her North Minneapolis neighborhood, Seyon became known for her cooking, making batches of jerk jackfruit tacos and other plant-forward fusion dishes. Her home-made hummus became favorite; she makes it with almond and beets, the latter adding nutrients, flavor, and, of course, color. “It becomes a nice conversation piece,” Seyon says. “Because people were like, ‘What am I eating?’ It’s pink, but it tastes so good.”

Groups started to request her cooking for church get-togethers, political events, family parties, street fairs, and more. “I realized that I had found a niche and didn’t really mean to. It just happened to be the way that I cook naturally,” she says. “Globally inspired food is pretty much my niche. Foods that are infused with different flavors that you might not have tried together before.”

Before opening the restaurant, Seyon had a long history of doing social development work for nonprofits. She would coach people about how to enter new careers and start businesses. Eventually, she began to question if she could use some of that advice on herself. “As time went on, I started asking myself more of a more courageous questions like, ‘Well, what do I want?’” she says.

She realized cooking was an opportunity to feel more fulfilled.

“I’m creating a lifestyle not only for myself, but to support the lifestyles of others in the community who have an interest in being more thoughtful and more intentional about what they put into their bodies,” she says. “The reason why I created the name InfusedLife is because I’m not just a mom, I’m an artist, I’m a chef, I’m an entrepreneur, I’m a traveler, I’m a spiritual woman. So that’s a part of my infusion, not just my food.”

She decided to move forward with her business at the beginning of 2020, but her plans were soon interrupted – first by the pandemic, and then by civil unrest in the city after the killing of George Floyd. She was renting a space a the Midtown Global Market on Lake Street in Minneapolis, just a mile from where the 3rd precinct burned down. “After the riots and everything, I decided that wasn’t a good place for me to be, and so I decided to work on the goal of expanding my business and be in a more comfortable, safer area with more space,” Seyon recalls. She was not about to give up her dream.

That summer, Seyon worked a number of outdoor festivals, and served up her tasty “Infused Life” food on Saturdays for three months at a street fair in South Minneapolis. “I got a lot of really good reviews and had a lot of regular customers,” she recalls of the pop-ups. In November, she leased a new space – this time in South Minneapolis near a light rail stop – and has worked since to create a cozy ambiance, surrounded by her own colorful paintings.

“I’ve always wanted to be able to have a space where I can display my art,” Seyon says. Having been formally trained in art school, she’s shown her work in galleries before, but she likes that her paintings now have a permanent home. The storefront has sunlit seating areas, a small bar that looks into the kitchen, and room for visitors to peruse the array of vegan soaps, teas, and books. Warm and eclectic, it’s not just a store or a restaurant, but an experience. Seyon plans to host special events at the shop, including DJ nights and community conversations.

“The goal is to make this a community space for people to use it as needed,” Seyon says. She anticipates many future conversations about the intersections of health and culture, particularly within the Black community, but also more broadly. “How we go about working intentionally to support one another,” she asks. “Not only in economics, but also in healing and emotional health and physical health?”