Is Animal Sacrifice Banned in India? 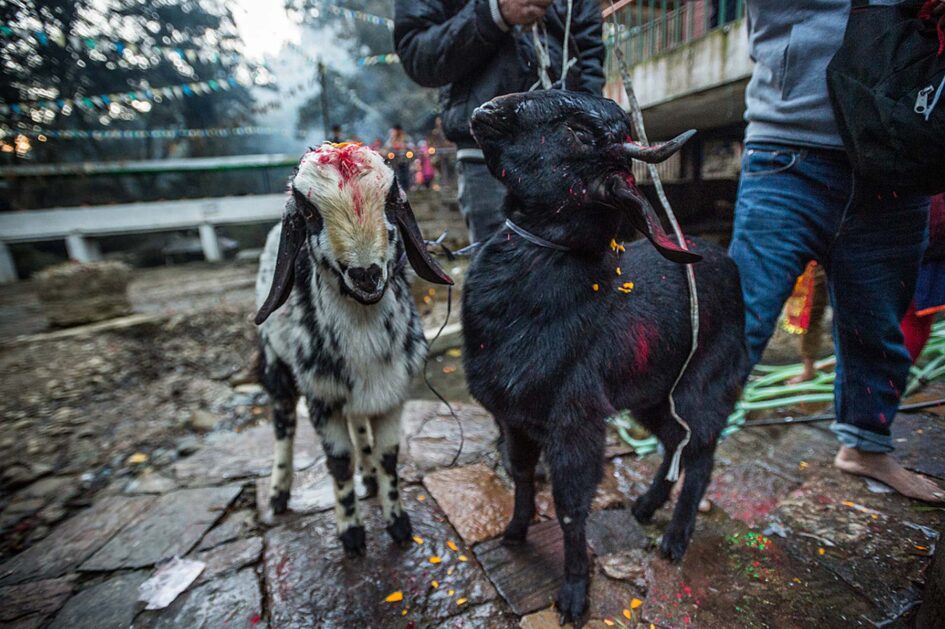 Animal sacrifice is still a major issue in India. Many sacrifices are associated with religious festivals, such as Dussehra or Eid-ul-Adha, but others appear to be championed by the animal agriculture industry. While the ritual slaughter of animals at Gadhimai in Nepal has long been in the international spotlight, sacrifices take place all over India but receive a lot less attention. Here we take a look at just three that take place, and find out how campaigners are working to end these cruel practices.

Navratri is a nine-day Hindu festival dedicated to the nine forms of the goddess Durga. The traditions associated with this celebration vary. Some people fast and eat healthy foods such as amaranth, millet, fruits and vegetables. Others, particularly in areas like West Bengal, consume a lot of animal products, and – on the tenth day, which is known as Dussehra – sacrifice animals, usually goats. In 2018, the Deccan Chronicle reported that thousands of goats and sheep had been sacrificed to roadside deities, and that the whole area was covered in blood.

Gatari Amavasya is the last day before Shravan, a month devoted to worshipping Lord Shiva, and a month when very few animal products – apart from dairy – are eaten. And so, in some areas, the day before this abstinence from nonvegetarian foods and alcohol, many people sacrifice and eat animals and drink to excess. This festival is commonly celebrated in Maharashtra and some parts of neighboring states.

This is an Islamic festival which honors the willingness of Ibrahaim to sacrifice his own son to God. The celebrations can last up to four days, with the act of Qurbani (sacrifice) being central. Sheep, lambs, camels and goats may be killed with their meat distributed between family, community, and those in poverty. Although illegal in India, cows may also be sacrificed during this festival.

The Law on Animal Sacrifice in India

Many Indian states prohibit religious sacrifice of any animal in any temple or its precincts, but a loophole allows people to take animals to the temple for a priest to make a small cut, before they are taken to a slaughter shop nearby.

Other states have banned all public animal sacrifice. In 2014, for example, Himachal Pradesh High Court passed an interim order specifically banning the organisers of Dussehra from performing sacrifices publicly. Justices Rajeev Sharma and Sureshwar Thakur said, “A startling revelation has been made as thousands of animals are sacrificed every year in the name of worship. Sacrifice causes immense pain and suffering to innocent animals. They cannot be permitted to be sacrificed to appease a god or deity in a barbaric manner.” That order lasted three years until in 2017, animal sacrifice resumed.

The Battle for Compassion

Animal protection groups such as People for Animals and PETA, and politicians like Maneka Gandhi, are working to bring an end to animal sacrifice.

Spiritual leaders like Acharya Prashant also speak out against ritual and other forms of animal slaughter, but there is much at stake, and not just for animals. When Narendra Dabholkar, a social activist, campaigned to stop people blindly following superstitions like ritual sacrifice, he was assassinated in broad daylight.

Progress is happening but it does not happen uncontested. While five courts have ruled against ritual sacrifice, four of those have been appealed in the Supreme Court, with the judgments currently being defended by the Animal Welfare Board of India and Gauri Malekhi. We thank them for the important work they do to end this cruelty, and encourage others to follow the inspirational Gauri Malekhi for updates on those cases.