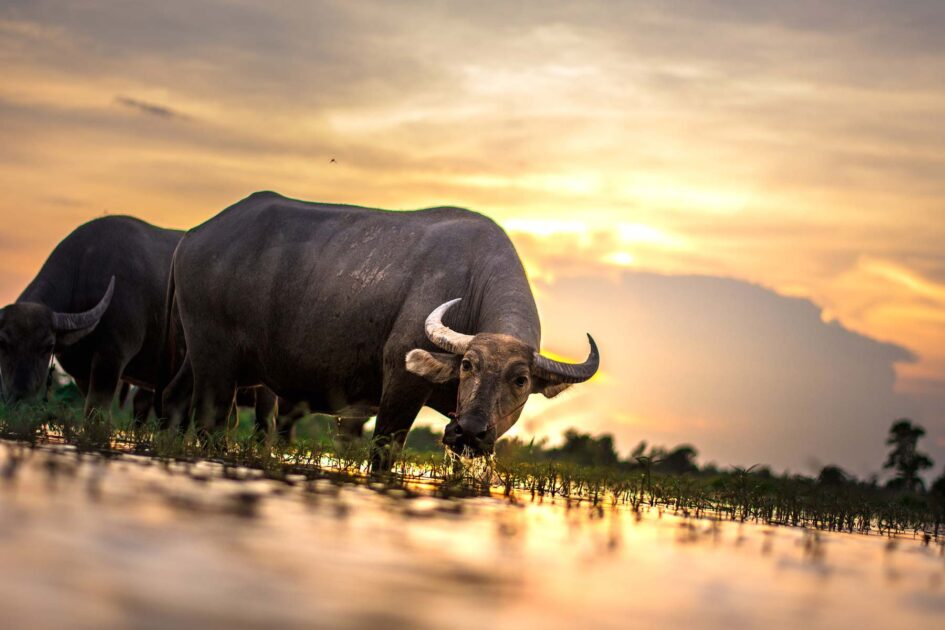 For many Hindus, cows are considered sacred, and there is a current ban on their slaughter in most Indian states. However, buffaloes, who are also bovines, are less venerated, and are slaughtered across the country. And, although some states prohibit the slaughter of young buffaloes, this does not mean they are well cared for.

Is Buffalo Meat Legal In India?

It is legal to consume buffalo meat throughout India and even some Hindus, for whom cows are sacred, eat it.

In Which Indian States Beef Is Banned?

There are no national laws on the slaughter of cows, and so the various states and union territories have developed their own legislation. This means the definition of ‘bovines’ also differs from state to state. Many states prohibit the slaughter of cows, including calves. Somet permit slaughter for animals over a certain age (usually 10 or 14) and some states have no regulations at all. And although beef is banned in the states where cow slaughter is banned, cows are often slaughtered illegally and their meat sold as buffalo.

What Is Buffalo Meat Called In India

Confusingly, the flesh of buffaloes is often called ‘beef’, just as the flesh of cows is, although sometimes it is referred to as ‘carabeef’.

There are significant health problems associated with the consumption of meat, and in particular red meat, like buffalo. One key issue is that it is linked to cancer, and is designated a ‘probable carcinogen’ by the World Health Organization. And when any meat is cooked at high temperatures, such as when it is fried, grilled or roasted, the cancer risk increases further. Red meat is also linked to a raised risk of heart disease, obesity type 2 diabetes, and premature mortality. So, no. We wouldn’t say that eating buffalo is healthy.

The health implications of eating buffalo and other red meats are serious enough, but there are other reasons to avoid it, too.

There are just 4,000 registered slaughterhouses in India, and more than 25,000 unregistered premises that operate illegally. In 2019, Member of Parliament Maneka Gandhi visited an illegal buffalo slaughterhouse and wrote: “I entered and we found ourselves knee deep in blood, thousands of freshly hacked bones, and flies. The place was like the worst part of hell that one can imagine. The factory was not a secret operation. It was a large well-built structure and could not have operated if the police were not part of the pay-off system. The local police commissioner was found to be part of this.”

Reports of the theft of buffaloes are incredibly common, and in many cases, the robbery is violent.
If the perpetrator is found, there can be severe consequences. Suspected buffalo thieves have been beaten to death by mobs.

In India, diet is inextricably linked to caste and religion, and although the caste system is now illegal, its legacy persists. In India, as elsewhere, the most oppressed people have the fewest opportunities, and it is still seen as the role of Dalits to do the messy, unclean, impure work that others will not do. This includes slaughtering animals.

Dalits traditionally could not afford wheat and rice, and it was considered a sin for them to eat milk, ghee and curd. Instead, they had to eat “unholy” or “impure” foods including offal and pigs’ meat. Today, when they celebrate their cultural heritage with food-based festivities, they can become victims of violence. They are punished for the very acts they were forced into.

The term Dalit means ‘oppressed’, ‘broken’ or ‘crushed’ and the name was chosen by the community to represent their treatment by society.

The milk industry in India, from which most buffalo meat comes, exists because millions of families keep an animal or two. The milk can provide each family with food or income, and the animals themselves can be sold. For many people, keeping buffalo is seen as an economic imperative.

As with all animals reared for dairy, buffalo have to be pregnant in order to produce milk (after all, the milk is produced to feed a baby; it doesn’t just flow). With pregnancy comes a baby buffalo. In India, milk is valued above meat, and consequently female animals are valued above male. Baby male buffalo may have their throats cut at birth or simply be abandoned to die of starvation.

And it’s not just the young who suffer. Multiple investigations have found appalling conditions and treatment of adult buffaloes on farms. In just one of these, PeTA found buffaloes knee-deep in foul-smelling excrement, suffering from skin infections, foot disease and other illnesses. The animals were kicked by workers to make them stand, while injured animals were hit with sticks and pulled by their tails. Bleeding buffaloes were denied veterinary care. Being of economic value does nothing to prevent these poor animals from being abused.

Vigilantism is all too common in India, where people may be killed for eating beef, for slaughtering cows or for being suspected that they may do one of these. Such attacks are thought to be connected to the recent rise in Hindu nationalism, a sector of society for whom cows are sacred.

The victims, who are often Muslims, may also be attacked for buying, selling or slaughtering buffaloes. Shockingly, such attacks often appear to be sanctioned by authorities. Writes investigative journalist Mohammad Ali: “In an analysis of 14 vigilante killings by ‘cow protection’ groups… between 2015 and 2018, Human Rights Watch found that police ‘initially stalled investigations, ignored procedures, or even played a complicit role in the killings and cover-up of crimes.’”

What Can You Do?

Those who are concerned about animal rights, human rights, their own health and / or the environment can, wherever possible, make changes in their diet to reduce or exclude meat and other animal products. This does not have to be done all at once but the fewer animal products consumed, the better. We can start today by examining where we can make changes. Cutting out animal products does not have to mean a loss of flavor, enjoyment or cultural tradition. Most foods we love can be made vegan, though we understand that access to fresh ingredients and ability to cook them will depend on individual circumstances. We urge all those who have a choice to choose animal-free foods to help protect animals, their health and the planet for us all.

Inherent in the buffalo meat industry is animal suffering, human suffering, a raised risk of public health outbreaks, and a significant contribution to climate change. Our world would be kinder – and our planet safer – if all those who can do so choose to eat plant-based foods.

Want to know more about the Indian meat industry? Read this.

Ready to try a plant-based diet for 31 days? Register with us for 31 days of practical and motivational emails, recipes and nutrition information.